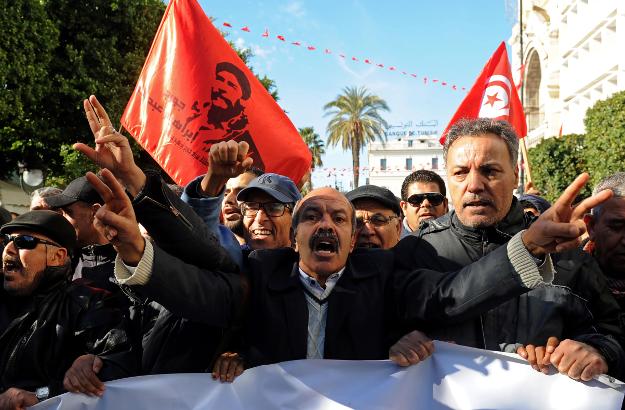 Seven years after the outbreak of the Arab Spring in North Africa, demonstrators are taking to the streets again. In Tunisia, protesters demand change to new austerity laws, which compound already stagnant economic conditions and youth unemployment. Protests have also occurred in the small town of Jerada in Morocco following the deaths of two young miners. Both of these movements reflect ongoing socio-economic inequalities and were met with governmental crackdown.

How do these protests compare with each other, and to previous waves of uprisings across the Arab World since 2011? How are these activists starting new conversations around social, economic, and political issues in their countries?

The Middle East Institute (MEI) is pleased to host a panel discussion examining the social and economic drivers behind these demonstrations, as well as prospects for resolving these inequities. MEI's senior vice president for policy research and programs, Paul Salem, will moderate a discussion with Aymen Abderahmen (Barr al Aman), Intissar Fakir (CEIP), Dokhi Fassihian (Freedom House), and William Lawrence (GWU) to discuss these issues.

Speaker Biographies:
Intissar Fakir
Editor-in-chief of Sada, Carnegie Endowment for International Peace
Intissar Fakir is editor in chief of Sada. Her professional experience has focused primarily on the Middle East and North Africa and issues of political reform, democratization, and socioeconomic development. Prior to joining Carnegie, she was special assistant to the vice president for strategy and policy at the National Endowment for Democracy.
Fakir was previously the managing editor of the Arab Reform Bulletin, the precursor to Sada, at Carnegie. She has also worked on implementing democracy and education assistance programs in the Middle East. She has consulted for the political risk advisory firm Eurasia Group and has contributed to a number of newspapers and publications including the Daily Star and the Guardian.

Dokhi Fassihian
Senior program manager, Middle East and North Africa, Freedom House
Dokhi Fassihian is senior program manager for Middle East and North Africa. Before joining Freedom House, she led several nongovernmental organizations working in the area of democracy and human rights and promotion. Through her work at the Democracy Coalition Project at the Open Society Foundations, Ms. Fassihian led multilateral strategies at the United Nations, where she monitored the state of democracy and human rights around the world and tracked the foreign policies of governments on human rights priorities. In this role, she also facilitated the work of domestic, regional and cross-regional civil society coalitions on a broad range of thematic, emergency, and chronic human rights situations around the world. She has also led successful programs that have led to the protection of UN human rights mechanisms and bodies and strong passage of UN human rights resolutions at the UN Human Rights Council and UN General Assembly. Before joining DCP, Ms. Fassihian was the executive director of the National Iranian American Council.

William Lawrence
Visiting Professor of Political Science and International Affairs, George Washington University (GWU)
William Lawrence is a visiting professor of political science and international affairs at GWUs Elliott School, a fellow at the Tangiers American Legation Institute for Moroccan Studies, and a board member and past president of the American Tunisian Association. Since 2011, he has served as Associate Director for MENA at Control Risks, MENA Programs Director at the Center for the Study of Islam and Democracy, and North Africa Director at International Crisis Group. Previously, he served in a number of positions at the State Department, from 2009-2011 as senior advisor for global engagement at the U.S. State Department’s Bureau of Oceans and International and Scientific Affairs. He co-authored After the Uprisings: Political Transition in Tunisia, Libya, and Yemen and has published widely on North Africa. He co-wrote and produced the film Marrakech Inshallah funded by the National Endowment of the Arts and co-created five other MENA-related documentary films and 14 albums of North African music, including the first internationally released Arab rap song.

Paul Salem
Senior vice president for policy research and programs, MEI
Paul Salem is senior vice president for policy research and programs at MEI. He focuses on issues of political change, transition, and conflict as well as the regional and international relations of the Middle East.  He has a particular emphasis on the countries of the Levant and Egypt. Salem writes regularly in the Arab and Western press and has been published in numerous journals and newspapers. Salem is the author and editor of a number of books and reports including From Chaos to Cooperation: Toward Regional Order in the Middle East (ed. with Ross Harrison, 2017), Broken Orders: The Causes and Consequences of the Arab Uprisings (In Arabic, 2013), “The Recurring Rise and Fall of Political Islam” (CSIS, 2015), “The Middle East in 2015 and Beyond: Trends and Drivers” (MEI 2014), Bitter Legacy: Ideology and Politics in the Arab World (1994), Conflict Resolution in the Arab World (ed., 1997).  Prior to joining MEI, Salem was the founding director of the Carnegie Middle East Center in Beirut, Lebanon between 2006 and 2013.  From 1999 to 2006, he was director of the Fares Foundation and in 1989-1999 founded and directed the Lebanese Center for Policy Studies, Lebanon's leading public policy think tank.