The (Soft) Power of the Arts in a Changing Middle East 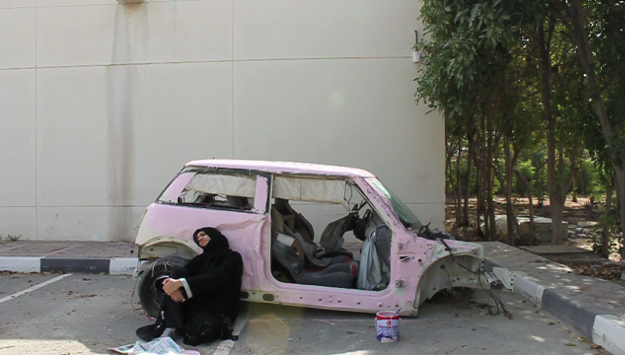 The Middle East institute is pleased to host a discussion about the growing impact and influence of the region's increasingly dynamic arts scene with rising Saudi artist Sarah Abu Abdallah, Stephen Stapleton, artist and director of Edge of Arabia, a collective of contemporary Saudi artists, and Oussama Rifahi, executive director of the Beirut-based Arab Fund for Arts and Culture (AFAC), which provides grants to Arab artists.

The panelists will discuss the transformational social role that artists are playing in their societies, as well as the challenges and opportunities that both artists and art platforms face as they seek to increase and enhance contemporary art and culture production in the Arab world. The event will be moderated by Kate Seelye (The Middle East Institute).

Sarah Abu Abdallah is an artist working primarily with video and film as a medium. She grew up in Saudi Arabia and is currently pursuing her masters degree in Digital Media at the Rhode Island School of Design in Providence, RI. Her recent engagements include the exhibition, Arab Contemporary in the Louisiana Museum of Modern Art in Denmark; Migrating Forms in New York; the Serpentine Galleries 89plus Marathon in London; the 11th Sharjah Biennial in the UAE; and Rhizoma in the 55th Venice Biennale. She contributed to ArteEast's recent symposium, Arts and Culture in Transformative Times, and the Moving Image panel on Video + Film at Palazzo Grassi in Venice.

Oussama Rifahi joined the Arab Fund for Arts and Culture as executive director in July 2010. Previously, he was managing director for museum development in New York for Global Cultural Asset Management, and provided cultural consultancy services to governments, cities, foundations, and private collectors in Europe, the Middle East and Central Asia. As director of special projects for the Guggenheim Foundation, Rifahi led feasibility studies of modern and contemporary museums in Europe and supported the initial negotiations between Abu Dhabi and the Louvre and Guggenheim museums.

Photo: Sarah Abu Abdallah, Still from "Saudi Automobile" (2012) [Courtesy of the artist and Edge of Arabia]