Understanding the Taliban: What Do They Want? 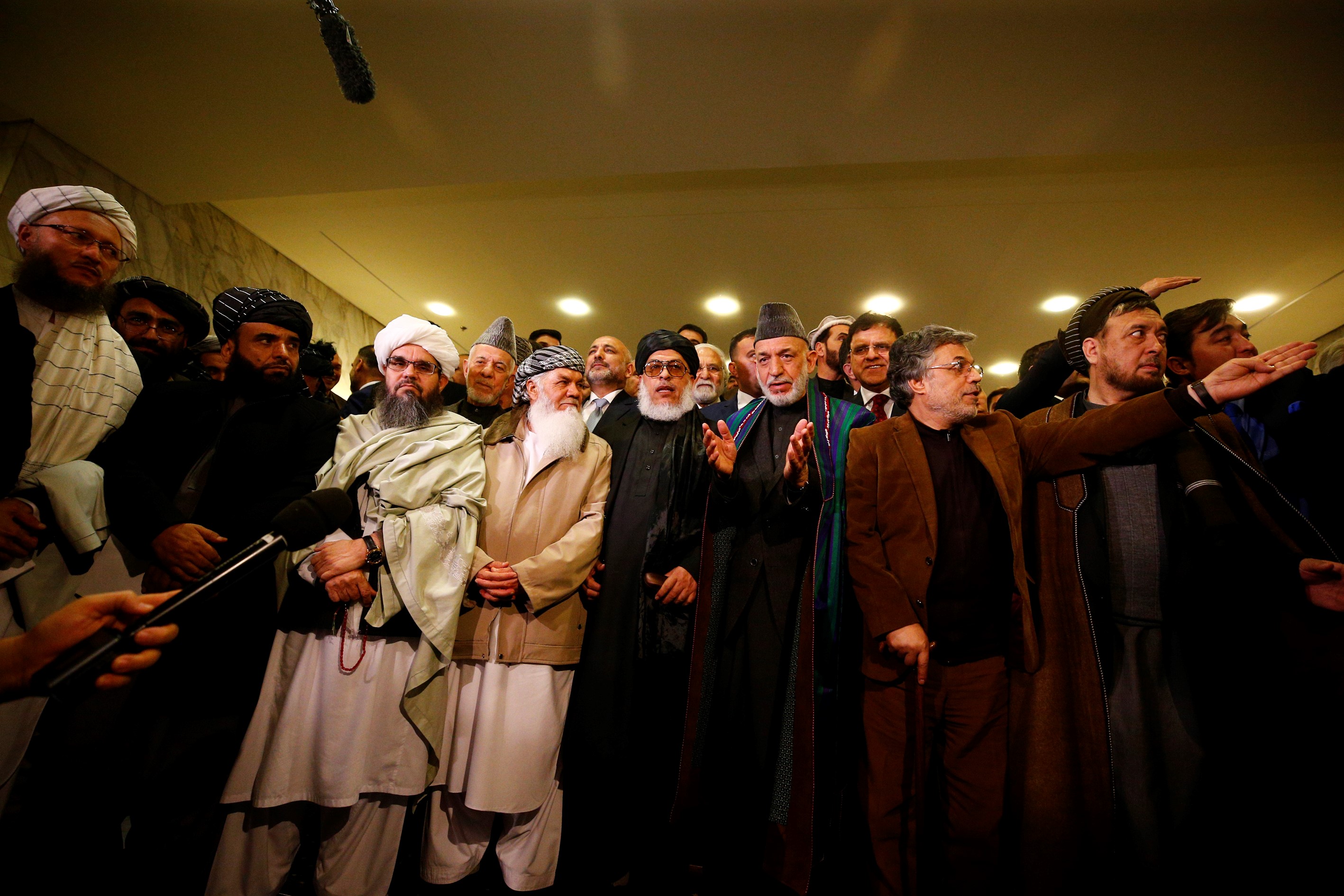 Although the long-awaited end to the war in Afghanistan might still be far off, U.S. Special Envoy Zalmay Khalilzad described the latest round of Afghan peace talks between the United States and the Taliban as the “most productive” yet. But who exactly are the Taliban, and what are they looking to gain from such negotiations? MEI Afghanistan and Pakistan Program Director Marvin Weinbaum joined several Afghanistan experts to assess where the organization is now.

Despite drawing many recruits from Pakistan, Central Asia, and the Caucasus, the organization has tried to reframe its message in order to better appeal to the Afghan people. “They want to give the impression that they are fighting against occupation,” Ambassador Omar Samad said.

As part of this effort to modernize their message, spokespeople for the Taliban have even gone so far as to discuss issues such as constitutional rights and women’s health care.

Candace Rondeaux pointed out that the organization’s command structure and military effectiveness have evolved as well. “There is a command and control structure that is strong enough that national order can be issued and actually followed,” she said.

Today, the Taliban even has its own military courts and military justice system and has emphasized the importance of not hitting civilian targets, although Rondeaux noted that the group defined military targets differently than the Geneva convention does.

According to Ahmad Majidyar, these changes stem from “local pressure” on the organization, which has become more firmly embedded in local communities. As a result, the Taliban has allowed schools for girls to open in some parts of the country.

But not everything has changed. Majidyar emphasized that the Taliban “maintains very deep connections with regional and international terrorist groups despite the pledges that the Taliban have made to the United States recently.”

Majidyar recommended looking to the organization’s actions rather than their words. “Their views on when it comes to human rights and women's rights have not changed,” he said. “There are more than 10 districts in Afghanistan that are under complete control of the Taliban and in those districts there [is not a] single girls school.”

Looking at the Taliban today, William Maley posited that the organization’s consistent demand for negotiations with the United States stems from Thomas Hobbes’ theory that “reputation of power is power.”

According to Maley, negotiating with a foreign power like the United States instead of the Afghan government gives the group a semblance of legitimacy. “That matters in Afghanistan because ordinary people may not have a great sense of the complexities of the constitution, but they tend to have an acute understanding of the evolution of power dynamics because that's central to day to day survival.”

Samad added that the American desire to leave Afghanistan before the 2020 U.S. presidential elections and disunity in the official Afghan government have given the Taliban an opportunity to increase their sway in the country. Moreover, many countries including the United States have declined to label the group a terrorist organization in order to leave the door open for a reconciliation process.

Warning against the tendency to look at the situation from a “narrow political perspective,” Samad noted that Western officials and experts often do not see the situation on the ground realistically. “At the end of the day it is the Afghan people who are going to suffer.”

While peace negotiations with the Taliban have gained momentum, many questions  remain unanswered about their vision for Afghanistan’s future. How have the Taliban evolved over the past 17 years? What do they aim to achieve in the current negotiations? Who makes the decisions, and does their negotiating team represent the broader Taliban movement, much less other elements of the insurgency? Why is the militant group willing to negotiate with the U.S. but not with the Afghan government?

Also, what assurances are there that the Taliban will honor their promises, including those involving human rights and the presence of terrorist groups on the Afghan soil? Would the Taliban settle for sharing power, or is it aiming to monopolize power? Most important, are the Taliban’s goals for Afghanistan compatible with the principles of a democratic constitutional order?

William Maley
Professor, Asia-Pacific College of Diplomacy, Australian National University
William Maley is professor of diplomacy at the Asia-Pacific College of Diplomacy, where he served as foundation director from July 2003 to December 2014. He taught for many years in the School of Politics, University College, University of New South Wales, Australian Defence Force Academy, and has served as a visiting professor at the Russian Diplomatic Academy, a visiting fellow at the Centre for the Study of Public Policy at the University of Strathclyde, and a visiting research fellow in the Refugee Studies Programme at Oxford University. He is a Barrister of the High Court of Australia,vice president of the Refugee Council of Australia, and a member of the Australian Committee of the Council for Security Cooperation in the Asia Pacific. In 2002, he was appointed a Member of the Order of Australia (AM). In 2009, he was elected a fellow of the Academy of the Social Sciences in Australia.

Ahmad Majidyar
Senior fellow and director of IranObserved project, MEI
Ahmad Majidyar is a senior fellow and the director of IranObserved project at the Middle East Institute. From 2008 to 2015, Majidyar worked as a senior research associate at the American Enterprise Institute (AEI), where he co-authored two monographs on Iran: Iranian Influence in the Levant, Egypt, Iraq and Afghanistan (AEI 2012), and The Shi’ites of the Middle East: An Iranian fifth column? (AEI 2014). He also published a number of research papers on Iran, Afghanistan and Pakistan. As an instructor with the Naval Postgraduate School’s Leadership Development and Education for Sustained Peace program (2008-2016), Majidyar provided graduate-level seminars to more than 3,000 U.S. and NATO military leaders on Afghanistan and the broader region. In addition, he has provided briefings on Iran and Afghanistan at the Defense Intelligence Agency, the Joint IED Defeat Organization, the National Defense University, the State Department, and Congress; and he has spoken as a guest analyst at think tanks, universities, and world affairs councils.

Candace Rondeaux
Professor of Practice, Arizona State University; Senior fellow of International Security Program, New America
Candace Rondeaux is a professor of practice in the School of Politics and Global Studies at Arizona State University (ASU) and a senior fellow with the Center on the Future of War, a joint initiative of ASU and New America. An expert on international security affairs, she has previously served as a senior program officer at U.S. Institute of Peace where she launched the RESOLVE Network, a global research consortium on conflict and violent extremism and as a strategic advisor to the U.S. Special Inspector General for Afghanistan Reconstruction. She spent five years living and working in South Asia where she served as senior analyst in Afghanistan for the International Crisis Group and as South Asia bureau chief for The Washington Post in Afghanistan and Pakistan. Her research interests include the dynamics of conflict and sectarian violence, transparency and accountability in governance, political Islam in modern Muslim majority states, Russian and post-Soviet affairs. In addition to the Post, her work has been featured in Lawfare, Foreign Policy, Foreign Affairs, The International Herald Tribune, The Boston Globe, The Russia Journal and The Village Voice. She has also been a frequent guest analyst on CNN, Al-Jazeera, BBC World and National Public Radio. Prior to her postings in South Asia, she produced award winning journalism on criminal justice and legal affairs, contributing to Post’s Pulitzer Prize winning coverage of the 2007 Virginia Tech Massacre, coverage of Hurricane Katrina and the Terri Schiavo case for The St. Petersburg Times in Florida, and the 9/11 attacks in New York for the investigative team at The New York Daily News.

Ambassador Omar Samad
Nonresident senior fellow, Atlantic Council
Omar Samad is a non-resident senior fellow with the Atlantic Council South Asia Center in Washington D.C., dealing with South and Central Asia, U.S.-Afghanistan, geopolitical and reconciliation issues. He is also CEO of Silkroad Consulting LLC, based in Virginia­­­. He resigned as Afghan ambassador-designate to Belgium and the EU in April 2016. Prior, from December 2014 to January 2016, he worked as senior advisor for policy and strategy to the Chief Executive of Afghanistan in Kabul. Previously, he was senior Central Asia fellow at New America Foundation (2013-2014) and senior Afghan expert at the United States Institute of Peace (2012-2013). He was Afghan ambassador to France (2009-2011) and to Canada (2004-2009), after serving as the spokesperson for the Ministry of Foreign Affairs (2001-2004). He taught an Honors Seminar on “Radicalism Within Islam, Drivers and Policy Options” at the University of Maryland in 2017. Ambassador Samad earned a master’s degree in International Relations from The Fletcher School in 2006. He earned a B.A. in Communications from the American University in Washington, D.C. in 1991. He writes extensively and is a regular media contributor and commentator. He is fluent in English, French and Farsi/Dari.

Marvin Weinbaum (moderator)
Director for Afghanistan and Pakistan studies, MEI
Marvin G. Weinbaum is professor emeritus of political science at the University of Illinois at Urbana-Champaign, and served as analyst for Pakistan and Afghanistan in the U.S. Department of State's Bureau of Intelligence and Research from 1999 to 2003. He is currently director for Pakistan Studies at the Middle East Institute. At Illinois, Dr. Weinbaum served for fifteen years as the director of the program in South Asian and Middle Eastern Studies. His research, teaching, and consultancies have focused on the issues of national security, state building, democratization, and political economy in Afghanistan and Pakistan. He is the author or editor of six books and has written more than 100 journal articles and book chapters. Dr. Weinbaum was awarded Fulbright Research Fellowships for Egypt in 1981–82 and Afghanistan in 1989–90, and was a senior fellow at the United States Institute of Peace in 1996–97. He has been the recipient of research awards from the Social Science Research Council, the Ford Foundation, the American Political Science Association, and other granting agencies.