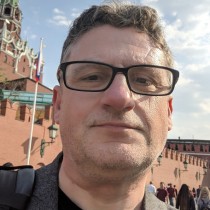 Mark Galeotti is a specialist on Russian politics and security affairs. He is an Honorary Professor at UCL SSEES, Senior Associate Fellow at RUSI, and a Senior Non-Resident Fellow at the Institute of International Relations Prague. He also runs his own consultancy, Mayak Intelligence. He read history at Robinson College Cambridge and took his doctorate in government at the LSE, and has since been Head of History at Keele University, a Senior Research Fellow with the Foreign Office, Professor of Global Affairs at New York University, and a visiting professor at Rutgers-Newark (Newark, NJ), Charles University (Prague), the European University Institute (Florence), and MGIMO (Moscow).

He advises on Russian politics and activities abroad to a wide range of audiences, from the British House of Commons Foreign Affairs Committee to the NATO Parliamentary Assembly, the FBI to commercial organizations. He is currently working on a study of future forms of non-kinetic conflict and an exploration of the impact of the Russian intelligence and security services on the country's politics, business, and society.

Education:
BA/MA in History from Cambridge University
PhD in Government from the LSE