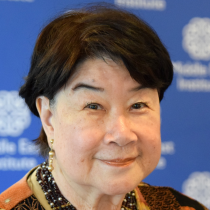 Molly Williamson speaks extensively on U.S. foreign policy. She is a scholar with the Middle East Institute, a consultant, and a member of the Boards of the International Executive Service Corps, the American Academy of Diplomacy, and Noble Energy. She is a retired Foreign Service Officer, having served six U.S. Presidents, achieving the rank of Career Minister.

Williamson has had a unique combination of senior executive policy positions in four Cabinet Departments of the government. Her postings include: senior foreign policy advisor to the U.S. Secretary of Energy, Deputy Assistant Secretary in the Departments of State, Defense, Commerce, U.S. interim ambassador to Bahrain, and Chief of Mission and Consul General in Jerusalem during the Madrid Peace process which culminated in the Oslo Accords.

Williamson, a native of California, has been trained in both Arabic and Hebrew. She has won numerous awards for her many diplomatic accomplishments, including two Presidential Service Awards, as well as eighteen awards from the Secretaries of State, Commerce, Defense, and Energy.