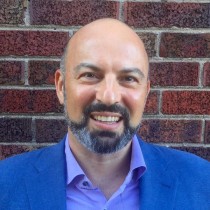 Sam Dagher is an American-Lebanese journalist and author who has lived and worked in the Middle East for more than 16 years. He was the only reporter for a major Western media outlet based fulltime in Damascus in 2012-2014 and writing openly under his byline. He was briefly detained by Assad’s henchmen in an underground prison and later expelled for reporting deemed unfavorable to the regime. Sam contributes to The Atlantic and before that was senior correspondent at The Wall Street Journal and previously reported for The New York Times, The Christian Science Monitor, and Agence France Presse. He has covered some of the biggest stories since 9/11 including the conflict in Iraq and Arab Spring uprisings. Sam was among the first reporters to shed light on the Assad regime’s brutal surrender-or-starve tactics and the influx of Iran-backed sectarian militias into Syria, atrocities of Libyan militias and their looting of one of Africa’s largest weapons depots, the role of the Arab-Kurdish dispute in northern Iraq in fueling the rise of ISIS, corruption in Iraq’s Kurdistan region and the shortcomings of the U.S. Awakening program to rally Iraqi tribes against Al-Qaeda. The Wall Street Journal submitted Sam’s work from Syria for the Pulitzer Prize and other journalism awards.

Sam’s book “Assad or We Burn the Country: How One Family’s Lust for Power Destroyed Syria” was picked as one of the best of 2019 by The Economist, The Guardian and Kirkus Reviews and has garnered accolades from senior diplomats & former top security officials in the U.S. and Europe.

Education
Bachelor’s in economics and political science, University of Michigan.