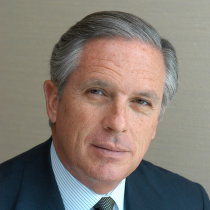 Brian C. McK. Henderson is the founding partner of Henderson International Advisors, LLC. He has devoted over forty-three years to the international and domestic financial services industry. His unique expertise includes senior international client relationships in both public and private sectors, as well as senior management experience and corporate governance.

Currently, Mr. Henderson serves as a senior advisor to Rockefeller Capital Management, non-executive Chairman of Agustea Bunge Maritime Ltd., a joint venture between Augustea Holding S.p.A. and the Bunge Group. He also serves as an Independent Director for Banque Marocaine du Commerce Extérieur/BMCE Bank of Africa, also serving as a Member of the Comité Risques. He recently joined the Advisory Board of the law firm Cremades & Calvo Sotelo, Madrid, Spain.

In fulfilling his civic responsibilities to the City of New York, Mr. Henderson served on the Ethics and Policy Committee of the DDC for the First Judicial Department, Supreme Court Appellate Division, State of New York. Past board service included the Board of Trustees for the National Museum of the American Indian, Smithsonian Institution, and trustee of the American Indian College Fund.

Mr. Henderson is a graduate of Georgetown University’s School of Foreign Service. He also attended the University of Barcelona and Edinburgh University. He is fluent in Spanish, Portuguese, Italian and French, with a working knowledge of German and Russian.