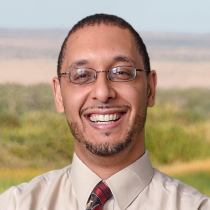 Senior Fellow and Director of the Climate and Water Program

Mohammed Mahmoud is the director of the Climate and Water Program and a senior fellow at the Middle East Institute. His areas of expertise include climate change adaptation, water policy analysis, and scenario planning. Previously, Mohammed was a senior policy analyst with the Central Arizona Water Conservation District, where he provided research, modeling, and analysis on inter-state Colorado River Basin programs and binational water issues between the United States and Mexico. In addition, he is a faculty associate with Arizona State University.

Mohammed has also held leadership positions in several organizations, most recently as chair of the Water Utility Climate Alliance, a coalition of 12 of the nation’s largest water utilities that collectively provide water to over 50 million people in the United States, with the purpose of providing leadership and collaboration on climate change issues that affect water agencies. Prior to that Mohammed was president of the North American Weather Modification Council, an organization dedicated to advancing research and development activities that increase the scientific knowledge and proper use of weather modification applications.

Mohammed has conducted water management research and work for the Middle East and North Africa region; most extensively on the Nile River Basin. His research on the Nile River Basin focused on the development of water resources in the basin, analysis of Nile water-sharing agreements, Nile River water supply and flow, and impact of the Grand Ethiopian Renaissance Dam on downstream water users. Mohammed’s other water management work in the region explored formalizing the administration of Saudi Arabia’s groundwater resources by using other established groundwater management frameworks as case study templates; such as Arizona’s 1980 Groundwater Management Code.

Mohammed’s educational background includes a B.S. and M.S. in Civil Engineering from Michigan Technological University, and a PhD in Hydrology and Water Resources from the University of Arizona.