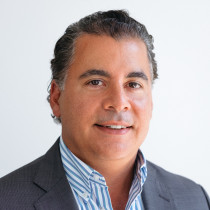 He and his team have delivered strategic counsel to notable domestic and international clients across many regions and industries, including the United Nations, the Global Fund, US Department of State, the Smithsonian Institution, the United Arab Emirates, Kingdom of Bahrain, Orascom Construction Industries, Hines, Medici Land Governance, USAID, Sweetgreen, Alphabet and many others.

During Robert’s tenure at REQ, the company has won numerous awards for growth, culture, and creative work. Most recently, REQ was named Top B2B Digital Marketing and Brand Management Company by Clutch and was named to the Adweek 100 for Fastest Growing Companies.

Robert has worked and lived in all corners of the world. Prior to joining REQ, Robert was the President and Co-Founder of Unison Agency, a brand strategy and digital marketing agency, acquired by REQ in 2015. He’s also worked at Accenture in digital strategy and First Abu Dhabi Bank’s U.S. subsidiary in corporate finance in Washington D.C.

In addition to MEI, Robert serves on the boards of the Many Hats Institute, Conrad Foundation and the Banu Foundation.