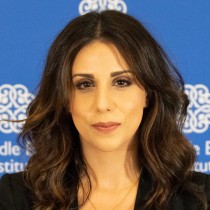 Sama'a Al-Hamdani is a former non-resident fellow at the Middle East Institute focusing on political dynamics in Yemen. She has been published both in Arab and Western media and think tanks, including Al-Monitor, the LawFare blog, Brookings, The National (UAE), MENAsource (Atlantic Council Blog), Al-Araby Al-Jadeed, Fikra Forum, The Middle East Institute Journal, Yemen Observer, and Yemen Times, among others. Al-Hamdani has spoken at many events and forums, including at Brown University, the Carnegie Middle East Center, the World Bank, the United Nations, and Chatham House. She has also made appearances on France24, BBC World Service, CNN, Aljazeera, Al-Araby Television, and C-SPAN, among other outlets.

Before joining MEI, she was a visiting fellow at the Center for Contemporary Arab Studies (CCAS) at Georgetown University and a fellow at the Sana'a Center for Strategic Studies (SCSS). She is also the director of the Yemen Cultural Institute for Heritage and the Arts (YCIHA), a non-profit based in Washington, DC dedicated to Yemeni arts and heritage. Also, from 2011 to 2015 she wrote the blog Yemeniaty.com, with the slogan of "Yemen Simplified," which helped explain political developments in Yemen during the Arab Spring and leading up to the civil war.

Education:
The George Washington University, B.A. with honors in Religion and Peace Studies double major with a minor in Women’s Studies.