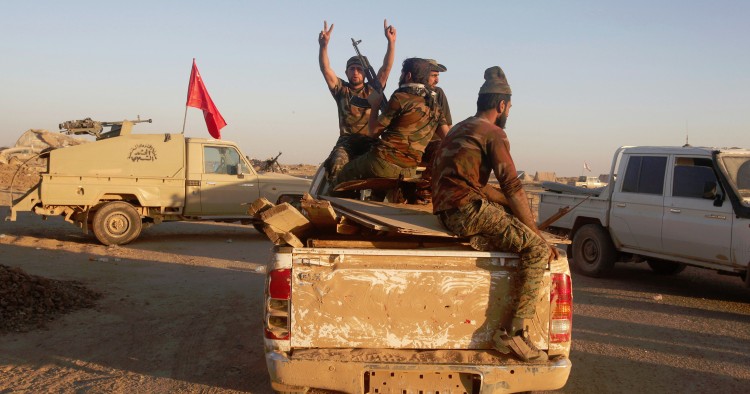 The Iraqi Popular Mobilization Force (P.M.F.) will deploy 20,000 fighters to participate in the upcoming ground operation to liberate the city of Tal Afar from the Islamic State, P.M.F. Spokesman Ahmed al-Assadi revealed today. In an interview with Lebanon’s al-Mayadeen TV channel, Assadi said Haider al-Abadi, the prime minister and commander-in-chief of the Iraqi Armed Forces, will announce the start date for the operation. According to Assadi, it will only take a couple of weeks for the Iraqi security and paramilitary forces to recapture the Islamic State’s last major stronghold in western Mosul.

The spokesman of the paramilitary forces – known as Hashd al-Shaabi – also discussed the latest visit by prominent Iraqi Shiite leader Muqtada al-Sadr to Saudi Arabia. He called on Sadr to provide more information on why he visited Saudi Arabia, and claimed that Riyadh “is entangled in a difficult deadlock, particularly after its defeat in Yemen,” and is therefore reaching out to Iraq to “rescue itself from this psychological siege.”

Comment: The P.M.F.’s potential participation in Tal Afar operation may have serious implications for post-Islamic State stabilization efforts in Iraq. The strategic town of Tal Afar, located about 40 miles west of Mosul, could prove to be a dangerous flashpoint for sectarian violence and proxy wars between regional countries.

The P.M.F.’s increasing role in western Mosul, particularly in Tal Afar, has been a matter of grave concern for Iraqi Sunnis and regional Sunni leaders, who have repeatedly expressed the worry that Iran-backed sectarian groups may engage in revenge killings against Tal Afar’s Sunni inhabitants once the Islamic State is ousted. Turkey, in particular, has warned that it would not remain silent to the P.M.F.’s advances into Tal Afar – although Ankara has recently toned down its criticism of the role of Iran and its proxies in Iraq.