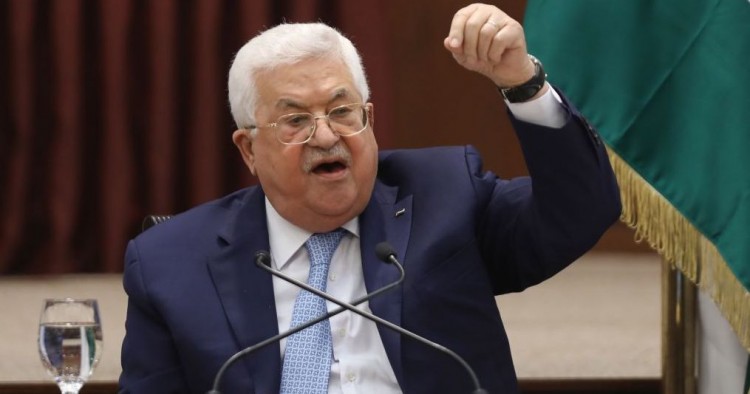 In a dramatic statement delivered yesterday in Ramallah and broadcast on Palestine TV, Palestinian President Mahmoud Abbas declared an end to all agreements signed between the Palestine Liberation Organization (PLO) and both Israel and the United States. In light of the newly sworn in Israeli government’s commitment to the annexation of Palestinian land in the West Bank, declared Abbas, the Palestinian leadership would henceforth be “absolved, as of today, of all the agreements and understandings with the American and Israeli governments and of all the obligations based on these understandings and agreements, including the security ones” — thus implying that the security coordination between the Palestinian Authority (PA) and Israel, which has been a pillar of the Oslo process since its launching in 1993 and which Abbas has previous described as a “sacred” responsibility, would come to an end.

Abbas’s statement went on to add that “the Israeli occupation authority, as of today, has to shoulder all responsibilities and obligations in front of the international community as an occupying power over the territory of the occupied state of Palestine, with all its consequences and repercussions based on international law and international humanitarian law.”

Abbas’s declaration was met, both in Palestine and abroad, with a collective eye roll. Indeed, Abbas has issued numerous similar threats about the cancellation of past agreements since 2015, both in international forums and before domestic Palestinian audiences — the most recent being just nine months ago in July 2019 — but without following through on any of them.

While there are many reasons to be skeptical given Abbas’s record of “crying wolf,” there is good reason to believe this time may be different. If that is the case, the consequences could end up being far greater than either Abbas’s leadership or the Palestinian public had bargained for.

What would it entail?

Precisely what cancelling existing agreements would entail in practical terms, or what it may mean for Israel to shoulder its responsibilities as an occupying power (a responsibility it already bears under international humanitarian law), Abbas leaves to our individual and collective imaginations. The most expansive interpretation of Abbas’s announcement would mean cancelling everything from PA security coordination with Israel to the economic arrangements with Israel, including effectively ending Palestinian imports and exports, and the movement of Palestinians to and from Israel and even within the West Bank. In short, Palestinian social and economic life would come to a halt, while the PA itself would effectively cease to function. If this is what Abbas meant — which seems highly unlikely — his leadership certainly has done nothing to prepare his people for the very dire consequences that such a decision would entail.

Rather, it is more likely that Abbas intends to take a more limited action, for example, by severing security cooperation — and even then, perhaps only in response to formal annexation. Yet even such a relatively limited response could easily expand into something much bigger. Were Abbas to sever security ties with Israel, there is no reason to think Israel would not respond in kind, for example by cancelling arrangements on trade, health, movement, etc. While it is possible both sides might eventually pull back from the brink, it is also possible that such a high stakes game of political “chicken” could inadvertently lead to the PA’s collapse.

Despite the Palestinian leadership’s insistence that Abbas’s announcement is not a bluff and is in fact part of an overall strategy, it has yet to articulate what that strategy is or how it is to be carried out. It is precisely this apparent lack of strategy, exacerbated by the leadership’s weakness and division, that may be pushing Abbas down a road that neither the PA nor the Palestinian public is prepared for.

Abbas may have no choice

Given his own history of minimalism, Abbas will no doubt will seek to delay implementing his decree for as long as possible. But with the prospect of an American-backed Israeli annexation of West Bank land, perhaps as soon as July 1, threatening to shatter his people’s national aspirations, and having already set himself on this path years ago, Abbas may have no choice but to move ahead with his pledge to sever security ties with Israel.

For one, the aging and famously unpopular Abbas is running out of options, and he could find that he has already painted himself into a corner. Indeed, ordinary Palestinians, who had already soured on a U.S.-led peace process well before Donald Trump and for whom the PA’s security cooperation with Israel had become tantamount to collaboration with the occupation, may see to it that he does. Moreover, for the PA to continue its security cooperation in the context of Israeli annexation would imply consent to both the annexation and the highly reviled Trump plan.

The problem, of course, is that once Abbas goes down that road, he does not have the means to control where it ends, including the very real possibility of the PA’s collapse. Thus, even without a formal decision to dissolve the PA, Abbas may have already set himself on a path that makes such an outcome inevitable.

What will the Middle East look like in 2030? An Israeli Perspective