Abkhazia, Georgia and COVID: An opportunity from crisis 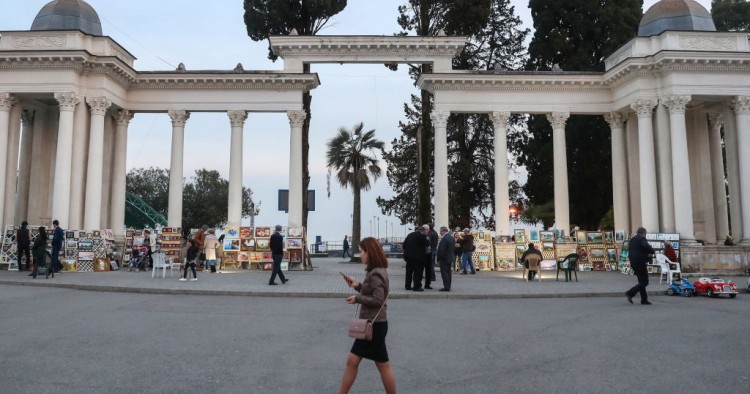 As with nearly everywhere in 2020, the Caucasus has been hit hard by the coronavirus pandemic. While Armenia has registered by far the most cases of the three internationally recognized South Caucasian states, it’s another regional territory where the pandemic’s effects are being felt most broadly: the breakaway Georgian province of Abkhazia. Both the deteriorating public health situation and the pandemic’s economic impact have combined to create a truly dire situation in Abkhazia, perhaps the worst it has experienced this century. It is from this crisis, however, that a rare opportunity for improving engagement between Georgia and Abkhazia has emerged, one that Georgia’s leadership should not let go to waste.

As one would expect, relations between Georgia and secessionist Abkhazia have never been good. Since Abkhazia achieved de facto independence following the bloody 1992-93 war, its status has largely been frozen, with Georgia refusing most engagement on grounds of avoiding tacit recognition of that fact and in protest of Russia's heavy military presence in Abkhazia. While some dialogue has continued between the two sides, primarily in the form of the Geneva International Discussions, it has resulted in extremely little. Abkhazia remains impoverished and highly dependent on Russia, cut off from the world and no closer to returning to the fold.

For Abkhazia, 2020 has been an exceedingly difficult year. The economic situation has been described as ‘catastrophic,’ with the two pillars holding up Abkhazia’s shaky economy both collapsing. The first, Russian subsidies, which form roughly half of the state budget, had already been dropping for years. According to figures calculated by the International Crisis Group, Abkhazia was slated to receive around $140 million in Russian financial aid in 2020, down from nearly $300 million in 2012. But these payments have been severely delayed. As Abkhaz President Aslan Bzhania stated during a government meeting on June 2, Abkhazia had not to that point received *any* of the Russian funding allocated for 2020. This has contributed to a massive budgetary crisis in the territory, with state employees forced to go without salaries for months. At present, there is still no indication that any of the transfer payments have been received.

The second factor is one with which Georgians can sympathize: the pandemic’s decimation of the tourist season. Tourism, overwhelmingly from Russia, the basis of Abkhazia's economy that accounts for as much as one-third of GDP, has been devastated by the pandemic. In an effort to relieve part of the economic suffering, Abkhaz authorities reopened the border to Russian tourists on August 1. The price has been heavy, however: Abkhazia is now suffering from a massive COVID outbreak that has already overwhelmed the territory's meagre health system. Roughly 60 new cases are being reported daily, the highest figures since the pandemic’s start, and also likely a significant undercount given insufficient testing capabilities. This is especially concerning given that 80 percent of Abkhazia’s medical personnel is age 60 or over. As one foreign diplomat who regularly visits Abkhazia put it, “if they get sick, the region will lose all its doctors within days.”

The economic influx, meanwhile, has been nowhere near sufficient to make up for the lost months. Although August and September saw a reasonable flow of tourists, the gulf to overcome from losing more than half the season was simply too great. By the end of July, Gagra province, bordering Russia, perhaps the most important tourist region of the country, was more than 80 percent short of its projected revenue by that point. ‘Catastrophic’ begins to look like too light a descriptor of the economic damage on Abkhazia.

Crisis always brings opportunity, however, and the present moment presents one for the long-moribund negotiations between Tbilisi and Sukhumi. Abkhazia's society and elites both recognize that the statelet needs change. President Bzhania ran on an explicitly pro-dialogue platform in March's national election, and his appointment of longtime diplomats like Sergey Shamba with good standing in Tbilisi underscores the new Abkhaz leadership's seriousness on the issue. Despite initial appearances, Abkhazia’s close relationship with Russia is by and large born out of necessity, as Russia represents nearly its sole outlet to the world writ large. Abkhazia is explicitly opposed to greater integration with Russia, unlike Georgia’s other breakaway region, South Ossetia, whose leadership openly desiresaccession into the Russian Federation as a constituent republic. Abkhaz society, furthermore, is exhausted by a persistent socioeconomic crisis that the territory's current path offers little way out of. A whole generation has now grown up that is too young to remember the war. All they know is that the present situation is untenable, and they want a change.

One of the few enduring positives in Georgian-Abkhaz relations is particularly relevant to the current crisis: medical aid. Georgia has long made medical aid part of its outreach package to Abkhaz society. The inhabitants of Abkhazia are entitled to free medical care in Georgia proper, and the Georgian government has even built facilities for this express purpose, such as the large new hospital in Rukhi, near the de facto border. Georgia has already provided some medical aid to Abkhazia during the half-year of pandemic, opening the Rukhi hospital in March (with Prime Minister Giorgi Gakharia expressly stating that “everybody who will cross the occupation line...will receive assistance”), and at least a few dozen people have come for COVID-19 treatments. A few other small instances of cooperation have occurred, such as a UNDP-facilitated online consultation between doctors in Georgia’s Kutaisi and their Abkhaz colleagues.

While this is a solid foundation, it has all been performed to rather hushed tones. Since the opening of the Rukhi hospital, already long-planned, there have been very few public messages exchanged between the two sides, and little evidence that most of Abkhazia’s (or Georgia’s) population is aware of the cooperation. A stronger signal is needed.

Georgia presently has a rare opportunity to kickstart the entire stalled negotiation process with Abkhazia. To do this, it should offer to send an aid package to Abkhazia to help mitigate the pandemic and its effects. The content of the aid itself is not necessarily most important, although it could take several forms. In June, the Georgian government sent COVID aid to neighboring Armenia, providing Yerevan with 27 ventilators at the peak of their outbreak. A similar offering – likely a smaller one given Abkhazia’s much smaller population – would go a long way towards building trust between the two sides. Perhaps some form of economic aid could be discussed as well. While Georgia’s economy is itself suffering heavily from the pandemic, even a small contribution would help blunt the effects of the economic disaster on ordinary Abkhaz. Most importantly, this offer of aid should be made very publicly, delivered to the Abkhaz government in open form in order to justify the politically risky pro-engagement position of President Bzhania, and to demonstrate to Abkhaz society that Georgia is not an enemy, but a benevolent actor ready to engage in good faith.

The idea of negotiations with separatist Abkhazia’s leadership have long been a political death wish for political parties in Georgia, offering ample ammunition for their opponents to attack them as ‘betraying’ the quarter-million IDPs from Abkhazia while promising little in terms of domestic political standing. On the issue of COVID, however, Georgian society is unexpectedly united. Polling conducted by the Caucasus Research Resource Center in May showed that a massive 90 percent of Georgians would support sending medical aid to Abkhazia and South Ossetia to help cope with the pandemic. Other recent research demonstrates that Georgian citizens have slowly become more willing to negotiate with the breakaway regions than a few years ago. This is precisely why the coming months are so crucial. Should the incumbent Georgian Dream win a comfortable victory in next month’s national election, something that looks likely given recent opinion polls and widespread public approval of their handling of the pandemic (although threatened by a recent surge in cases), they will have the political mandate necessary to enact such a move.

This moment won’t last forever, though. President Bzhania and his cabinet are betting on a renewed push for engagement with Georgia in a bid to change the dismal status quo in Abkhazia, a move that is not without controversy and has already generated significant domestic pushback from some sectors. Georgia’s main political parties have shown little interest in Sukhumi’s outreach thus far; if months continue to pass without progress, it will only grow easier for Bzhania’s domestic opponents to use his evidently hapless willingness for reconciliation against him. The last two years have seen how estranged the two sides can become, with repeated long-term closures of the de facto border causing some astute observers to warn of the dangers of Abkhazia’s ‘Ossetianization’; that is, the near-total international isolation of the territory, and the inherent overwhelming Russian domination that would follow.

An offer to aid Abkhazia could produce an outsized impact in impressions of Tbilisi's intentions, among the new Abkhaz government and Abkhaz society writ large. The last two decades have not brought Abkhazia any closer to reintegrating into its parent state, and the status quo benefits no one. A targeted aid outreach now would go a long way towards establishing goodwill among Abkhaz’s political elite and Abkhaz society towards Georgia and would provide a strong basis for truly initiating reconciliation between the two.

Neil Hauer is an independent analyst focused on Syria, Russia, and the Caucasus. Follow him on Twitter at @NeilPHauer. The views expressed in this piece are his own.

Photo by by Valery Sharifulin\TASS via Getty Images