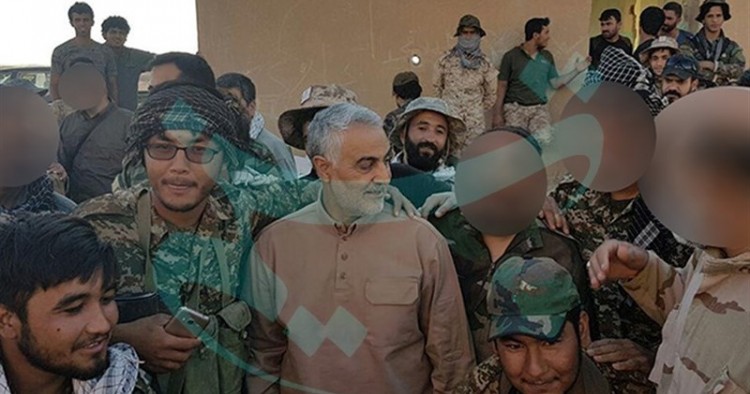 Mohammad Mohaqeq, a deputy chief executive of Afghanistan, has come under fire at home after he praised the role of Iran and its regional proxies in the Syrian conflict. Speaking at a conference in Tehran last week, Mohaqeq congratulated Qassem Soleimani, the commander of Iran’s elite Quds Force, and Hassan Nasrallah, the leader of the Lebanese Hezbollah, for the “victory” against ISIS. But what particularly triggered angry reactions in Afghanistan was Mohaqeq’s praise for Afghan Shiite militias, known as the Fatemiyoun Division, who are fighting in Syria under Soleimani’s leadership. The Kabul government distanced itself from Mohaqeq’s remarks, whereas many politicians and media outlets said his support for Iran and the sectarian conflict in Syria is dangerous for Afghanistan’s stability and sectarian harmony.

Last week, the Iranian government organized an event in Tehran to celebrate the “victory” of Iran and its allies against ISIS as well as against the United States and its allies in the region. According to the Iranian media, more than 500 Muslim leaders and scholars from 94 countries took part in the event, dubbed as the International Conference on Followers of Ahl al-Bayt (family of Prophet Muhammad) versus Takfiri [Sunni extremist] Issue. Several senior Iranian officials also participated.

Mohaqeq, who is also a prominent Shiite politician from Afghanistan’s Hazara ethnic minority, was among notable speakers at the event. “I consider it necessary to deeply thank all combatants that participated in these battles, whether they were fighters from Iraq and Syria, the Iraqi and Syrian armies, Hashd al-Shaabi of Iraq, or fighters from Iran, Afghanistan, Pakistan and other parts of the world. Indeed, these battles were the battle of Islam against the infidel and plots by the Global Arrogance. And our dear brother Qassem Soleimani, the powerful general of Islam, and also the honorable Sayyed Hassan Nasrallah played a prominent role. I congratulate them and wish them more success,” Mohaqeq told the audience.

Iranian leaders often use the term “Global Arrogance” to describe the United States, but Mohaqeq said in an interview in Kabul this week that he was referring to Israel, not America.

Mohaqeq’s speech predictably triggered a great deal of concern and criticism in Kabul.

A statement by the President Palace said Mohaqeq’s remarks ran “counter to Afghanistan’s laws and the country’s foreign policy principles, national interest, peace and stability.” It added that the government is probing the case. “The government emphasizes that Afghanistan has never participated in proxy wars and will not allow that this country turn into a proxy battlefield in the future.”

Chief Executive Abdullah Abdullah echoed a similar view and stressed that the Afghan government opposes the participation of Afghans in any foreign wars. Several members of parliament, including Abdul Rauf Ibrahimi, the speaker of the Afghan Parliament’s lower house, also reacted angrily. Aryan Youn, a lawmaker, accused Mohaqeq of “spying” for Iran and said his comments jeopardize Afghanistan’s national security.

Facing a fierce backlash, Mohaqeq said he stood by his remarks but claimed that he only expressed his personal views rather than the policy of the government. He added that he congratulated Iran and others for the defeat of ISIS, labelling his critics as pro-ISIS and anti-Shiite.

But his explanation failed to calm the situation.

An article in Hasht-e Sobh, Afghanistan’s largest daily, wrote that Mohaqeq made a “major political mistake under the influence of sectarianism and Iranianism” and made the Afghan Shiite community vulnerable to threats at home and abroad. “Despite experience in politics, he unbelievably and irresponsibly entered a bloody battle that will inflict tremendous costs on his people.” The paper pointed out that Mohaqeq could have praised the defeat of ISIS without resorting to flattery to the I.R.G.C. and Hezbollah. “Naturally, we are deeply happy about the defeat of ISIS, but at the same time, it is worth noting that while the Iranian government fights ISIS in Iraq and Syria, it exploits the Taliban against the U.S. presence in Afghanistan… Indeed, the government of Iran has hosted Golbuddin Hekmatyar [former Afghan jihadi leader] and al Qaeda members fleeing Afghanistan [after 2001], including the family of Osama bin Laden.”

Another article called on Mohaqeq to apologize, and said he may have appeased his “colleagues” in Tehran but has aroused the resentment of many at home.

Over the past six years, Iran’s Islamic Revolution Guards Corps (I.R.G.C.) has recruited, indoctrinated, trained and deployed thousands of Afghan Shiites to fight under its command against Sunni rebel groups across Syria. The Fatemiyoun Division has about 20,000 active fighters, according to accounts provided by Iranian officials.

Interviews with Fatemiyoun militants with the Afghan media demonstrate that the I.R.G.C. recruits destitute and undocumented Afghan refugees by offering them permanent residency, financial aid, and other incentives for their families. Others say they joined Iran’s war in Syria to escape prison sentences. Of some 2.5 million Afghans living in Iran, a third are registered as refugees while the remainder are mostly illegal economic migrants. Some Afghan Shiites also fight in Syria for ideological, religious and political reasons.

Backlash in Afghanistan and Pakistan

The increasing role of Afghan Shiites in defending the Assad regime comes at a time when some of their fellow Sunni countrymen are fighting on the opposing side in Syria – sparking fears that they will fuel sectarian tension in Afghanistan once they return. “It is likely that Sunni and Shiite Afghans fighting in Syria and Yemen return someday and their sectarian grudges get them to fight each other at home,” one article in Hasht-e Sobh warned.

The consequences are already felt in Afghanistan and Pakistan. The Islamic State and Punjabi sectarian groups such as Lashkar-e Jhangvi have claimed credit for terrorist attacks against the Shiite communities in both countries and blamed Shiites’ participation in the Syrian conflict. Moreover, the recruitment and indoctrination of thousands of Afghan and Pakistani Shiites allow Iran, once the Syrian war is over, to further its influence and sectarian agenda in Afghanistan, and to a lesser extent in Pakistan, at the expense of South Asian stability and the interests of the United States and its allies in the region.