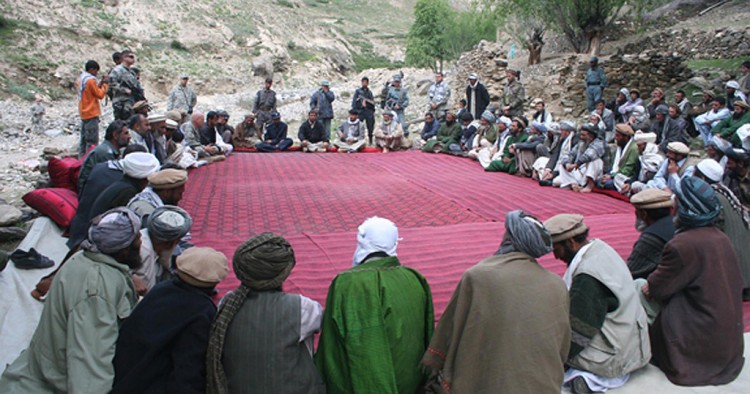 Recent media coverage of the Afghan war questions whether we’ve made meaningful progress towards security and an effective Government in that country. Or were the past ten years a lost decade for the Afghans and Coalition partners? This ten-year milestone is a good point in time to pause, check Afghanistan’s progress, and assess where it appears to be headed. With the assistance of over 40 nations, Afghanistan developed its infrastructure and has taken major steps towards self sufficiency. Strategic decisions to rebuild the Afghan National Security Forces and educational system laid the foundation for today’s improvements of the economy. One fact cannot be disputed: in the history of the modern world, no third world country has received as much outpouring of support and aid as has Afghanistan since 2001.

Prior to 2001, while the country was in the midst of civil war, many businesses were destroyed or closed down and capital fled the Afghan economy. This lack of safety for businesses and their people led to a drastic contraction of the economy. Therefore, securing the country and building the internal infrastructure was vital for economic redevelopment.

Afghanistan is now much safer and open to business due to the capabilities of the Afghan National Security Forces. However, in order to better understand the progress of the local security forces, we must compare the past ten years with the era from when the Soviets withdrew their forces in 1989 to the liberation of the country in 2001. In this period, the Afghan security structure had deteriorated and was inept. Not only were the Afghan National Security Forces barred from making defense acquisitions, they also failed to take meaningful steps towards maintaining what little was left of their equipment and personnel as a result of the ongoing civil war.

With guidance from the Unites States and Coalition partners, Afghanistan’s National Security Forces have now accumulated a decade of training and mentoring. At this very moment, Afghan Security Forces are being educated locally and some groups are sent abroad for more advanced training in India, Turkey, the United Arab Emirates, Europe, and the United States. This training comes from some of the world’s best forces which also provided aid in major defense related acquisitions to build up their capabilities. As a result of this robust development, the number of Security Forces, to include the Afghan National Army (ANA) and National Police (ANP), have increased from several thousand disenfranchised individuals in 2001 to well over 300,000 professional soldiers and police today according to NATO’s International Security Assistance Force. In addition, women have been integrated into these forces at all levels and are now training other women. Suffice to say that the capacity and capability of the Afghan Security Forces has dramatically improved from a decade ago. According to the U.S. State Department, 75% of the Afghan population’s security is in the hands of the ANA and ANP today, with plans of securing their country in entirety by 2014.

Better security paved the way for vast improvements and transformation of the educational system in Afghanistan. In 2002, the CIA estimated about 800,000 Afghan students enrolled in primary education, the vast majority of whom were boys. Today, there are over 8.2 million students enrolled in school, of whom almost 40% are girls. In fact, there are more public and private K-12 schools, colleges, and trade schools in that country today than ever before. Private schools including higher education at the international level, such as American University in Kabul, have also emerged and are at full capacity. For a country with a population of roughly 30 million, improvement in education is timely, given that 46% of the population is under the age of 14 years according to the United Nations. This high level of enrollment in school over the past decade has led to a more skilled labor force with less dependence on agriculture, and lower unemployment rates and higher levels of productivity compared to the Taliban era. Within the next few years, even more students will utilize the educational system to improve their family’s livelihood. Improvements in the educational system, in turn, enabled Afghanistan’s private sector to flourish by supplying qualified skilled labor into the work force.

At the outset, the Afghan economy needed an early “kick start” in the form of capital infusion. This aid came from internationally financed public works projects and Coalition Forces outsourcing part of their logistics and construction to the locals. This aid not only provided jobs for the locals, but also capital for reinvestment back into the economy. Public works projects included reconstruction of bridges, highways, local roads, and irrigation systems as well as redevelopment of government institutions and capacity building of its work force. Capacity building of locals is beginning to show positive results with less dependence on international mentors. Today, an ever-increasing number of locals are taking leadership roles in both the private and public sectors. In addition, the work force is more balanced, with reintegration of women into government institutions to include security forces, hospitals, schools, as well as private industries. The revitalization of the central bank and new Afghan currency paved the way for local and international banks to begin operations in country. These banks, in turn, have provided locals with much-needed loans to fund their ventures. As a result, today we’re seeing increasing levels of commerce and trade domestically and abroad. The World Bank estimates Afghan GDP growth from under $2.5bn in 2001 to well over $17bn by the end of 2011.

Increased levels of security and commerce attracted additional investments into the growing economy. Case in point, the revitalization of media, which was entirely banned during the Taliban era, is now on par with surrounding nations. Afghan telecommunications and media now includes six mobile phone carriers, 75 television channels, over 175 radio stations, and hundreds of print publications. Collectively, these sources of communication enable local Afghans to build their identity and brand name. The investment into this industry is tremendous and would not have come about without better security and an educational system to provide a capable workforce to operate these media outlets.

In 2002, market segments in every industry were open to new entrants for those investors that had the appetite for risk. Over the past decade, international donors and mentors organized countless trade shows around the country and abroad to showcase Afghan goods ranging from textiles to agricultural products. Those highly skilled, educated, and wealthy investors that returned to Afghanistan and took on the additional risk in post-war country are now enjoying the fruits of their labor. These “first to market” businesses established their brand names early on and now control their market segments. In addition, Afghanistan has also begun mining activities with multi-billion dollar contracts in copper, iron, and natural gas with more to come in the near future. These economic developments allow for higher levels of commerce, trade and overall increased tax base for the Central Government. Over time, the increased tax base will, in turn, enable further government spending on infrastructure and higher levels of benefits for the general public, such as health care and pensions for the elderly.

Afghanistan has laid the foundation for a more prosperous nation going forward, with better security and private sector development leading the way. Based on my own previous work in Afghanistan as Advisor to the Ministry of Finance and more recently, as host of a weekly US-based Afghan TV show, it is clear to me that Afghanistan’s private sector has made great strides and is well on its way toward an economic convergence with its neighboring nations. This convergence is mostly as a result of numerous public works projects, a revamped educational system and most importantly, improvements in their security forces. The Afghan Government will need to capitalize on these early successes and work towards self-sufficiency, specifically in the areas of security and further development of its economy. Continued improvements in these areas will draw additional foreign direct investments into their economy resulting in more jobs and higher levels of output. By looking beyond the daily news headlines, it is clear that Afghanistan is making a comeback; all they needed was some support along the way.

Stuck in the middle: Afghanistan between the superpowers