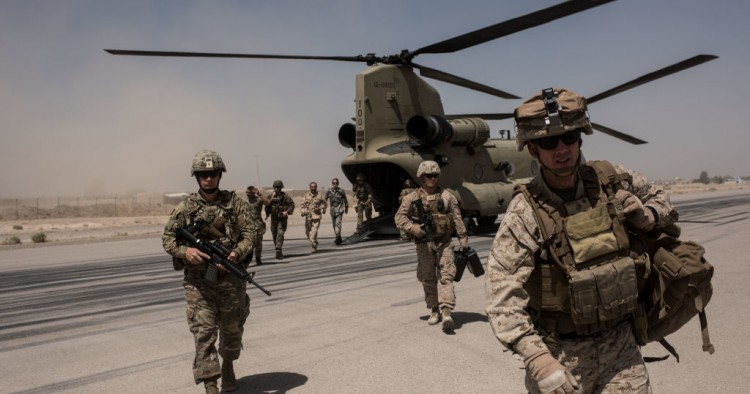 President Donald Trump’s recent order to withdraw roughly half of the 14,000 U.S. forces stationed in Afghanistan revived the debate between proponents of remaining and advocates of retrenchment. However, neither side pays attention to the side effects of the remedies it prescribes. Whether we stay in or pull out from Afghanistan, America faces the likelihood of significant and enduring costs.

The U.S. is not winning the war and has not accomplished two of its central goals: Afghanistan remains a safe haven for terrorists and it has, at best, a frail state governing in Kabul.

If we remain, the U.S. will be saddled with the costs of (1) continuing to fight militant groups ranging from the Taliban and Al Qaeda to ISIS-Khorasan Province (ISIS-KP), and (2) continuing to build an Afghan state. If we leave, we face the potential threat posed by the nexus between a weak Afghan state and terrorism, as well as a power vacuum in Central Asia, another civil war in Afghanistan, and a major refugee crisis.

American contends with what is known as the Lippmann Gap, where we have not reconciled our commitments with our relative power. Although we currently spend upwards of $45 billion per year in Afghanistan (and have spent more on reconstruction in Afghanistan and Iraq than we did on the Marshall Plan), we have failed to accomplish several of our key aims, starting with eliminating it as a safe haven for terrorists. Over 20 militant groups operate in the country, including al-Qaeda, ISIS-KP, and the Taliban.

Another major goal that the U.S. has failed to achieve, and one of the highest costs of remaining, is building a viable Afghan state that has a monopoly over the legitimate use of violence. After 9/11, many scholars and pundits argued that the reason for the attacks was because Afghanistan was a prototypical failed state, and it was necessary for the U.S. and its allies to build a new one to prevent future attacks. This has still not happened, and the U.S. cannot claim to have erected a viable, Weberian state in Afghanistan.

According to David A. Lake, “statebuilding is a costly undertaking that, to succeed, should be of indefinite duration.” Using examples from America’s costly interventions in Iraq and Somalia, Lake argues that occupying powers fail to engage in successful state-building because they lack the legitimacy necessary to build a state, and often want a loyal patron to take office whose interests frequently differ from those of the average citizen. The U.S. could, theoretically, choose to escalate the conflict in Afghanistan. This would involve not only increasing the number of troops but also the level of aid as well. It would entail opportunity costs for the U.S in arenas where it is competing for influence with potential great powers such as China. For opponents of remaining or escalating in Afghanistan, withdrawal is the default option. Americans must be prepared to forego the costs in blood and treasure that have been sunk in this conflict over the past 17 years.

Studies such as Paul MacDonald and Joseph Parent’s well-received book on retrenchment show that for states in relative decline, pulling out of peripheral regions and costly international commitments can allow great powers to bounce back. However, when it comes to pulling out of Afghanistan, several potential risks remain. These include the continued threat of terrorism, a power vacuum in Central Asia, another Afghan civil war, and a potential refugee crisis.

A weak Afghan state would remain a problem for U.S. national security. Another 9/11 could be planned in and executed from post-withdrawal Afghanistan. Even if American intelligence “connected the dots,” coercive diplomacy would be unlikely to be effective because it is doubtful a strong regime would emerge in the wake of America’s full withdrawal.

During its last stint in power from 1996-2001, the Taliban did not manage to establish control across the entire country. It would likely take several years before any regime (whether it is led by the Taliban, al-Qaeda, ISIS-KP, an amalgamation of the three, or some entirely new entity) is able to fully consolidate authority throughout Afghanistan.

Since 9/11, the U.S. has attempted to coerce (mostly weaker) states to rein in terrorists operating from within their borders. Intuition tells us that it should be easy to compel Afghanistan in the future, given their power asymmetry. However, history suggests that weak regimes can be harder to coerce than strong ones. This is because even if a weak regime is disposed toward complying with a greater power’s demands, it lacks the institutional strength to carry them out. Israel faced a similar problem with fedayeen raids from Egypt prior to Gamal Abdel Nasser’s emergence and subsequent consolidation of power, as well as Syria before the Corrective Revolution of 1970.

In addition to the dangers outlined above, a full withdrawal could exacerbate the ongoing competition between China, India, Iran, Pakistan, and Uzbekistan for influence, mineral wealth, and water resources in Afghanistan. Another dangerous possibility is the outbreak of an ethnic war. A complete withdrawal could exacerbate the security dilemma among rival ethnic groups, much like the 2011 withdrawal from Iraq reignited the competition between the Sunnis and Shi’a. Such a conflict could, in turn, lead to a refugee crisis on a par with Syria’s.

America is losing the war in Afghanistan. Neither remaining nor retrenching is a magic solution that can produce a “win” after 17 years of defeats. Both paths are sowed with costs and threats. But it will need to make a choice.

In the interest of full disclosure, I lived and worked in Kabul, Afghanistan as an Assistant Professor of Political Science at the American University of Afghanistan (AUAF), a project that is largely funded by USAID. The views expressed here are partly colored by my experiences in Afghanistan, but do not represent those of my former employer.