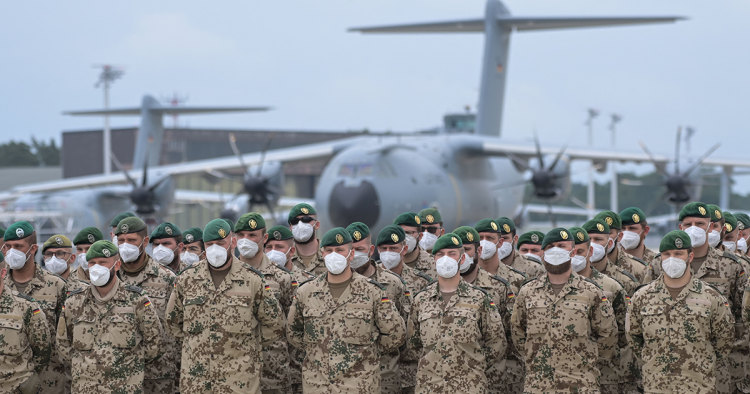 "This marks the end of a historic chapter — an intense deployment that has challenged and shaped us," wrote German Defense Minister Annegret Kramp-Karrenbauer on June 29. The occasion was the homecoming of the last German troops deployed in Afghanistan. Over the past 20 years, around 150,000 German troops served in these troubled lands, making Germany the second-largest contributor to the international missions in Afghanistan. In total 59 German soldiers died, which is more than in any other German postwar deployment. Together with so many other international troops, they were there to fight terrorism, to help “build” a nation, and to train, advise, and assist the Afghan National Defense and Security Forces and the relevant institutions. Billions have been spent. As with most other contributing nations, the recent withdrawal has felt rushed, its timing questionable. Equipment of significant value could still be taken home, but a lot had to be sold last minute, gifted, abandoned, or burned — all while the Taliban was quickly gaining influence and territory.

The withdrawal indeed marks the end of a historic chapter. It involves more than just the conclusion of a drawn-out international military engagement in Afghanistan. Rather, it signals the end of a decades-long phase in which Western militaries placed the broader Middle East and the fight against international terrorism at the center of their strategic attention. With competition between the great powers on the rise, Western militaries have realized their current vulnerabilities vis-à-vis near-peer competitors and the need to shift gears. The strategic focus is rapidly changing and as the West is propping up its defense and deterrence postures, there will be little appetite for any larger-scale deployments in the broader Middle East and West Asia region.

The 20 long years in Afghanistan embody the transformation Western militaries embarked upon after the end of the Cold War. After the implosion of the Soviet Union, the emerging strategic gap was filled with crisis response and out-of-area activities aimed at exporting stability and prosperity to other parts of the world. The belief that the most significant threats to the Western way of life had their roots in the Middle East and North Africa, rather than in Russia, was solidified by the Gulf Wars, the 9/11 terrorist attacks, and later on the rise of the so-called Islamic State. The NATO strategic concepts of 1991 and 1999 codified this change and the adaptation to the new threat environment accelerated following 9/11. NATO was granted a more political role and while deterring Russian aggression on paper remained the primary objective, in practice intellectual and material resources were increasingly directed at fighting (Islamic-inspired) terrorism.

The transformation process impacted everything from doctrine and concepts to equipment and training. NATO became less of a collective defense organization limited to the Euro-Atlantic area as it concluded new partnerships in the Mediterranean and the Middle East and pursued dialogue with Russia. Many of the European armed forces eagerly followed this new strategic direction and reshaped their forces to be more mobile, lighter, and capable of adjusting to the circumstances of the Middle East — partly by simply cutting out the rest. Over the past decades, often prompted by an American lead, they engaged in combat missions, training and capacity-building activities, maritime surveillance operations, and the global coalition against the so-called Islamic State. By doing so, the European allies showed a certain willingness to contribute forces to these U.S.-led Middle East missions and shared some of the burden. While at the same time, European politicians used the apparent disappearance of the more tangible threat from Russia as a justification for significant budget cuts.

The rise of new strategic threats

In the past 30 years, a collective focus on crisis response, fighting terrorism, and the broader Middle East have held the transatlantic allies together, albeit at times reluctantly due to diverging views on how to tackle the situations in Afghanistan, Iraq, or Libya. While unity is being challenged in these places, it is growing again around other possible threats. The Western allies confronted Russian aggression in Georgia, Crimea, and eastern Ukraine, as well as damaging cyberattacks and other hostile and condemnable acts instigated by the Kremlin. Russia has developed its own asymmetric form of “hybrid warfare,” in which non-military means, ranging from economic blackmail to disinformation, play a much larger role. NATO does not yet have a good answer to hybrid warfare, but it was able to quickly forge a consensus around the need for an Enhanced Forward Presence in the Baltic states and Poland.

Many allies are also starting to see and treat China as a systemic rival with a global agenda that might turn out to be a lot more strategic than initially envisioned. For quite some time, a rising China has been embraced as an economic opportunity, but the mood has changed and allies are scrambling to understand and respond to any associated risks. As can be deducted from the latest NATO summit communique from mid-June 2021, they are eagerly rebalancing efforts toward defense and deterrence against (near) peers: Russia, but also increasingly China. Given these potentially more impactful strategic threats, it is hard to sustain an emphasis on fighting terrorism by transforming the broader Middle East. This is especially true at a time when the number of staunch believers in the “democratization” of the Middle East has dwindled.

The appetite for large-scale deployments in the Middle East region has also been frustrated by the limited progress on stated objectives. There has been a growing acknowledgement that, with hindsight, ambitions were too high. Assumptions on the ability and desirability of change might have been flawed. Allies have diverging views on how to best tackle terrorism threats. In Afghanistan, 20 years later, only small successes can be pointed out: More children are receiving an education, the position of women has improved, and Afghans enjoy a higher life expectancy. Indubitably, these are important gains. However, they are rather localized. Plus, against the backdrop of the overstretched and exhausted militaries that returned home, it is hard (but not impossible) to uphold the claim that it was truly “worth it.”

This current, hasty withdrawal is certainly not helpful, as it might do further damage to the necessary consensus and indispensable trust among allies, international but also inside Afghanistan. As Dutch caretaker Minister of Defense Ank Bijleveld-Schouten put it, this last episode of the international engagement in Afghanistan has caused “mixed feelings” as well as great uncertainty with regard to the future of the Afghan people. Small successes do exist, but the situation can easily be reversed and the Taliban’s rapid recent gains might wipe them out in no time.

This decades-long experience of fighting terrorism in the broader Middle East has shaped Western militaries and the lives of many individuals. Knowing what we know now, it is unlikely that Western allies would sign up again to a large-scale engagement in the region. The missions will remain alive in the stories being told among the troops. But in capitals and in the political arena, the focus on missions in the Middle East will fade. So even though terrorism might remain the most imminent threat to Western societies for a while, their militaries will have to shift their attention and ambitions. They will have to shape up and innovate to level with Russia, and possibly China. Of course, given the proximity to Europe, the Middle East will still get plenty of crumbs of the pie, and countries such as Italy, France, and Greece will always consider their southern region as key to (inter)national security. So while there will be small-scale deployments, training missions, and maritime security activities, another large-scale international effort like the one in Afghanistan is hard to imagine. Whether that is a blessing or curse, however, remains to be seen.