After ISIS, Iran's Afghan Proxy in Syria May Fight in Other Regional Conflicts 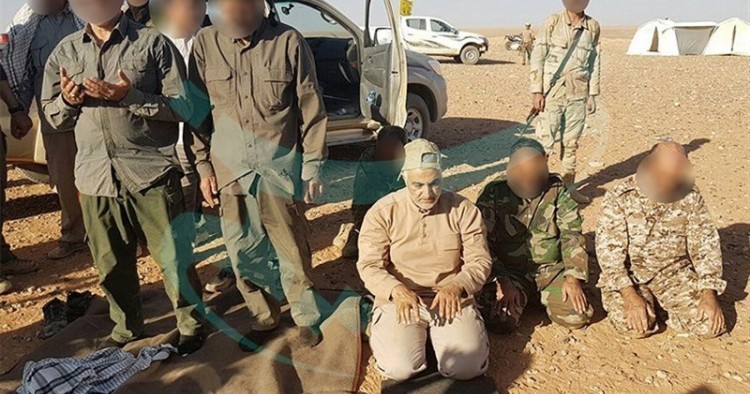 A commander of the Fatemiyoun Division, an Iranian-led Afghan Shiite militia group fighting in Syria, has said that the mission of his forces is not confined in Syria, and that the militiamen will be willing to fight in other regional conflicts and around the world if instructed by Supreme Leader Ali Khamenei. In an interview with Defa Press, an outlet affiliated with the General Staff of the Iranian Armed Forces, the militia commander called on all world Shiites to unite under Khamenei’s leadership to strengthen the Islamic Republic and its influence in the region. Quoting the founder of Iran’s 1979 Islamic Revolution, Grand Ayatollah Ruhollah Khomeini, the Afghan commander said, “Our war is an ideological war and does not recognize geography and border.” He continued: “Anywhere oppressed people need help, we will be present there and assist them.” He added Abu Hamed, a founding commander of Fatemiyoun later killed in Syria, had instructed them to go to help Muslims even in “the heart of America.”

The commander also recalled Ali-Reza Tavasol, who founded Fatemiyoun and was later killed in Syria, as instructing the militias to go to “help Muslims” anywhere in the world, including in “the heart of America.” He praised Iran’s Velayat-e Faqih system of government and claimed it has helped Iran to spread its power globally.

The Afghan commander also made no secret of the fact that he and his followers emulate Khamenei as their religious and political leader. “We saw on the battlefield that some combatants saying this before beginning an attack: ‘If we do not return, pass on our greetings to His Excellency (Khamenei) and tell him that… it is your order that has energized our hearts and actions to fight in this battlefield. We sacrifice our lives for you.’”

Comment: Under the leadership of Iranian Quds Force Commander Qassem Soleimani, Afghan  Shiite militias have played an instrumental role in turning the tide of war in Syria in favor of the embattled Assad regime. Known as the Fatemiyoun Division, the Afghan fighters have participated in major battles across Syria and recently played a prominent role in the seizure of the border town of Abu Kamal.

But with ISIS collapsing in Syria and Iraq, Tehran does not appear to be demobilize the Fatemiyoun and will instead use 20,000-strong militia force to fight Iran’s asymmetrical wars in other regional wars. Earlier this year, the deputy commander of the Quds Force, Ismail Ghaani, said Fatemiyoun fighters “do not recognize borders to defend Islamic values” and to “foil the plot of the Global Arrogance [U.S.] and bloodthirsty Zionism [Israel].” He also stressed that Fatemiyoun’s mission is not confined to Syria. Afghan officials allege that Iran has dispatched a number of Fatemiyoun to fight in Yemen and express the worry that the I.R.G.C. may also use Afghan Shiite fighters for proxy wars in Afghanistan once the Syrian conflict is over.

Yemen and Israel may be the next targets. When Iran declared victory over ISIS last month, the Fatemiyoun issued a statement contratulating Khamenei and Soleimani on the fall ISIS emphasized that they will continue to fight alongside the “axis of resistance” to annihilate Israel. “Thanks to the leadership of the Leader of the Islamic World [Khamenei] and your [Soleimani’s] supreme command and prudence, a group of men have now emerged from Afghanistan and joined the axis of resistance. With their respected commander, they have sworn that they will not sit down until the elimination of the international Zionism.”

Similar to Iran’s Iraqi proxies, Fatemiyoun leaders have also been making threats against the United States. “We believe that although the existence of murderous Daesh [ISIS] in Iraq and Syria has come to an end, but Daesh’s masters in Tel Aviv and Washington will not remain idle and will continue to inflame violence, hatred and tragedy in the broader Islamic community, among both Shiites and Sunnis,” the Fatemimyoun statement said last month. “Here, we declare that after completely cleansing the Syrian territory from Takfiri terrorists and establishing full security Hazrat Zainab shrine and Sayyidah Ruqayya Mosque, we are ready to help the oppressed anywhere in the world under the leadership of beloved Imam Khamenei.”

The Fatemiyoun was founded by leaders of two Afghan Shiite militant groups: Sepah-e Muhammad (Muhammad Army), an Iran-backed group that operated against the Taliban in Afghanistan in the 1990s, and the Abuzar Brigade, which fought alongside Iranian military forces against Iraq in the 1980s. According to Iranian military sources, more than 2,000 Afghans perished during the Iran-Iraq war in the 1980s. The founder of Fatemiyoun, Alireza Tavasoli, was a veteran of the Iran-Iraq war and was a close confidante of Soleimani; when Tavasoli was killed in Syria, Soleimani visited his family to pay tribute.