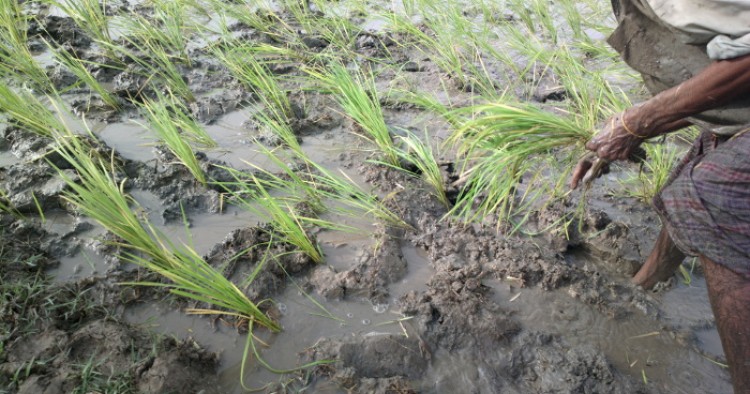 Since its independence in 1947, Pakistan’s economic relationship with the Arab Gulf states has been characterized by a series of often opaque arrangements. For years, there had been intense speculation concerning the nature and extent of Saudi Arabian investments in Pakistan. Rumors of the Saudi government providing financial assistance to Pakistan’s nuclear program were common.[1] Massive investments in areas like Pakistan’s energy sector were announced periodically and then never mentioned again.[2]

In the late 2000s, one rarely picked up a financial newspaper without seeing an announcement, often without details, of foreign direct investments (FDIs) made by the United Arab Emirates (UAE) and Saudi Arabia (and to a lesser extent Qatar) in large tracts of Pakistani agricultural land.[3] The transactions seemed quite logical: there is very limited potential for agricultural expansion in the Gulf, and Pakistan has a regional comparative advantage in crop production, especially wheat and rice – essential items in Gulf diets. The country’s vast expanses of cultivable wasteland seemed to be crying out to be made productive.

Yet today, when one might expect to see reports of a massive surge in exports of food from Pakistan to the Gulf, there is scarcely a mention of Gulf-Pakistani agricultural trade or investment. In fact, a World Bank report[4] finds no evidence of a single foreign-financed agricultural project in Pakistan having come to fruition, even though the country ranked second to Sudan in terms of announced Gulf agro-investments.[5] How did such a promising idea (which appeared to offer a textbook example of a win-win situation) fail?

Agricultural Insufficiency in the Arab Gulf

Gulf interest in Pakistan as a reliable source of food gained significant momentum in 2008. At that time Gulf Cooperation Council (GCC) governments became deeply concerned about developments in the world economy and their limited means of expanding domestic agricultural production to meet the needs of their rapidly expanding populations.

Food riots in developing countries were common, as the dollar price for food grains nearly doubled from 2006 levels. The price of rice jumped to $907 per ton in April 2008, almost triple November 2007 levels.[6] In response, major grain-exporting countries such as India and Vietnam introduced export bans, causing great consternation among the Arab Gulf states.

In 2008 Saudi Arabia was forced to phase out a 30-year program to reach self-sufficiency in wheat and other crops.[7] The Kingdom had managed to achieve its goal, but at the cost of depleting much of the country’s scarce supplies of aquifer water. The program was simply no longer sustainable. With the phasing out of domestic production, Saudi Arabia will become 100 percent dependent on imported wheat by 2016.

In an increasingly uncertain environment, Saudi Arabia and the UAE (and to a lesser extent Qatar) decided to take matters into their own hands by bypassing world food markets and instead seeking land overseas to use for agriculture.[8] Bahrain and Oman, lacking the oil income of their richer neighbors, were less active; Oman refrained from foreign agricultural investment altogether, opting instead to building up its strategic food reserves.[9]

The Saudi and UAE focus was on land to grow crops such as rice, wheat, sugar, and fodder crops such as alfalfa, maize, barley, and soybeans. The need for livestock feed was particularly high, with Saudi Arabia importing nearly half of the world’s traded barley and producing less than half of its requirements of green animal feed such as alfalfa.[10]

All of these crops were ideally suited to the Pakistani environment. The Pakistani government began staging “farmland road shows” across the Arab Gulf to attract investor interest.[11] In 2008, the Pakistani government stepped up its attempt to attract foreign capital by offering tax exemptions, duty-free equipment imports, and 100 percent land ownership in special free zones in its agriculture, livestock, and dairy sectors.[12] Land investors were also exempted from the country’s existing labor laws.[13] The government reportedly even offered to provide a 100,000-strong security force to protect investors.[14]

In their quest to acquire agricultural land in Pakistan, the Gulf countries relied on several key organizations and firms to facilitate the transactions.  In Saudi Arabia, The King Abdullah Initiative (KAI) for Saudi Investment in Agriculture Abroad[15] was established, with the aim of achieving national food security through building integrative partnerships with countries that had a high agricultural potential. The KAI acts as an investment facilitator, and its role in a potential host country begins by undertaking bilateral discussions on behalf of the Kingdom. Its focus is on paving the way in making it easy for investors to undertake FDI in third countries.

The UAE has relied on Abraaj Capital,[16] a Dubai-based private equity investment firm, to facilitate investments in foreign agricultural projects.  Abraaj acts as a financial and strategic partner. Rather than forming start-up companies, Abraaj prefers to buy existing well-managed firms and then to upgrade their value by bringing in specific management skills, thus increasing productivity and efficiency.

Al-Qudra Holding is an Abu Dhabi-based firm involved in agricultural investments through its subsidiary, Al-Qudra Agriculture.[17] In July 2008, the company announced its plan to acquire 400,000 hectares of farmlands in Asia (Pakistan, Vietnam, Thailand, and India), the Middle East (Syria), and Africa (Sudan, Morocco, and Algeria).[18]

Being semi-private, Al-Qudra prefers to avoid the complications often involved when a company linked to a government tries to buy land in another country. Its usual approach is to operate through long renewable leases (minimum 25 years) as opposed to outright land acquisition. Its focus is on strategic crops that can firstly address the food requirements of the UAE.

Official records regarding agricultural investments in Pakistan are sketchy and the facts elusive.[19] It is not clear how much land is available to investors, the number of hectares sold or leased so far, and who is in fact doing the investing in Pakistan.

The following list describes some of the more spectacular land sales that have been reported unofficially:

What actually happened to these plans? Apparently not much. While specific project information is not available, aggregate figures of total FDI do, however, tell part of the story.

In 2007, the start of the supposed massive Gulf investments in Pakistani agricultural land, Saudi Arabian FDI[25] in Pakistan was $US46.2 million but subsequently plummeted. FDI from the UAE into Pakistan has generally held up better, but it has sharply declined in the past several years. [See Figure 1.] 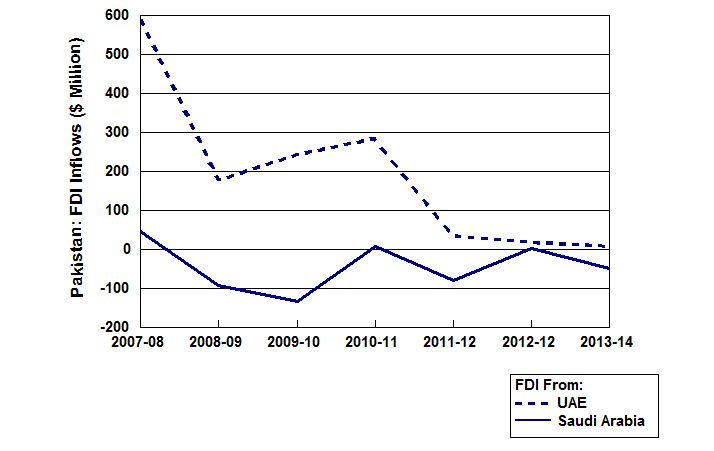 Overall, FDI in Pakistan has fallen dramatically since 2007 when it reached a peak of US$8 billion and was largely supporting the country’s GDP growth of over 7 percent, one of the highest in South Asia at the time. Thereafter, it sharply declined, reaching bottom at US$750 million in FY 2013-2014, the lowest in the region, if not in the world.

Reasons for the Lack of Foreign Investment

A number of theories have been put forth as to why Gulf FDI did not flow into Pakistan’s agricultural sector in particular and into the country in general. Separating out the two is nearly impossible.

For one thing, world food prices stabilized[26] after the 2008 spike and have now receded somewhat from the media spotlight. There also seems to be more of a consensus among food-exporting countries to abstain from sharp stoppages in food exports during periods of rising prices.[27]

Politically, the Saudi government reportedly regarded Asif Zardari, Pakistan’s prime minister at the time, with mistrust, if not disdain. The governing Pakistan Peoples’ Party (PPP) also was reportedly[28] viewed with suspicion in Saudi royal circles, because of the suspected Shiite affiliation of the Bhutto family.

One ever-present concern was the potential political and social instability stability that large exports of food from foreign-owned Pakistani farms to the Gulf might precipitate. A case in point is Madagascar, where a land deal contributed to widespread political instability and eventually in a change in government.[29] Pakistan’s food insecurity and poverty are a combustible mix that could easily explode into conflict. In countries such as Pakistan, where violent, extremist anti-government movements have mastered the ability to exploit land-based class divisions, the risks are particularly high.

In fact, Pakistan’s food insecurity is well documented in the Economist Intelligence Unit’s (EIU), Index of Food Security.[30] The EIU defines food security as “the state in which people at all times have physical, social and economic access to sufficient and nutritious food that meets their dietary needs for a healthy and active life based on the definition established at the 1996 World Food Summit.” The EIU’s overall index of food security is the composite of three sub-indexes: affordability, availability and quality, and safety.

Given the stability of the index for these years, it is unlikely that the situation differed significantly during the period (2008-2011), when most of the major decisions were being made on whether to finalize investments in Pakistan and begin exports to the Gulf.

The major lesson here for the GCC states is that food security is not dependent on FDI investments in foreign countries, particularly ones suffering from food security problems themselves. For all the publicity given to Gulf investments in Sudanese agriculture, little in the way of production has taken place.[31] Conflicts with local farmers are on the rise, and there is the growing realization that exporting food from Sudan during periods of domestic food shortages would create a very volatile situation.

Pakistan is now moving ahead with agro corporations rather than land sales as a means of luring in Gulf investment.[32] This new approach could result in a boom in Gulf FDI ― or in another mirage.

[25] All FDI figures for Pakistan are from: Pakistan Board of Investment, Foreign Investment Inflows in Pakistan, http://boi.gov.pk/ForeignInvestmentinPakistan.aspx.