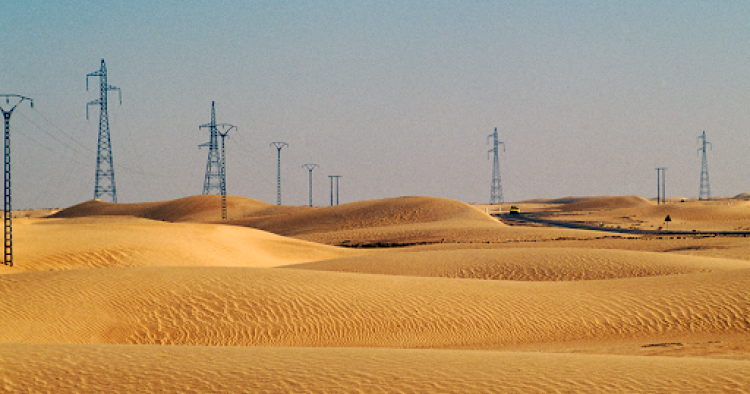 Algeria is at a critical stage in its energy sector development. The nation has both the potential and the incentive to maximize its natural resources and become a renewable energy leader. In addition to its status as the second-most-populous country in North Africa, Algeria is noteworthy for its relative size, wealth, location, gas reserves, renewable energy potential, and greenhouse gas emissions.

Just 150 miles from Spain and Italy across the Mediterranean Sea, Algeria also borders Mauritania, Niger, and Mali to the south, Morocco to the northeast, and Libya and Tunisia to the west, connecting the MENA region with both southern Europe and sub-Saharan Africa. Algeria is the wealthiest country in the region by GDP per capita, and the largest nation on the continent by land area. In addition, it enjoys more than 3,000 hours of sunlight annually, giving it substantial solar potential, yet it ranks third in Africa in terms of emissions of carbon dioxide (C02), a powerful greenhouse gas. An OPEC member since 1967, Algeria is one of Africa’s largest hydrocarbon producers, with oil and gas revenues historically comprising about half of the national budget and 90 percent of export earnings.

Yet recent oil and gas price volatility and increasing domestic electricity demand provide impetus for Algeria to prioritize clean energy investment. Stagnating hydrocarbon production and a growing urgency to address climate change provide additional incentives for Algeria to diversify its electricity generation mix. To respond to these challenges, the government has set a target of deriving 27 percent of electricity generation from renewable sources by 2030 and increasing generation capacity from renewables to 37 percent by the same year.

Natural gas accounts for 96 percent of Algeria’s 21,400 megawatts (MW) of installed capacity, with the remaining 4 percent comprising a combination of oil, solar, hydro, and wind technologies. By 2028, however, the Commission for Energy and Gas Regulation (CREG), Algeria’s energy regulator, projects total installed capacity will increase by nearly 45 percent to 36,000 MW. Under this proposed plan the share of natural gas would fall to 84 percent while that of solar technologies would increase to 15 percent of installed generation capacity. While unlikely to meet the nation’s renewable energy targets, this scenario would represent an important shift toward integrating substantial renewable energy generation into the nation’s power network.

This demographic evolution applies upward pressure on energy demand in general and electricity demand in particular. From 2015 through 2019, electricity generation in Algeria increased from 64,663 gigawatt hours (GWh) to 76,229 GWh to meet rising electricity demand, equivalent to an average annual growth rate of more than 5 percent.

Algeria has developed a reverse tender scheme to help drive investment in renewables, in which long-term contracts known as power purchase agreements (PPAs) are awarded to companies that offer to sell power at the lowest price. Sonelgaz, a state-owned utility, serves as the counterparty to the PPAs.

Algeria’s first reverse tender took place in 2019, but it was undersubscribed: Offers were only submitted for 90 MW, while the tender process called for a total of 150 MW. The limited success was due to both the novelty of the process in Algeria and the tender rules. The opportunity limited auction participants to Algerian companies or joint-venture arrangements with a mandatory 51 percent stake for the Algerian entity. Local content requirements around solar modules and other equipment were also applied, despite relatively limited solar-related manufacturing capacity at the time. Additional requirements mandating that financing come from Algerian institutions represent a further challenge. While the 2019 tender did not meet the proposed targets, it likely proved a useful learning exercise for both the Algerian government and investors and will still result in an increase in solar capacity.

The planned 4,000-MW Tafouk 1 solar project is also providing momentum to meet Algeria’s renewable target. Five tenders of 800 MW each are expected to be held for the project. Given its size and the Algerian local content requirements, Tafouk 1 could significantly increase the nation’s manufacturing capacity for solar components, including modules, racks, cables, and other equipment. The tenders should also lay the groundwork to move the nation toward a more competitive electricity market, which will facilitate a more efficient sector and increased renewable energy penetration.

It is important to note that the requirements for local content, local financing, and joint-venture partnerships may cause hesitation among some investors and could also increase the power prices resulting from the auctions. Yet such policies can encourage knowledge transfer to the local economy and stimulate economic development. Given Algeria’s location at the crossroads of Europe, the MENA region, and sub-Saharan Africa, the nation could conceivably become a manufacturing supply hub for the renewables industry. Algeria already has three solar panel facilities totaling 260 MW of annual solar panel production capacity (about 40 percent of which became operational in 2020).

Algeria is making notable progress in the development of its renewable energy sector, yet challenges remain. Issues related to energy subsidies, renewable tender rules, and the financial and operational health of Sonelgaz, the state-owned utility and counterparty in renewable tenders, present barriers for some investors. Security threats, particularly in the south of the country, combined with recent political changes and protests, may also pose real challenges as well. Yet Algeria’s overall trajectory toward a cleaner and more sustainable power sector is clear. While the precise path and timeline of the sector’s development will unfold with time, there is clear momentum from the increasingly competitive economics of renewable power technologies, growing consumer demand, and Algeria’s financial incentives to diversify its electricity sector. For investors with the appropriate risk appetite, know-how, and financial wherewithal, Algeria’s clean power sector represents an interesting investment opportunity.

Michael Hochberg is an energy industry professional with expertise in power project development, electricity markets, and regulation. His experience includes renewable project origination & development at Hecate Energy, and management consulting in the Global Energy & Utilities practice of PA Consulting. Michael is also a 2020 Fellow at the Clean Energy Leadership Institute and a non-resident Research Associate at the Oxford Institute for Energy Studies. The views expressed in this piece are his own.