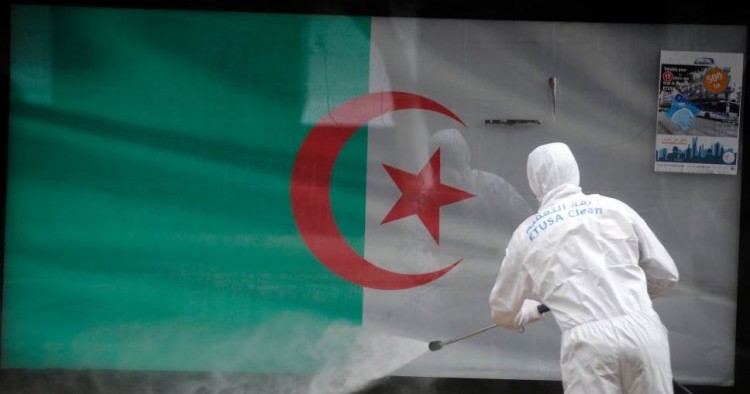 Even as a growing number of Arab and African states look to the International Monetary Fund (IMF) for assistance to help counter the economic fallout of the coronavirus pandemic, Algeria has made it clear it will not follow suit. Despite the fiscal challenges, economic crisis, social unrest, and public health emergency, President Abdelmadjid Tebboune has insisted that Algeria will not seek a loan to ease the country’s socio-economic woes. Tebboune declared that “accumulating debt harms national sovereignty” and will weaken the country’s position toward the Palestinian cause and the Western Sahara issue.

He also recalled Algeria’s bad experience in the 1990s with the IMF Structural Adjustment Plan (SAP) and explained that he prefers “to borrow from Algerian citizens, rather than the IMF or World Bank.” Beyond the long-overdue promises to diversify the economy, Tebboune’s crisis response package involves a 50 percent cut in public spending and investments, a $10 billion reduction in imports, as well as efforts to expand the use of banking services by those working in the informal sector, which accounts for 45 percent of the gross national income (GNI).

These measures will do little to support an already frail Algerian economy, however, and the situation is only likely to get worse. The uncertainty about the country’s fiscal future and the threat to stability that it brings comes at a particularly difficult time politically. Significant questions remain about the political back and forth between the peaceful popular protest movement known as Hirak and the country’s leadership. Adding to the political impasse are the issues of Tebboune’s own legitimacy and the loss of equilibrium between the president, the military, and the intelligence services.

The trauma of the past

Beyond the ideological reasons for not wanting to borrow from the IMF, for Algeria the Fund is also synonymous with bad memories. The socio-economic crisis that followed the 1986 drop in oil prices led to the October riots of 1988 and the violent intervention of the Army. The rest of the story is well-known: the fall of the single-party system, the rise of the Islamic Salvation Front (FIS), and the military coup of 1992 that initiated a decade-long civil war.

For Algerians and policymakers the economic collapse of the country and the SAP are synonymous with “austerity” and the “loss of sovereignty,” respectively. As an Algerian politician explained, “Back then, we accepted the SAP unconditionally, and it was a shock therapy. […] It is Algerians who paid a hefty price for this plan, and we do not want this to happen again. We learned from our mistakes.”

For the majority of Algerians who lived through the 1990s, the SAP meant “austerity,” with increasing prices, falling purchasing power, and rising unemployment, alongside the declining fortunes of the middle class and the further marginalization of the poor. The Algerian dinar experienced a series of successive devaluations that led to a significant drop in the purchasing power of those on fixed incomes, which back then represented around two-thirds of the population. Employees’ purchasing power fell on average by 20 percent against 41 percent for executives. This impoverished the middle class and enriched the rentier layers of society, such as large landowners and merchants. In addition, inefficient public companies were restructured, leading to massive layoffs (between 400,000 and 500,000 people) and rising unemployment, which primarily affected youth and women. At the same time, the housing crisis also got significantly worse as the state had to abandon its social policy, even as there was massive internal displacement — totalling approximately 1.5 million people — due to the security situation.

Aside from some monetary measures that were meant to stabilize deflation, the structural reforms requested by the IMF to transition Algeria to a market economy were not implemented. Rising oil and gas prices, coupled with cuts in investments and public spending, allowed the regime to avoid major reforms aimed at diversifying its economy away from hydrocarbons and changing its growth model. To justify its delays, the regime wielded the security question and the terrorist threat, which influenced the decisions of the IMF as much as those of Western powers (mainly the European Union).

The election of former President Abdelaziz Bouteflika in 1999, the end of the civil war, and two decades of high oil prices allowed the regime to avoid economic anxiety and social unrest. The authorities invested in development projects, free housing programs, generous subsidies, and excessive handouts, especially for youth, to buy social peace. Coupled with a package of constitutional reforms, these steps boosted the regime’s legitimacy and allowed it to weather the unrest that swept across the MENA region in 2011 and to resist the drop in oil prices in mid-June 2014. Since then, the authorities have been reluctant to cut social spending and subsidies and have been betting on the recovery of oil prices. This strategy paid off for a while, but the sharp drop in oil prices in March, which saw them reach a historic low of $19.46 a barrel, put an end to this gamble.

As a hydrocarbon-rich country dependent on oil and gas for 95 percent of its export revenues, Algeria is highly vulnerable to fluctuations in oil prices. As such, its economy was performing poorly even before the March 2020 oil price crash and the onset of the coronavirus pandemic. For instance, piped gas supplies to Spain, a key customer for Algeria, were down 48 percent in the first two months of the year, before Spain was hit by the coronavirus. The same was also true for Italy, where piped gas supplies were down 35 percent for the first four months of 2020.

Even as oil prices are collapsing, there is a growing need to spend money to address the pandemic. With 609 deaths and 8,503 confirmed cases, as of May 26, Algeria has the second-highest death toll in Africa and the third-highest in the MENA region. To manage the health crisis while compensating for the sharp decline in oil export revenues, the government is drawing on its foreign reserves, and it is likely to continue doing so as the pandemic drags on. Over the past six years, its reserves have been dramatically depleted, falling by $132 billion from $194 billion in 2013 to just $62 billion in 2020. According to local media, Algeria’s reserves will be gone by 2021.

In this increasingly difficult fiscal environment, the Algerian government has begun to make cuts, although without referring to them as such, instead speaking of a “rationalization of spending.” In early March, the government announced it would cut its budget by 30 percent, only to declare two months later that the reduction would be increased to 50 percent, while the wage bill for the health and education sectors will remain unchanged. The state-run national oil company, Sonatrach, was asked to cut its operating expenses and capital expenditure by 50 percent as well.

As usual, while announcing the cutbacks, the authorities have simultaneously promoted continuity and highlighted their achievements, sending mixed messages to the already doubtful population. The energy minister, Mohamed Arkab, has been praising the new hydrocarbon law and its “ambitious work” to promote the national energy sector while failing to mention that an unattractive business environment and a poor domestic political climate are likely to keep foreign investors at bay. Similar to measures taken in 2016 and 2019, the government has decided to tighten expenditures by reducing its import bill, capping it at $31 billion in 2020, down from $41 billion the previous year.

Additional cost-saving measures include an end to the use of foreign expertise, which, according to the presidency, will help to save $7 billion per year. The government also announced that several infrastructure projects, especially power plants, will be put on hold, and taxes as well as credits granted by public banks will be collected promptly. According to President Tebboune, the government will also be relying on increasing the banking of money earned by those working in the informal sector of the economy as a way of making up for the state budget deficit. He has suggested that he could ask the central bank, Banque d'Algérie, to grant approvals for those seeking to open Islamic banks, with an eye to bringing money currently outside the formal financial system, estimated at more than $45 billion, into Algeria’s banks.

To ease fears over the cutbacks and mindful not to alarm the population further, the government has reiterated its commitment to social programs such as housing. In March, the wali (governor) of Algiers, Yusef Churfa, announced the delivery of 7,000 social housing units by the end of 2020. He was backed up by Prime Minister Abdelaziz Djerad, who promised to finalize, as soon as possible, housing programs under construction, including a portfolio of 974,300 units, of which 648,643 are in progress and 325,657 have yet to be launched. In the same vein, the government also backpedaled on an anti-pollution tax on vehicles, which was supposed to be paid by every vehicle owner taking out an insurance policy.

The Algerian authorities misused the surplus that they accumulated during the 2000s, overspending without clear priorities in an effort to buy social peace while allowing a select elite to enrich themselves at the expense of the Algerian people. Growing anger at the regime and the failure of its successive governments gave rise to the Hirak protest movement of Feb. 22, 2019, which resulted in the resignation of former President Bouteflika and the jailing of many business tycoons. As an IMF official working on Algeria explained, “Algeria has sufficient buffers to accommodate the crisis in the short term. The longer the crisis lasts in the rest of the world, the greater the risks are for the Algerian economy, and for its ability to adjust smoothly to the new reality of the lower oil price environment, difficult external financing conditions, and the continuous fall in its international reserves.”

The expected sharp slowdown in economic growth in the coming months will lead to an increase in an-already persistently high unemployment rate and a fall in incomes. Worsening social and economic conditions will only heighten the importance of the social question at the heart of the popular protest movement. Once the Hirak again takes to the streets after lockdown measures are lifted, the regime will struggle with greater unrest.

The government has no more fiscal room left to transform the structure of Algeria’s economy, diversify its productive sectors, and increase its competitiveness. The North African country is exposed to real dangers, and yet today’s decision-makers seem unable to get ahead of the crisis that will soon hit the country. The coming period will test the government’s capacity to adjust and the regime’s ability to maintain itself.

Dalia Ghanem is a resident scholar at the Carnegie Middle East Center in Beirut, where her work examines political and extremist violence, radicalization, Islamism, and jihadism with an emphasis on Algeria.