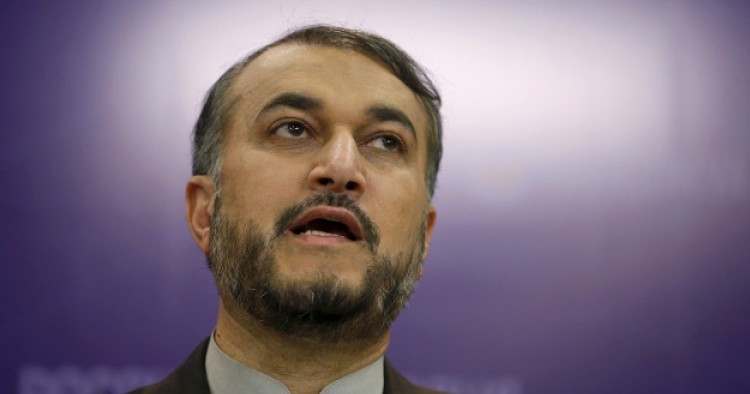 Hossein Amir-Abdollahian, a senior Iranian diplomat close to the Islamic Revolution Guards Corps (IRGC) came back into the Iranian headlines this week charging that the US and Israel were determined to change the borders of nations in the Middle East as part of an attempt to weaken the so-called “resistance,” the anti-US and Iran-led bloc of Lebanese Hezbollah, Hamas and Bashar al-Assad of Syria; and that Iran had a duty to block these nefarious attempts and redouble its support to its regional allies.   While hardly a household name in the West, Amir-Abollahian has been the IRGC’s soft face in the Middle East region, and now seems to be expanding his profile to speak out on issues relating to the US as well.

Amir-Abdollahian’s last official title was deputy foreign minister for Arab and African affairs, which made him responsible for the day-to-day management of some of the most significant files at the foreign ministry in Tehran. These included Iranian policies toward Iraq, Syria, Lebanon, Bahrain and Yemen, the hotbeds of conflict in today’s Middle East. In an effort to assuage US concerns, Iranian Foreign Minister Javad Zarif recently removed Amir-Abdollahian from his position. However, in a clear show of force in order to demonstrate its political weight and determination to continue Iran’s interventionist policies in the region, the IRGC made sure Amir-Abdollahian remains a central voice. Shortly after his departure from the foreign ministry, he was made a special advisor to the speaker of the Iranian parliament and continues to be a darling of the hardline media in Iran.

Amir-Abdollahian is a man with exceedingly deep political backing that go well beyond the walls of the foreign ministry or the Iranian parliament (Majlis). That Amir-Abdollahian represents a special case was evident when the moderate government of President Hassan Rouhani took over in August 2013 after the 8-year presidency of the populist right-wing Mahmoud Ahmadinejad. In his time as president, Ahmadinejad had let elements from the IRGC, the country’s powerful and predatory military-political body, enter civil governmental affairs like no time before. Amir-Abdollahian’s sudden rise was a product of this trend.

When Zarif took over as foreign minister on  August 15, 2013, the initial expectation was that Amir-Abdollahian would be replaced. He had been appointed to his role during the government of Ahmadinejad in 2011. It took Zarif 19 days to appoint his inner circle and every senior official from the previous government was replaced. The only exception was Amir-Abdollahian.

He stayed because his purge by Zarif would have upset the generals in the IRGC, the men who in reality control much of Tehran’s foreign policy in its immediate neighborhood. Amir-Abdollahian stayed in his job as the IRGC’s key envoy at the foreign ministry. It would later emerge that Zarif had been under pressure from within the Rouhani government to replace Amir-Abdollahian with Mohammad Sadr, an advisor to Zarif who had previously held the job as deputy foreign minister for Arab Affairs and has been critical of Iran’s regional policies and particularly Tehran’s support for Al-Assad. But the Rouhani-Zarif team was not ready to pick up a fight with the IRGC.

Amir-Abdollahian, a tall 51 year-old, comes from Damghan, a town in Semnan province, which is also the home region of both former President Ahmadinejad and also Iran’s sitting President Hassan Rouhani. He holds a Ph.D. from Tehran University in international relations and is said to be fluent in Arabic and English languages although he speaks to the media only in  Persian.

He first came to the attention of the outside world in 2007 when he was assigned to be a member of a small team of Iranian negotiators who met in three rounds with American counterparts on the security situation in Iraq. They would face US Ambassador Ryan Crocker and his team in Baghdad. The other two prominent Iranians in those talks were Hassan Kazemi Qomi and Hassan Danaei-far, the then Iranian ambassador to Baghdad and his subsequent replacement.

Both men hail from the IRGC’s Qods Force, which runs the IRGC’s foreign operations and was spearheading Iranian policies in Iraq. Amir-Abdollahian was at the time in charge of the foreign ministry’s special headquarters on Iraqi affairs. This was at best no more than a liaison office with the Qods Force having the undisputed upper hand in shaping and implementing Tehran’s Iraq policy.

That Amir-Abdollahian - a relatively young man and of junior rank at the time,at least by the standards of the Iranian diplomatic corps – was part of the first open rounds of talks with the Americans since the Iranian revolution in 1979, speaks volumes about the trust that at least the IRGC puts in him. This is probably no truer than for General Qassem Suleimani, the head of the Qods Force.

Nothing much came from those American-Iranian talks in 2007, but Abdollahian was quickly shifted to another sensitive Arab file, that of Bahrain. Appointed as ambassador to Manama in 2007, his first few years were distinguished by his ability to help reduce tensions with the Sunni governing Bahraini elites that rule over a Shiite majority. It was on his watch that Iran and Bahrain began to look for an expansion in trade and serious talks were held about Iranian gas exports to Bahrain. But Amir-Abdollahian’s gains in Bahrain were nearly entirely overturned when a former Iranian speaker of the parliament, Ali-Akbar Nateq Nouri, in 2009, called Bahrain “Iran’s 14th province.” This left the Bahrainis fuming, and it fell on Amir-Abdollahian to reassure the Bahrainis about Iran’s respect for the country’s territorial integrity and sovereignty.

At the onset of the Arab Spring in early 2011, Abdollahian was recalled to Tehran and appointed to his present role as deputy foreign minister of Arab and African affairs. The Qods Force was soon massively escalating its operations in the region – from militarily aiding the –Al-Assad regime in Syria to reassuring Iran’s allies such as Hezbollah in Lebanon and the Houthi movement in Yemen – on levels not previously seen. And General Suleimani and the Qods Force would have no one other than Amir-Abdollahian at the foreign ministry to make sure policy discrepancies are avoided. He became both the chief liaison officer between the IRGC and the foreign ministry and the IRGC’s unofficial diplomatic spokesperson.

When the Israelis on January, 18, 2015 attacked a convoy in the Syrian sector of the Golan Heights that led to the death of a senior IRGC commander, it was Abdollahian who first publicly vowed retaliation by the IRGC. The commander, Mohammad Ali Allah-Dadi, was a member of the Qods Force, and handpicked by General Suleimani. Amir-Abdollahian claimed to have told the Americans that the Israelis had “crossed Iran’s red line” and had to “wait for the consequences.” Ten days later, Hezbollah struck at an Israeli convey on the Israel-Lebanon border, killing two and wounding seven Israelis.

Amir-Abdollahian was not officially a member of the IRGC’s Qods Force, but to call him a diplomat alone was always to confuse why the man rose so quickly to a senior position within the Iranian foreign ministry. He was in essence the embodiment of compromise-making between two of Iran’s key foreign policy decision-makers: the foreign ministry and the IRGC. At the same time, Amir-Abdollahian’s ability to remain a key foreign policy figure in Tehran shows that the IRGC has no intention to let the likes of Zarif stand in the way of IRGC’s military campaigns in the region.