An attack against all in the Middle East 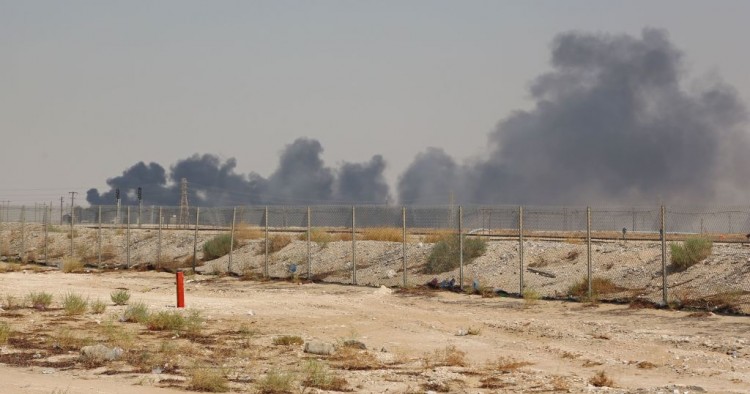 “This will not stand, this aggression against Kuwait,” President George H.W. Bush famously said on Aug. 6, 1990, in response to Saddam Hussein’s takeover of Kuwait and threat of rolling his tanks into Saudi Arabia.

Shortly thereafter, Washington, with the full blessing of the American people, assembled the largest and most powerful coalition on earth to evict the Iraqi dictator. The point was to send a firm and unequivocal message to all adversaries not to mess with the international energy market, which specifically meant not to harm the safety and security of the oil-rich Arab Gulf states, and especially Saudi Arabia, the largest oil exporter in the world.

Almost three decades later, Saudi Arabia is under direct assault, and America’s response is muted. Despite U.S. President Donald Trump’s verbal threats against Iran, which is behind the attack, he’s not seriously contemplating using force.

How things have changed, and dramatically so.

This dangerous episode, the first of its kind in the 70-plus year history of U.S. involvement in the Middle East, raises several important questions about our entire position in the region, and whether our core interests there have changed. This is a crucial conversation that should be had. But not today. What's most urgent now for U.S. policymakers is how to prevent this from happening again and how to most effectively defend U.S. partners from aggression in this still vital part of the world.

The issue of U.S. protection of allies and partners is one Americans had to wrestle with constantly and most profoundly during the Cold War. Luckily, the United States won that global contest without any bullets exchanged between NATO and the Warsaw Pact, thus unburdening Washington of the impossible decision of having to pick between defending its friends and risking nuclear war with the Soviets on one hand, and staying put and possibly inviting more Soviet aggression on the other hand.

That strategic conundrum is rearing its ugly head again, although this time in the Middle East. Even though Iran is certainly not the Soviet Union and the risk of nuclear war with it is (at least currently) nonexistent, America has to balance between its genuine desire to get out of the business of endless wars in the Middle East and its security commitment toward its closest Arab partners. Doing nothing will almost surely convince the Iranians that they can act with impunity in the Middle East. Using lethal force against Iran might lead to an all-out war, given how combustible things already are across the region.

The United States might still resort to kinetic action, perhaps covertly, to warn the Iranians not to do this again. But having communicated to the entire world that America wants out of the Middle East, this might not strike much fear in the heart of Tehran. The Iranians have watched Washington abandon Syria, withdraw U.S. troops from Iraq prematurely despite the advice of the generals, and desperately look for an exit from Afghanistan. They know that even if the United States retaliates and lobs a few missiles at them, the U.S. commitment to the security of its partners is suspect.

So, what could communicate the U.S. security commitment without risking war with Tehran or returning to the days of (ineffective) military over-involvement in the Middle East? What will it take to reestablish U.S. deterrence in the Middle East?

First, we must recognize that there are no silver bullets here. It has taken Iran more than four decades to get to this point, patiently fortifying its position and expanding its influence in the region. No U.S. initiative, no matter how grand or clever, will reverse, nullify, or contain that Iranian march anytime soon. Certainly not if the United States does this alone.

And that is precisely the point.

The United States can no longer treat the Middle East as an American protectorate. The region’s stability should be a collective responsibility. The attack on Saudi Arabia is an attack on all nations who care about international security and the stability of the global energy market. This should be Washington’s most important message to the world at the upcoming United Nations General Assembly, including China, which imports more oil from the Middle East than any other country. This time, unlike in 1990, the United States does not need to rally the world to bomb the aggressor (not that anyone would join Washington in a war against Iran anyway). This is a time for a bold U.S. decision to genuinely invite others to pacify the region, and it goes beyond Operation Sentinel, the narrow military plan that U.S. Central Command is pursuing along with a handful of nations, including the United Kingdom, to police the waters of the Gulf.

It’s admittedly very hard to envision how the United States could effectively promote a new, international burden-sharing system in the Middle East that includes the Europeans, the Chinese, and the Russians, in the absence of skillful leadership in the White House. But that is precisely what it is going to take to prevent another attack and further calamity in the Middle East.

Bilal Y. Saab, previously a senior advisor at the U.S. Department of Defense, is Senior Fellow and Director of the Defense and Security Program at the Middle East Institute. The views expressed in this article are his own.