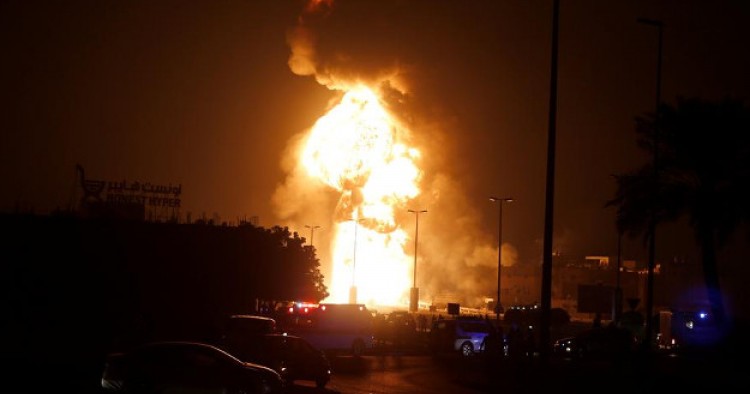 The Bahraini government said on Saturday that its security forces had foiled a number of terrorist plots and arrested 116 people who were allegedly members of an armed group run by Iran’s Islamic Revolution Guards Corps (IRGC). “The Revolutionary Guards formed several terrorist organizations and brought them together under one umbrella,” a statement released by the Bahraini Interior Ministry said. “The network was planning to target Bahraini officials, members of the security services… vital oil facilities and industries, with an aim to disturb security and public order and undermine the national economy,” it added. The statement further noted that Iran-backed Iraqi militia groups such as Asa’ib Ahl al-Haq and the Lebanese Hezbollah assist the IRGC in training and organizing Bahraini militants. "This is done through recruiting terrorist elements in Bahrain, arranging and coordinating training for them in terrorist camps, and providing them with funds, firearms, and explosive devices." Nearly half of those arrested had received training at IRGC facilities inside Iran as well in affiliated locations in Iraq and Lebanon, according to Bahraini authorites.

A large quantity of arms and explosives were also reportedly seized.

Comment: Over the past one year, Manama has repeatedly accused Tehran of aiding militant groups to plot attacks against the island kingdom. Last month, Bahraini authorities said they had arrested four members of a “terrorist cell” involved in a bomb attack on an oil pipeline and claimed that the suspects had received training in Iran by the IRGC. According to Al-Khaleej Online, the suspects were behind the pipeline explosion that occurred on November 10 near Buri village close to the Bahraini capital city of Manama. “The terrorists in Bahrain are recruited and their expenses for travelling to Iran are covered under the excuse of going on religious visits,” wrote the state-run Bahrain News Agency.

And in January, Bahrain’s interior minister said Tehran and its regional proxies were supporting militant groups that carry out terrorist actions on the Bahraini soil. Sheikh Rashid bin Abdullah al-Khalifa specifically accused the IRGC, the Lebanese Hezbollah and Iranian-linked Iraqi militia groups of sponsoring “terrorist groups” to destabilize Bahrain. He added that the Bahraini security forces had carried out 105 pre-emptive operations and arrested 47 members of three terrorist organizations. Many of those arrested are reportedly from the Saraya al-Ashtar, Saraya al-Muqawama al-Sha’biya and Saraya al-Mukhtar groups. The Iranian government, rejected the allegations as “unfounded.”

In November, Manama blamed Iran for the pipeline explosion. According to the Bahraini Interior Ministry, the blast was the latest example of a “terrorist act” under instructions from Tehran, the state-run Bahrain News Agency reported. In a Twitter message, the minister also called the attack a “dangerous Iranian escalation aimed at terrorizing citizens and damaging the world’s oil industry.” The explosion forced Saudi Arabia to temporarily suspend pumping oil into Bahrain for security reasons.

Last year, Bahraini officials also complained that the IRGC supported groups that attacked Bahraini security forces. In late March, for example, Bahrain’s Ministry of Interior said it dismantled an Iran-backed group that planned terrorist attacks in the island kingdom, including assassination of high-profile government officials. According to state-run Bahrain News Agency, 11 of the 14 individuals arrested were suspected of having received training in Iraq by the IRGC and Lebanese Hezbollah. The report added that the arrests were made following intelligence operations that tracked the suspects’ multiple trips to Iran. The Ministry of Interior further alleged that the group operated under the leadership of Murtadha Majeed Al Sindi and Qassim Abdullah Ali, two individual who reportedly live in Iran and are designated as terrorist by the Bahraini government.

The reports of Iran’s alleged connection with terrorist plots in Bahrain have not only further strained relations between Tehran and Manama but they are also worrisome to the US military as its Fifth Fleet is headquartered in Bahrain – a strategic location that helps the US Navy to ensure the security of maritime activity in the region, support the fight on terrorism, and monitor Iran’s subversive activities across the Middle East.