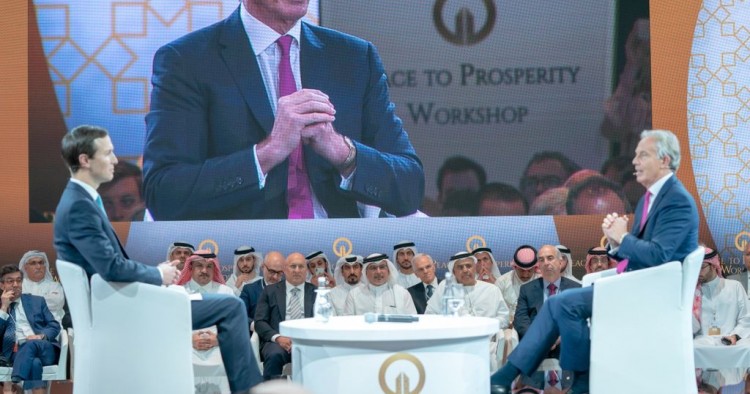 The economic workshop in Bahrain in late June produced some noteworthy moments that reflected recent changes in Israeli-Gulf relations: An interview of the Bahraini foreign minister by Israeli media, public interactions between Israeli and Arab businesspeople, a prayer at the local synagogue, and a generally positive vibe toward Israel. However, that was not the declared goal of the “Peace to Prosperity” workshop. President Donald Trump set out, more than two years ago, to resolve the Israeli-Palestinian conflict, and the Bahrain workshop was supposed to be an important step on the way. In reality, it came up short: Neither Israeli nor Palestinian officials attended, and it did not conclude with any tangible steps to advance the peace process. Instead, it was a low-level meeting and just one in a series of measures taken by the Trump administration since 2017 that have made the prospects for Israeli-Palestinian peace more distant, rather than closer.

The Trump administration is not the first to struggle when it comes to Israeli-Palestinian peacemaking. However, previous U.S. administrations sought a solution acceptable to both sides and were responsive to the interests of all involved. Besides the traditional U.S. bias in Israel’s favor, criticism of previous American administrations focused on the way they conducted the peace process, not on the political end-game and goals of their initiatives. This is not the case with the Trump administration, which seeks to change the rules of the game, the reality on the ground, and the nature of future Israeli-Palestinian relations. While Trump’s political plan to resolve the conflict has yet to be made public — and we are supposedly waiting for its launch — U.S. statements and actions suggest new policies are already being implemented, and they include several notable features.

Vague content: The Trump administration has been busy creating an aura of mystery around the political plan they have yet to reveal. They insist the plan is secret and known to only to a key few. Trump’s envoys drop hints about what is or is not in the plan; media briefings and leaks are subsequently denied; target publication dates are announced and then delayed using different excuses; U.S. officials visit various countries to consult on the plan, leaving their hosts at a loss. Taken together, we do not appear to be on the cusp of a significant move on peace. Rather the administration seems to be stalling for time, avoiding publishing its political plan while continuing to foster international discussion about it, thereby preventing other states from increasing their involvement as they wait for the release of the U.S. plan.

Ineffective incentives: The economic part of the Trump plan, published days before the Bahrain workshop, lays out a vision of prosperity for the Palestinians. It is supposed to convince them to engage with the U.S. plan by highlighting the benefits of doing so. However, if the Trump administration’s goal is to incentivize peace via economic dividends, this is not the right way to go about it. An effective incentive for peace should be clearly linked to conflict resolution and should address the key collective needs of the society in question. This was true for previous incentives, such as the Arab Peace Initiative, the EU’s offer of a Special Privileged Partnership, and the Obama administration’s security guarantees for the two-state solution. The post-conflict benefits were tied to a clear statement about the nature of the solution to the conflict. In this case, the U.S. proposal, which offers Palestinians a better economy, lacks reference to the political end-game and to the fulfillment of the Palestinian quest for independence. As such, it is seen by Palestinians as a humiliating bribe, an attempt to buy off their national aspirations with a large amount of money. Rather than promote engagement, this may lead to further alienation.

Low-level events: Absent an appealing plan and a real process, the U.S. has focused on organizing low-level events. Over the past two years, it has invited states to participate in roundtable discussions, brainstorming sessions, and a workshop, all centered on the economy. In March 2018, the White House invited various states for a discussion of how to address the humanitarian crisis in Gaza. In June 2019, it brought together different actors in Bahrain to discuss ways to bolster the Palestinian economy. In between, in February 2019, the U.S. also convened a conference in Warsaw to discuss regional security, mostly focused on the issue of Iran. The Palestinians did not take part in any of these events, while the Europeans gritted their teeth and sent mostly low-level delegates. The Arab world, especially Jordan, Egypt, and the Gulf States, attended the meetings on the Palestinian issue largely due to U.S. pressure. The Bahrain workshop was the first such event without official Israeli representation, despite Prime Minister Benjamin Netanyahu’s desire for a photo-op for himself or one of his top ministers with Arab leaders ahead of the September 17 elections. In short, U.S. attempts to bypass the Palestinians with international conferences to promote an official breakthrough in Israeli-Arab relations have so far proved unsuccessful.

Declarations and tweets: From time to time, President Trump and his emissaries announce various components of the U.S. plan and its approach to resolving the Israeli-Palestinian conflict. Of particular note is Trump’s initial comment to the effect that he does not care whether the solution is one or two states. Subsequently, his people reiterated that they do not intend to express support for a two-state solution and urged that core issues of the conflict (such as the status of Jerusalem and right of return for refugees) be taken off the table. U.S. officials criticized the Arab Peace Initiative, which they claimed had failed to bring peace and was therefore no longer relevant, recently even expressing support for Israel’s right to annex Palestinian territory. At the same time, U.S. envoys also tweeted remarks refuting rumors that the Trump plan would undermine Jordanian and Egyptian sovereignty or interests. All of these points paint a clear picture of the direction in which the Trump administration is heading, even if they haven’t published their plan.

Game-changing actions: In addition to their statements, the actions of the administration have also sent a clear message. These include Trump’s recognition of Jerusalem as the capital of Israel, the closure of the Palestine Liberation Organization office in Washington, the transfer of the U.S. Embassy to Jerusalem, and the closing of the U.S. Consulate in East Jerusalem and subordinating it to the U.S. Embassy. Other equally telling moves include the first official visits by the U.S. ambassador to settlements, and cuts in USAID-funded Israeli-Palestinian projects and the budgets for UNRWA and Palestinian institutions. These measures also point to a clearly defined game plan, reversing longstanding U.S. policy and clashing with the international community’s accepted views. More broadly, they are also seen as a deviation from international law, generating anger toward the U.S. and undermining its ability to serve as an honest broker.

Weakening Palestinian leaders and bolstering Netanyahu: The Trump administration has invested a great deal of time and energy in tarnishing the image of Palestinian Authority (PA) leaders. Whether this is designed to pressure the Palestinians to engage in the Trump plan or it is an attempt to cultivate an alternative Palestinian leadership, it has failed thus far. The U.S. emissaries have accused the Palestinian leadership of being serial rejectionists, supporting terrorism, and harming their people’s interests. They have penned opinion pieces against them, clashed with them on Twitter, and withheld a U.S. visa from Hanan Ashrawi, a veteran Palestinian negotiator. The PA was not even invited to the Bahrain workshop. All of this contrasts sharply with the administration’s warm public embrace of Netanyahu, including the ongoing coordination with him and his people — chief among them Israel’s ambassador in Washington — to mobilize support for his re-election, and recent intervention in his efforts to form a new government.

Taken as a whole, U.S. declarations and actions over the past two years make clear that the Bahrain workshop was not the real deal. Instead, it was only the tip of the iceberg. The Trump administration’s policy has made the prospects for Israeli-Palestinian peace more distant. It also goes against the outlines of a future peace agreement, which a majority of Israelis and Palestinians have supported in recent years. It weakens and delegitimizes a moderate Palestinian leadership committed to negotiations and opposed to terrorism. It places obstacles in the way of progress toward a two-state solution and excludes significant international elements that could contribute to the advancement of peace. Finally, it further alienates Israelis from Palestinians, making it even more difficult for those among them who still want to meet and cooperate, while aiding proponents of annexation in the Israeli political arena.

While Israel sees Trump as a great friend, his administration’s moves on the Israeli-Palestinian issue only serve to damage Israeli interests in the pursuit of peace. Israelis who aspire to promote peace with the Palestinians must take a stand against them, despite the difficulty of confronting Israel’s strongest ally. Just as leading figures in the U.S. Democratic Party criticize Israel’s policy on the Palestinians when necessary, so too must members of the Israeli opposition when the American president’s words and actions harm the prospects for peace.

Nimrod Goren is the Founder and Head of Mitvim - The Israeli Institute for Regional Foreign Policies and a Teaching Fellow in Middle Eastern Studies at the Hebrew University of Jerusalem. The views expressed in this article are his own.