Balochistan: From the periphery to the center of attention 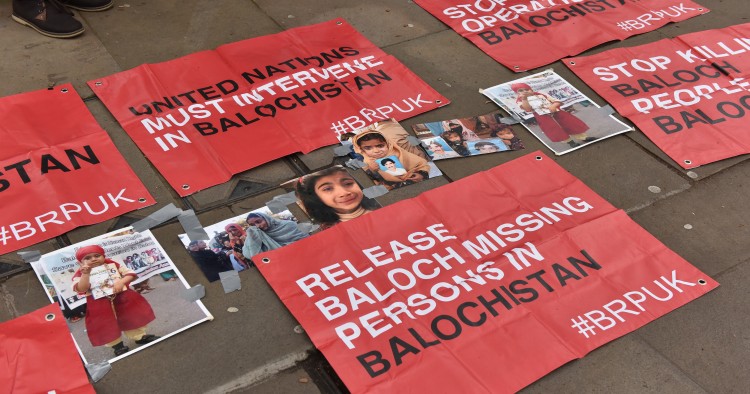 For the millions of Americans watching the 2018 New Year’s Eve celebrations in Times Square, a curious sign could be seen flashing in bright yellow throughout the night that referred to a place and a situation very few had ever heard of: “#Free Balochistan From Human Rights Abuses By Pakistan.” It was part of a wider campaign by the World Baloch Organization that also included signs in London at the Houses of Parliament, Marble Arch, and Shoreditch High Street. In July, during Pakistani Prime Minister Imran Khan’s heavily publicized visit to the United States, Baloch hecklers decried Pakistan’s treatment of Balochistan and trucks rolled through the streets of Washington, DC displaying television advertisements urging President Donald Trump to help end forced disappearances in Pakistan —a tactic currently used by Pakistani activists in the U.S. capital to highlight Indian abuses in Kashmir.

Perhaps it is fair to say that the stateless nation of Balochistan, a hitherto relatively unknown corner of South Asia divided between Pakistan, Afghanistan, and Iran, is rapidly emerging from obscurity. While the region does not get as much attention as other stateless nations such as Kurdistan, Uyghurstan, and Tibet, Balochistan is no afterthought to its stakeholders. With an estimated $1 trillion in natural resources and sitting astride an international crossroads of increasingly critical importance, Balochistan is becoming a stage on which the world’s powers are playing out their ambitions. China, the U.S., and India have all formulated Balochistan policies in the past few years, hoping to utilize the region to achieve wider international goals — and the three countries across which Balochistan is divided have been eager to use it as a bargaining chip for their own purposes.

China is focusing its plans on the port town of Gwadar — a project that cannot be completed without Islamabad’s support. For the United States, Balochistan has become one of the bargaining chips with Pakistan in dealing with the Taliban — without which peace in Afghanistan will remain elusive. For India, Pakistani Balochistan serves as an important international counterweight to Kashmir. The Balochis themselves, however — who have their own unique culture, language, and religious practices — have largely been left out of the decision-making process about the region’s future, often through violent means, and Balochistan  remains one of the poorest and least developed parts of South Asia.

Balochistan arguably stands at the center of the China-Pakistan Economic Corridor (CPEC), itself a part of Beijing’s Belt and Road Initiative, a strategy which seeks to help China gain influence by investing in infrastructure projects in developing countries. Established in 2015, the Corridor is one of China’s most important investments, with an estimated price tag of $62 billion. For Pakistan, it is seen as a way to further shore up support from China — an alliance that has become all the more critical given cooling relations with the United States and rising tensions with India, also a rival of China. Starting on the Chinese-Pakistani border, the Corridor makes its way south into Balochistan down to the port of Gwadar. Under the CPEC agreement, Gwadar is slated to be leased to China for around 40 years, with a total of $1.62 billion committed to modernizing the port. China plans to treat Gwadar as a special economic zone, similar to Hong Kong and Macau.

For China, Gwadar could drastically shorten the time it takes to trade with Europe, the Middle East, and Africa. Currently, Chinese ships bound westward have to make their way south and west through the Strait of Malacca — a trip that would be far shorter from Gwadar. Furthermore, security in the Strait of Malacca, one of the world’s busiest trade routes and a major chokepoint for oil and gas shipments, remains a concern, and the less Beijing needs to worry about it being open, the more confident it can be with its investments to the west. If China’s vision for Gwadar comes to fruition, it could very well end up the epicenter of Chinese trade with countries to the west, a scenario that would reshape international trade in the Indian Ocean. According to the Asian Development Bank, the CPEC agreement offers “enormous potential for Pakistan to boost its economy, reduce poverty, spread benefits widely, and help those likely to be affected by the new trade route.”

Indeed, after three years of heavy investment, China now accounts for 89% of Pakistan’s foreign direct investment inflows. However, the Baloch people have so far been left out of the picture and are viewed as an impediment to development by Islamabad. With new stakeholders entering the equation, the Balochistan conflict, which has been simmering for decades, risks escalating to a level few could have foreseen even 10 years ago.

The roots of the Balochistan conflict lie in the British withdrawal from South Asia and the foundation of Pakistan in 1947. The Baloch populated and ruled princely states of Las Bela, Kharan, Makran, and Khalat were obliged to integrate into Pakistan and united by Islamabad to create Balochistan Province in 1955. In 1958, the borders of the province were finalized when Gwadar, which had been ruled by the sultan of Oman since the 18th century, was incorporated. In the same year, the khan of Khalat declared independence, citing the immense cultural and linguistic differences between the Baloch and the ruling Panjabi elite. He was subsequently arrested by the military, and the insurgency was born.

When the Bangladeshi War of Independence led to its breaking away from Pakistan in 1971, Baloch nationalists saw their chance to achieve their goal of an independent Balochistan. Supported by Afghanistan and India, the Baloch insurgency was ultimately crushed by Mohammed Zia ul-Haq, leading to thousands of casualties. To counter Baloch nationalism, Islamabad employed a two-pronged strategy, using state-sanctioned Islam to break the traditional structure of Baloch society and promoting Deobandi thought (a puritanical Sunni ideology) in the region. Balochistan, with its large population of Zikris, Hazaras, Shi’as, and Hindus, became a focal point of Sunni extremism, with heterodox groups being targeted by both the state and militant organizations such as the Lashkar-e-Jhangvi, Sipah-e-Sahaba, and the Taliban.

By 2000, the Baloch nationalist movement in Pakistan gave rise to the Balochistan Liberation Army (BLA), a leftist-oriented group that remains the standard bearer in the fight for an independent Balochistan. With the start of the War on Terror in 2001, Pakistan was essentially given carte blanche by the U.S. to fight the BLA in exchange for its support in the war in Afghanistan — a move which, according to the South Asia Terrorism Portal, has claimed the lives of more than 4,500 civilians and has led to hundreds of thousands being displaced. To this day, estimates on the number of active BLA militants range from 500 to 6,000, and many prominent Baloch leaders live in exile in Afghanistan, the UK, and the U.S. Many senior BLA members are Zikri Muslims — a sect that feels that the group protects them against Sunni extremism and state repression.

To further complicate the scene, the BLA insurgency runs parallel to the Baloch insurgency in the Iranian province of Balochistan-Sistan, known as the Jaish al-Adl, or the Army of Justice. It is a Sunni militant group that is fighting against the Shi’a government of Tehran under a religious pretext, possibly with the support of Pakistan and other Sunni nations. Iranian Balochis face persecution on two fronts: both for being Sunni and for being non-Persian, much like the issues facing Iranian Kurds. The Jaish al-Adl is at odds with the BLA, which may even have covert support from Iran, and traditional Baloch nationalist thought, which ultimately aims for the creation of an independent, secular Greater Balochistan. The Baloch cause also gets wide support from India, especially under the leadership of Prime Minister Narendra Modi, who is eager to use Balochistan to distract the international community from the dire situation in Kashmir.

When the CPEC agreement was announced in 2015, Baloch nationalists were quick to accuse Islamabad of sidelining their interests in favor of Chinese investment and selling out Balochistan’s immense natural wealth without consulting them. Since then, BLA attacks have largely been focused on Chinese interests. Several deadly attacks on Chinese laborers have taken place since May 2017, which according to BLA spokesman Jeeyand Baloch, are part of the “BLA’s policy of not allowing any force, including China, to plunder the Baloch wealth in Balochistan.” Other significant attacks include a November 2018 attack on the Chinese Consulate of Karachi and the May 2019 attack on the luxury Pearl Continental Hotel in Gwadar.

Aware of the billions at stake if the BLA insurgency intensifies, Islamabad has severely tightened its security apparatus in the region. According to the journalist Akber Notezai, many Baloch, particularly Zikris, are afraid of being displaced along the CPEC-dominated M8 route that runs from Turbat to Hoshab — an action that could push an already alienated population toward the BLA for protection. The Pakistani Inter-Services Intelligence (ISI) has also aggressively pursued Baloch nationalist leaders living in Afghanistan suspected of plotting the December 2018 attack on Aslam Baloch in Kandahar. This could not have been done without the support of Afghanistan, a country that has traditionally shown leniency toward Baloch nationalists. On Sept. 7, 2019, Afghanistan, Pakistan, and China held a conference to discuss expanding intelligence cooperation, with the explicit purpose of fighting insurgency groups and improving security — a motion undoubtably aimed at the Taliban and BLA.

Particularly under the leadership of Prime Minister Khan, Islamabad has made considerable gains in turning the international community against the BLA, most significantly in the United States, which added the group to its list of global terrorist organizations on July 2 after years of being urged to do so. Washington’s willingness to tow Islamabad’s line is linked to its efforts to hold peace talks with the Taliban, something which cannot be done without Pakistan’s help. The Taliban itself also understands that the road to peace runs through Balochistan — a region where many high-ranking Taliban members live, and where Akhtar Mansour, the former leader of the Taliban, was killed in a U.S. drone strike on May 21, 2016. When unknown assailants killed Hafiz Ahmadullah Azkhundzada, the brother of the current Taliban leader, Hibatullah Akhundzada, in an Aug. 16 bomb attack in Quetta, the Taliban was quick to state that it would not seek reprisals for the attack in the hopes of continuing the peace talks.

While Balochistan has long been on the periphery of South Asian affairs, its location at the center of the CPEC investments has brought about major change for both the region and South Asia at large. Because of the CPEC’s potentially huge economic benefits for Pakistan, it is highly unlikely that Islamabad will offer any concessions to Baloch nationalists without a greenlight from China — a country not known for sympathizing with ethnic minorities. Any speculation that Prime Minister Khan will soften Islamabad’s Balochistan policy — a video recently emerged of him decrying Pakistan’s treatment of Balochistan from before he was prime minister — has largely been set aside, and he seems more than willing to clamp down on Baloch insurgents and exert international pressure on the BLA. What remains to be seen is how sympathetic Balochis will be to the BLA should they feel they are not benefitting from the CPEC’s supposed benefits. Similarly, the entanglement of Balochistan in the U.S.-Taliban peace process may end up becoming a thorn in the side of both parties if the BLA continues to expand — a situation that could have dangerous and unpredictable consequences for both domestic and foreign actors. Eyes are on Balochistan.

Philip Kowalski is a freelance writer and a contributor to the Middle East Institute. The views expressed in this article are his own.