Begin with the children: Child soldier numbers doubled in the Middle East in 2019 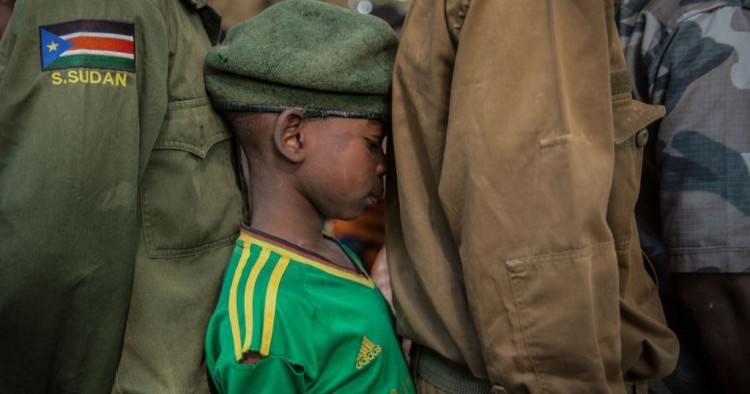 In 2017, the advocacy group Child Soldiers International estimated that more than 100,000 children were forced to become soldiers in state and non-state military organizations in at least 18 armed conflicts worldwide. The UN further reported that a majority of these children were actually under the age of 15 and that 40 percent of them were girls. This is a global problem that is getting worse and it must be addressed.

The UN has identified 14 countries where children have been widely used as soldiers. These countries are Afghanistan, Colombia, the Central African Republic, the Democratic Republic of the Congo, Iraq, Mali, Myanmar, Nigeria, the Philippines, Somalia, South Sudan, Sudan, Syria, and Yemen. The use of child soldiers not only spans the globe, it also happens in many locations where the world’s superpowers have deployed their own military forces. Therefore, those superpowers have a responsibility to help end this practice of child exploitation.

The international community must take action beyond just signing protocols at the UN. Many of the signatories simply ignore their obligations. It’s critical to understand the relevant international laws, force countries to sign these protocols through continuous isolation and scrutiny until they comply, and then hold them accountable for violating the protocols they signed.

The post-World War II Geneva Conventions consisted of four treaties and three protocols, setting the standards of international law for armed conflict. An additional protocol from 1977 addressed the rights of children in these conflicts by prohibiting state and non-state actors from using children under the age of 15 as combatants, and took the added step of designating the use of children as a war crime.

Adopted by the UN General Assembly in 2000, the Optional Protocol on the Involvement of Children in Armed Conflict (OPAC) raised the 1977 standard by barring the use of anyone under the age of 18 in conflict. OPAC states that individuals under the age of 16 cannot be enlisted to fight and individuals between the ages of 16 and 18 cannot be compelled to join an armed force.

Under OPAC, children must be fully informed of their duties and they cannot be combat-related until they attain the age of 18. For non-state actors that are signatories, there are no exceptions for those between the ages of 16 and 18. They cannot recruit or use anyone below the age of 18. By 2016, 70 percent of the state actors and 60 percent of non-state actors (with armed forces) had signed on to OPAC. More than 30 percent of globally recognized states refused to sign onto OPAC to help protect children from being exploited into soldiering.

In a controversial decision in 2019, that was opposed by many career professionals, the U.S. secretary of state waived the inclusion of Saudi Arabia on its annual list of countries that recruit child soldiers, even though it met all the criteria to be included. This is a glaring example of an OPAC signatory not adhering to the stipulations of their signed commitments. As an international community, we are not demanding 100 percent compliance, and that needs to change.

Exploitation by state and quasi-state actors

The UN Office for Children and Armed Conflict found that the number of children either forcibly or voluntarily fighting in the various conflicts in the Middle East and Africa doubled in number in 2019. This is not a new trend. This should shock and alarm the international community. The growth has come in Iraq, Syria, and Yemen — all Middle Eastern countries embroiled in intense conflict with no peace in sight.

In the past, children were used predominantly in supporting roles such as messengers, guards, and porters. This has changed. With weapons becoming lighter, more lethal, and easier to operate, children are more commonly being forced into combat roles. Due to their developing mental maturity children are easier to manipulate than adults, and cost less to support; it’s a win for the despots and a massive loss for the exploitable victims.

Yemen is a country of 29 million people, roughly 19 million of whom are in need of humanitarian aid; seven million are on the brink of famine and 540,000 are suffering from cholera. Further, the UN reported a 500 percent increase in the number of children fighting in Yemen between 2015 and 2016. These child soldiers come from Sudan and Libya, as well as Yemen itself.

Some of the child soldiers in Yemen are as young as 10 years old and have been recruited or forced to fight. Of the total, almost 70 percent are in forces affiliated with the Houthis and units loyal to former President Ali Abdullah Saleh. The other 30 percent have been recruited by terrorist groups like al-Qaeda in the Arabian Peninsula (AQAP) and ISIS - Yemen (ISIS-Y). Regardless of their use by state or quasi-state actors, the damaging consequences for the children involved are the same.

After ISIS fighters took control of swaths of Iraq and Syria and declared a caliphate in June 2014, the approximately 30,000-strong terrorist group focused considerable effort on developing the next generation of violent extremists. With nearly 700,000 children out of school in areas under its control, ISIS had easy pickings. Known as the “Cubs of the Caliphate,” an estimated 1,100 children between the ages of 8 and 15 were indoctrinated into the radical Islamist militant group.

While the “cubs” were mostly Syrian and Iraqi, foreign children also filled the ranks, coming to the caliphate with their families from places like the United States, Kazakhstan, and Tunisia. ISIS provided “free education” and a $100 stipend per month for each child. The children were indoctrinated through shari’a classes followed by training in basic weapons and soldiering.

The children had numerous uses for ISIS. While weaker, smaller, and less disciplined than adults, children served on the battlefield alongside adult ISIS soldiers as human shields. Others were also deployed as suicide bombers. For example, a 12-year-old ISIS member was martyred as a suicide bomber, killing 53 people at a Kurdish wedding in Turkey in 2016.

The children were also highlighted in a series of propaganda videos released over the internet to spread fear and increase the recruitment of foreign fighters. In some videos released online, children are shown in uniforms executing kneeling prisoners clothed in orange jumpsuits.

Most importantly, the children served as a way to perpetuate the extremist group’s ideology. ISIS indoctrinated these children as a long-term, strategic investment. Historically, the ISIS approach mirrored the Hitler Youth movement used by the Nazi Party during World War II.

While ISIS is now defeated on the battlefield, the caliphate’s online propaganda war continues to inspire foreigners to commit lone-wolf terrorist acts. Within Syria, ISIS followers are waging an underground insurgency. Most of the ISIS children are now living in refugee camps that have become hotbeds of radicalization. In Iraq, where criminal responsibility starts at the age of nine, dozens of children have been prosecuted for crimes, regardless of the fact that they were exploited.

Having seen death up close and personal, thousands of ISIS children are now physically and emotionally traumatized. Numerous training and rehabilitation programs have been started to tackle the immense challenge. Yet, with limited capacity in Iraq and Syria to provide specialized mental health care and deradicalization support, national security experts are concerned that the children remain a terrorism risk both in the region and internationally.

Left unchecked and without corrective steps by the international community, the next generation of terrorists will come from these confined “cubs” of the caliphate. It will become the fight our children will have to shoulder.

The first step toward mitigating the use of child soldiers globally is to work with the UN to have all recognized countries sign OPAC. Recognized state actors that continue to pay for or recruit children as soldiers must be sanctioned. The OPAC signatories must then put pressure on quasi-state actors, which invariably receive support from state actors. Advocacy groups should push for state actors to be shamed for their indirect support of child soldiers while governments should push for sanctions against them to force an end to their proxies’ exploitation of children.

Finally, a comprehensive oversight entity should triage multiple needs, channeling funding to the most pressing issues facing child soldiers, notably counseling, healing, and rehabilitating former child soldiers for their return to society. This will be a multi-year effort. Our patience needs to match the impact that combat imprints on the exploited youth of our world.

“If we are to teach real peace in this world, and if we are to carry on a real war against war, we shall have to begin with the children.”

Michael “Mick” Patrick Mulroy is a retired U.S. Marine, former Paramilitary Operations Officer in the CIA’s Special Activities Center, and a former Deputy Assistant Secretary of Defense for the Middle East. He is a Senior Fellow for National Security and Defense Policy with the Middle East Institute, an Analyst for ABC News, and the Co-founder of the Lobo Institute.

Eric Oehlerich is a retired U.S. Navy Commander (SEAL) from the Naval Special Warfare component of the USSOCOM’s Joint Special Operations Command. He is a Senior Fellow for Technology and National Security with the Middle East Institute, an Analyst for ABC News, and the Co-founder of the Lobo Institute.

Zack Baddorf is a national security and foreign policy professional focusing on researching disinformation and countering violent extremist propaganda. A veteran of the U.S. Navy, Baddorf has been a freelance journalist and filmmaker for more than 15 years, filing for The New York Times, BBC, and many other outlets. He is the executive director and co-founder of Military Veterans in Journalism and a senior advisor for the Lobo Institute. The views expressed in this piece are their own.