Between Security and Protection: The E.U'.s Refugee and Migration Policy Crisis 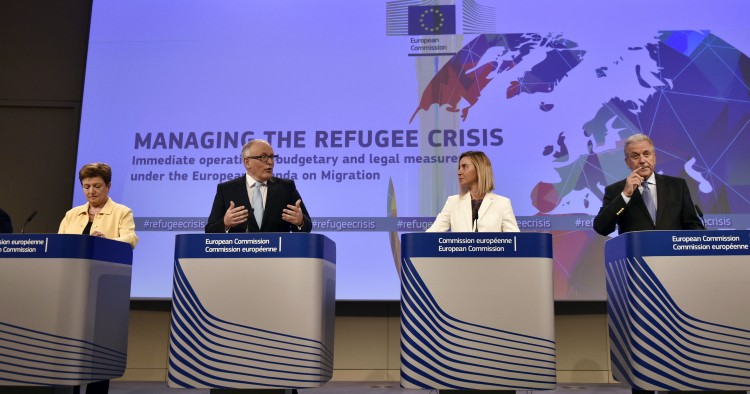 Instability, the rise in the numbers of migrant and refugee arrivals, and the frequent tragedies which have occurred in the Mediterranean Sea, have led to calls for changes in European Union migration and asylum policies. They have also highlighted a clash of interests both between member states and the European Union, as well as between the member states themselves.

These numbers are all the more tragic in connection with the resulting deaths in the Mediterranean Sea. Since the Lampedusa shipwreck in 2013, when 360 migrants lost their lives, the operations Mare Nostrum and Triton have contributed to the limitation of deaths at sea. The numbers, however, according to IOM, remain high: the total number of dead or missing migrants is 3279 in 2014 and 3770 in 2015.[4]

Eurostat registered an increase of 150 percent of asylum applicants in the third quarter of 2015 (in comparison with the same period in 2014[5]), originating from 149 countries. Germany, Sweden, Italy, and France are the countries where the majority of first instance asylum decisions were made in 2014 and 2015.[6] Hungary, where migration and asylum policies were highly debated in 2015,[7] registered an increase 13 of times the asylum applications in 2015 compared to the previous year.

The number of irregular migrants detected on the Eastern Mediterranean route reached unprecedented levels. A record number of 68,178 illegal border-crossings were reported from the EU’s external borders with Turkey, which represents an increase of over 380% compared with the previous quarter and more than 670% in relation to the same period of 2014.[9]

The debate on the real impact of those numbers is ongoing: although there has been a rise in migrant arrivals in recent years, it is possible to argue that this has not had, in absolute terms, a major impact on the total E.U. population. The data clearly shows that the number of third country nationals residing on European territory has not significantly increased.[10]

If the migrant crisis surpasses these numbers, the difficulties caused for member states and E.U. institutions will have stemmed from a widespread policy and managerial deficit of practical and forward thinking solutions. As Hein de Haas of Amsterdam University argues:

We are dealing with a grave humanitarian tragedy, that needs urgent addressing. Yet the idea that we are facing a biblical, uncontrollable exodus is sheer nonsense. This idea needs urgent correcting, because the panic and political fear-mongering about the issue works paralysing on efforts to find a practical solution to deal with the issue.[11]

Looking at the most recent literature and debates on the topic, it is possible to explain the crisis according to three key factors. The first factor is the humanitarian emergency—in place both in the sending countries and in the E.U. territory, especially at the most sensitive borders. The second factor is the appropriateness of both existing instruments and policy reform in migration and asylum matters. The third is a clash of interests between the union and member states and between single member states, which has even cast doubt on the E.U.’s founding principle, freedom of circulation.[12]

Since the Lisbon Treaty (2007), several changes to E.U. migration policy have been introduced.

Since the Lisbon Treaty (2007), several changes to E.U. migration policy have been introduced. With the entry into force of the Stockholm Programme (2010-2014)—the E.U. roadmap in the areas of freedom, security, and justice—migration has been recognized as a key priority area. The Stockholm program includes several actions in the areas of labor migration, promotion of rights, integration, the fight against illegal migration, and asylum issues. The emergency situation which has occurred over the last three years has highlighted the importance of taking action through an immediate response. In particular, the migration emergency has taught us the importance of addressing irregular migration and deaths at sea, finding a common understanding of asylum beyond that of the Dublin Regulation,[13] and promoting a better sharing of responsibility within the union.

The most recent policy document, the European Agenda on Migration, presented in May 2015, aims at a comprehensive approach in tackling migration issues, going beyond the strengthening of security measures enhancing the cooperation with third countries.[14]

The agenda is organized around four pillars:

In particular, provisions were made for the year 2016 for enforcement of sea rescue operations (Triton and Poseidon); the improvement of the relocation and resettlement system (50 million euros); and better development of partnerships with third countries of North Africa and the Horn of Africa. Furthermore, according to the action plan, the smuggling of migrants will be confronted through Common Security and Defense Policy (CSDP) operations in the Mediterranean Sea, led by Italy.[16]

The plan also introduces the system of hotspots which, “will concentrate on registration, identification, fingerprinting and debriefing of asylum seekers, as well as return operations. Those claiming asylum will be immediately channeled into an asylum procedure where EASO support teams will help to process asylum applications as quickly as possible.”[17]

Although the European Agenda on Migration and the linked measures are quite young, E.U. Commission data is clear on the difficulties in reaching the objectives in place.

For instance, the system of relocation has brought, by January 2016, very poor results: the most recent report produced by DG Home Affairs shows that, to date, the total number of relocations for both Italy and Greece is 272 refugees relocated out of 39,600 for Italy and 66,400 for Greece.

The Association for Legal Studies on Migration Issues (ASGI) has underlined in a recent document[18] that the policy declaration stated in the Agenda and the measures identified are not enough to set appropriate policies. For instance, as ASGI has stated, the possibility of access through legal channels in a context where the irregular access to a country is prevalent has not increased. The risk of this would be an ineffective fight against smuggling and criminal organizations, consequently resulting in a failure to reduce violence and the violation of human rights. Furthermore, the document does not foresee a common management of asylum issues, including a shared understanding of social and labor integration of protection seekers.

As Carrera and Lannoo[19] point out, beyond the single measures of the agenda, the main criticism are concerns about the fact that the E.U. policy framework reveals a general lack of scope and ambition. The inadequacy of the Dublin regime, together with a general failure of the measures of first reception in Italy, Greece, and Hungary has generated a widespread deficiency of mutual trust among the actors. Furthermore, as the authors state, the attention toward the contingency and its most visible effects has diverted attention from the root causes of the crisis, and does not rely on a E.U.-wide obligation system of shared responsibilities.

The recent measures outlined by President Jean-Claude Juncker of the European Commission, continue Carrera and Lannoo, are aimed to better address the challenge of the humanitarian crisis, but did not gain the support of a majority of member states. In a climate of mistrust, member states have preferred to act individually with several derogations to international treaties, raising a clash of policy interests with the Commission.

As in other policy areas, such as external action or crisis management—likewise for migration policies—the E.U. institutions and single member states have huge difficulties in solving collective action problems within an intergovernmental framework. This is due to the lack of a comprehensive understanding of single member states’ capacities framed in cooperative context, and of the tendency to maintain sovereignty on migration issues.

It is particularly significant, looking at the German attitude, with the decision taken by Chancellor Angela Merkel to derogate the Dublin Regulation at the end of August 2015, followed by a fast reconsideration. Furthermore, countries such as Sweden, Spain, United Kingdom, Austria, and Slovenia are slowly disproving the E.U. agenda with extraordinary measures such as strict border controls, derogation to asylum regulations and building fences (Ceuta and Melilla, Spain).[20] The most recent proposal of the Luxembourg E.U. Presidency to introduce the possibility to derogate to Schengen in case of emergency is an additional confirmation of the lack of strength of the Commission Agenda.

In this context, Hungary has been revealed to be the strongest opposition to the European Union’s refugees’ policy and the leading voice of the Eastern European Union side. The ‘Hungary fences,’ built to close the borders of Croatia and Serbia, are the most well know and explicative element of the country’s attitude.

A recent article by Péter Szijjártó, Hungarian Minister of Foreign Affairs and Trade, clearly explains governments’ positions and the contrast with E.U. Commission understanding of the crisis:

In Europe, many people refer to this challenge as a “refugee crisis,” but that is simply untrue. What we face today is not a refugee crisis. It is a case of mass migration […] The EU has been talking about a European solution. Unfortunately, there isn’t any such thing. Had there been a solution, this figure would not have been increasing. Currently there are 6–12,000 irregular migrants entering the territory of Greece on a daily basis and setting off across the Western Balkans. This figure is not decreasing as there is no successful common European response to this development.[21]

It is evident that the limited effectiveness of policies, together with the mistrust among member states, is weakening the possibility of concrete action which, in the respect of human rights and human dignity, would be able to address the root causes of migration and enforce the system of protection. A joint evaluation of the single actions, together with the identification of shared responsibilities, would enable the European Union to overcome the gaps separating individual states, consequently providing the means for building a harmonized system of protection and security supported with adequate resources.[22]

[2] According to UNHCR data, as of December 21, 2015, 972,500 persons have crossed the Mediterranean Sea. In addition, the International Organization for Migration (IOM) estimates that, up to that time, 34,000 people had crossed the borders between Turkey and Bulgaria and Turkey and Greece.

[13] The Dublin Regulation is a European Union (EU) law that determines the Member State responsible for examining an application for asylum for persons seeking international protection under the Geneva Convention and the EU’s Qualification Directive.