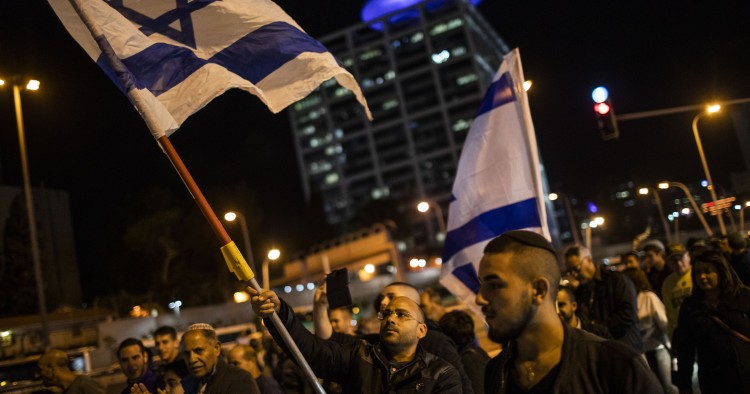 On July 7, 2014, seven Hamas militants were killed in an Israeli airstrike on the Gaza Strip. Thereafter, Hamas launched an all-out assault on Israel, striking targets north of Tel Aviv with rockets and infiltrating Israel with armed divers and via tunnels. On Nov. 12, 2018, seven militants were killed during an Israeli covert operation gone awry in Gaza. In the aftermath of that incident, Palestinian armed groups launched 460 rockets and mortars toward Israel, and in return Israeli airstrikes hit 160 targets in the Strip. Seven Palestinians were killed by the Israeli strikes in Gaza, along with one Palestinian from the West Bank who was hit when a Palestinian rocket struck the Israeli city of Ashkelon.

The fighting stopped, however, on the evening of Nov. 13, when the “joint operations room” of Palestinian armed groups in Gaza announced a ceasefire. Given the similarities between the run-up to the 2014 Israel-Gaza war and current conditions in Gaza, it is worth exploring why the latest round of fighting did not escalate further––and what this may mean for the future.

Three principal factors drove Hamas to war in 2014: First, the closure of smuggling tunnels under the Egyptian border had precipitated an economic crisis in Gaza; second, the kidnapping and killing of three Israeli teenagers on the West Bank had prompted a massive Israeli crackdown on Hamas’s West Bank infrastructure; and third, in the months before the war Hamas had made major concessions to their Palestinian Authority rivals in the West Bank, only to see President Mahmoud Abbas renege on what they believed was a commitment to pay government salaries in Gaza. With their backs to a wall, Hamas decided to escalate militarily, hoping a war would generate sympathy for their position.

Throughout much of 2018 Hamas has been similarly cornered in Gaza. Despite significant concessions from Hamas, a reconciliation process with their Fatah rivals had faltered by March 2018, after an assassination attempt on the Palestinian prime minister. Economic conditions in the territory have never been worse. Starting in the spring of 2017, President Abbas imposed a series of punitive economic measures targeting Gaza. This pushed the unemployment rate to an unprecedented 53 percent, with 53 percent of the population living in poverty. Gaza’s borders with Israel and Egypt have remained largely closed for years. While the movement of people between Gaza and Israel has been increasingly restricted since the early 1990s, the closure of the last decade has prohibited the shipment of a vast range of commercial products in and out of Gaza, crippling the local economy.

But instead of going to war, Hamas came to support a series of popular demonstrations on the Israeli border with Gaza, organized by civil society activists. And now, despite the provocation of an Israeli operation deep inside Palestinian territory, Palestinians kept their rocket and mortar attacks focused on southern Israel, and no cross-border incursions were carried out. This is not to minimize Palestinian attacks targeting Israeli civilians; rather it is to note that militants in Gaza were cautious and did not escalate the situation.

Hamas has at least four reasons to avoid war. First, negotiations with Egypt, along with financial support from Qatar, have finally yielded some improvement on the ground. This month, Qatari funds started coming into Gaza to pay salaries for some civil servants. Qatari-funded fuel is also coming into Gaza’s power plant, increasing the electricity supply to an average of 11 hours per day. Second, rearming after another war would be challenging and costly. In recent years Hamas has worked hard to improve relations with Cairo. As part of this process, the Islamist organization was forced to crack down on the movement of people and weapons between Gaza and Egypt. Attempting to rearm after a war would again implicate Hamas in the Sinai insurgency, jeopardizing relations with Cairo. Third, Hamas knows that the outcome of another war is highly uncertain. When the dust settled after the 2014 war, Hamas’s strategic position was no better than before it started, yet Gaza was in ruins. Fourth, and perhaps most importantly, there is little public support in Gaza for a return to war. In an interview with the author on Nov. 17, former Hamas Health Minister Bassem Naim was explicit that “people are totally against a new war.” They have “great respect … for Hamas, because they see Hamas fighting to avoid a new war.”

That said, the situation remains precarious. The calm between Israel and Gaza is based on unwritten “understandings.” Hamas officials and independent analysts consulted by the author in recent days have emphasized that the Qatari payments coming into Gaza are supposed to be part of a six-month confidence-building phase. Within six months, long-overdue work on key infrastructure projects, to improve the water and electricity supply, should be underway (back in September, the donor coordinating group for Palestine approved a series of UN-backed infrastructure projects for Gaza). However, Israel has a history of stymying these initiatives, citing security concerns that block the import of components needed to carry them out. Protests on the Israel-Gaza border are continuing to generate Palestinian casualties. Should a Palestinian rocket cause significant Israeli casualties, or as Hamas officials warned in conversations with the author on Nov. 17, should Israel kill any senior Hamas leaders, a wider war is a significant possibility.

The latest Gaza-Israel ceasefire also has been unpopular in Israel, with protestors burning tires in communities near Gaza. Seventy-four percent of the Israeli public is dissatisfied with the prime minister’s handling of the issue, and polling suggests his Likud faction would now garner 29 seats in the Israeli Knesset, its lowest standing since March. In a Nov. 14 interview conducted by the author, Israeli analyst and public opinion expert Dahlia Scheindlin warned that the debate in Israel regarding Gaza is not supportive of compromise––with an attitude of “be tough or be tougher”––and Prime Minister Netanyahu is “not immune to public pressure.” For its part, Hamas has warned Israel against reversing support for the Egyptian/Qatari measures. A Hamas source told the Lebanese daily Al-Akhbar that this “would be a declaration of war and our response will be strong and more intense than previously.”

However, Israeli Prime Minister Benjamin Netanyahu also has been working to avoid an escalation. And, as of Nov. 19, with Education Minister Naftali Bennett’s faction remaining in the government, Prime Minister Netanyahu insisted that his government would have another year before elections. This, in turn, may lessen pressure on Netanyahu to take a hard line on Gaza.

The Egyptian/Qatari initiative has afforded breathing room for Gaza, while Hamas and Prime Minister Netanyahu have demonstrated a determination to avoid war, for now. The international community should build on this window of opportunity, supporting a more comprehensive ceasefire that addresses Gaza’s underlying need for freedom of movement and creates a horizon for political reunification with the West Bank and Palestinian self-determination.

Progress in Gaza is rare and often fleeting, and the threat of a wider conflict is ever-present. Failure to capitalize on this limited momentum could see the parties slide back to war.