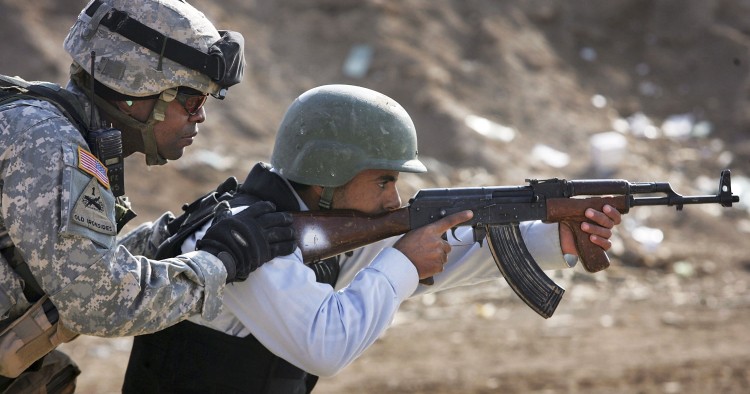 The erosion of U.S. global hegemony in recent years is rarely a matter of dispute among American strategists. The United States has lost its preeminence in part because others, most notably China, have caught up, but also because it has overextended and exhausted itself abroad, leading to budget constraints, rightist populism, and acute political polarization at home.

Washington might be able to gradually slow its decline by responsibly reducing its expansive security responsibilities around the world---something President Donald Trump would no doubt relish---while pushing and enabling its allies and partners to step up. This is a tall order and a delicate balance, one the United States has been trying to achieve for the past quarter of a century. One vehicle that is well suited to help the United States address this strategic challenge is security cooperation, defined as all activities conducted by the Department of Defense aimed at enhancing the capability and willingness of U.S. allies and partners to operate in coalition with, or in lieu of, U.S. military forces in response to shared security threats.

Trump’s peculiar view of America’s international alliances notwithstanding, there is an enduring and bipartisan consensus in Washington on the importance of working more closely with allies and partners. This priority has been codified for decades in almost every high-level security document published by the U.S. government. In fact, so much emphasis has been placed lately on helping build the military capacity of U.S. partners to share the costs of global security that it has become a staple of American strategic discourse and the sine qua non of U.S. strategy moving forward.

But agreement across U.S. government agencies on the need to better communicate and interoperate with partners is altogether different from having a sustainable and reliable system for security cooperation in place that can more effectively leverage America’s extensive web of alliances and partnerships around the globe. Years of research of international security policy in the Middle East and an experience in 2018-19 as a Senior Advisor for Security Cooperation in the Pentagon’s Office of the Secretary of Defense for Policy have led me to believe that this system has yet to exist.

It is convenient, and in many cases, justifiable, to assign blame to U.S. partners for the deficiencies of security cooperation, including their hesitancy to take on more responsibilities and their failure to spend more on defense to improve military capabilities. But the unpopular truth is that a major ailment of security cooperation is internal to the United States. This sizeable and exponentially growing enterprise is malfunctioning because the U.S. house has been in great disorder since the end of the Cold War. If foreign policy starts at home, so does security cooperation.

The key actors involved in security cooperation—the White House, Congress, Department of Defense, and Department of State—do not have a unified understanding of security cooperation: what it’s supposed to achieve, how to use and improve it, and how to tell if it’s working. Moreover, they have failed to coordinate their efforts on various matters including oversight and accountability. Security cooperation relies on bureaucratic partnerships. Yet, these partnerships are broken, and the enterprise is awfully stove-piped as a result of anemic leadership.

What is promising is that more American officials and legislators now recognize the deep and endemic challenges of getting security cooperation right. What is less encouraging, however, is that it will take nothing short of a dramatic culture change across the interagency to fully implement the sweeping and monumental security cooperation reforms that Congress called for in the Fiscal Year 2017 National Defense Authorization Act (FY17 NDAA). And culture changes, especially within the Defense Department, do not happen overnight.