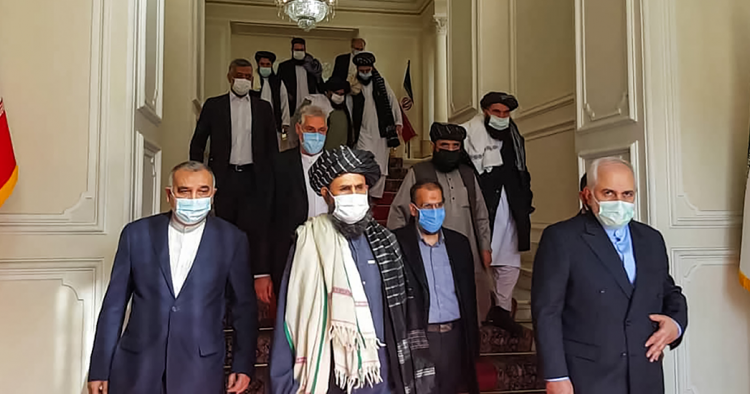 This is the second part of a two-part series. The first part is available here.

In the years leading up to the U.S. invasion of Afghanistan, the Taliban had strained relations with Iran. Tensions between the two sides escalated to the point that the Iranian government and the Quds Force actually assisted American forces during the 2001 U.S.-led invasion.

Part of this cooperation was rooted in the enmity between Iran and the Taliban at that time, and part was rooted in Tehran's fear of a confrontation with the United States in the months following the attacks of 9/11, especially considering that Washington would view Iran's non-cooperation as a hostile act. However, after Iran was branded part of the "axis of evil" and the subsequent invasion of Iraq by American forces, Tehran's strategy in the region gradually changed. The basis of the new strategy was that if the Americans were tranquil on Iran's eastern and western borders, they might put an invasion of the country on the agenda. To prevent this from happening, the Quds Force was determined to help anti-American militia forces cause problems for and ramp up pressure on U.S. troops in Iraq and, to a lesser extent, Afghanistan. This strategy found more advocates within the Iranian regime when Mahmoud Ahmadinejad became president in 2005.

Following the rise of Islamic State-Khorasan Province (ISKP) in Afghanistan in 2015, Tehran found another justification to cooperate with the Taliban: containing ISKP jihadists whom Iran viewed as a threat against its borders. Following this cooperation, Taliban Spokesman Zabihullah Mujahid was quoted in July 2016 as saying that the group was "establishing new relations with Tehran."

In late 2018, Iran acknowledged for the first time that it was hosting Taliban envoys for bilateral talks. Tehran, however, stressed that the Afghan government was aware of the meeting and that the purpose of the talks was to "resolve security problems in Afghanistan." In late January 2021, another delegation of the Taliban, led by Mullah Baradar Akhund, political deputy and chief of the Taliban’s diplomatic office in Qatar, went to Tehran, which was widely reported in Iranian media.

The most recent official visit of a high-ranking Taliban delegation to Tehran took place on July 7, 2021, when they were hosted at a meeting organized by the Ministry of Foreign Affairs on the future of Afghanistan. According to the Foreign Ministry, in addition to the Taliban, three other Afghan delegations, including a few Kabul officials, were also present at the talks.

The recent official negotiations between Iran and the Taliban, initiated by Hassan Rouhani's administration, were followed by the approval of the U.S. and Afghan governments. In fact, after the Taliban delegation's visit to Tehran, U.S. State Department Spokesman Ned Price said, "What Iran is trying to do, or is in the process of trying to do by hosting this meeting, may well be constructive." At the same time, the Afghan Ministry of Foreign Affairs welcomed the outcome of the meeting between Afghan politicians and Taliban representatives in Tehran.

But apart from formal diplomatic relations — which are also likely to continue under Ebrahim Raisi's administration — the most important relations between Iran and the Taliban have always been unofficial, i.e. through the Islamic Revolutionary Guard Corps’ (IRGC) Quds Force. These relations have been criticized by both American and Afghan authorities.

The IRGC-Taliban ties have repeatedly made headlines in recent years, especially due to various reports on the unofficial presence of the group's commanders in Iran. The most controversial report came when Mullah Akhtar Mohammad Mansour, the then-leader of the Taliban, was killed in a U.S. drone strike in May 2016, when he had just returned to Pakistan from Iran. In November 2020, the New York Times even published a report stating that Israeli intelligence forces had assassinated Abu Muhammad al-Masri in Tehran, one of the main suspects in the bombings of the U.S. embassies in Kenya and Tanzania. Al-Masri was viewed as a senior al-Qaeda member and the group's second-in-command.

Given the bilateral relations, it was no surprise that on January 5, 2020, the Taliban issued a statement condemning the assassination of Qassem Soleimani, the then-commander of the Quds Force, by "savage American forces," warning about the consequences.

At the end of the same year in an interview with the Afghan TV network TOLO News, Mohammad Javad Zarif made a complicated comment apparently meant to relieve the Foreign Ministry of responsibility for the IRGC's relations with the Taliban. In response to the question of whether he was aware of the existence of the "Mashhad Council" and the "Zahedan Council" of the Taliban (Mashhad and Zahedan are the capitals of the two major border provinces of Iran), Zarif said, "I do not know. People who have ties to the Taliban may travel to Iran."

In the past few years, Tehran’s development of official relations with the Taliban has met with very little opposition within Iran. According to a wide range of figures from different political factions, when the Taliban are recognized by the United States and official talks are held between them, Tehran should also negotiate with the group in order to protect its national interests. These figures emphasize that after the withdrawal of U.S. troops, the Taliban will probably gain the upper hand in Afghanistan, and neighboring countries will need to reach agreements with them on various issues.

Nevertheless, in recent years there has been disagreement within Iranian political circles over the non-transparent relations between the IRGC and the Taliban, which have been aimed at uniting to confront a common enemy, the United States. This disagreement became more evident in recent weeks, following the controversial media support of IRGC associates for the Taliban.

It is evident that the IRGC-linked media outlets, in line with Ayatollah Ali Khamenei's position, consider the withdrawal of American troops from Afghanistan a strategic victory for Tehran.

However, the Taliban, despite years of relations with the Islamic Republic, are not controlled by Iran. In fact, unlike Tehran’s Shiite proxies in neighboring countries, the Taliban have other foreign backers too. In particular, according to the Afghan government and President Ashraf Ghani, this group has been mainly supported by Pakistan. As a result, Iranian officials cannot be sure that the Taliban will necessarily coordinate their policies with Tehran after the withdrawal of U.S. troops from Afghanistan.

The Taliban's military operations in Afghanistan have undoubtedly led to the killing and displacement of an increasing number of Afghan Shiites. Continuation of this situation in the long run will create inevitable tensions between the Islamic Republic and certain Shiite communities in the region (which Tehran is counting on to support its regional projects). The escalation of the civil war in Afghanistan will also make Iran's eastern borders insecure and may result in a new wave of migration of Afghan refugees, further straining the Islamic Republic's already troubled economy.

Given all these complex factors, the withdrawal of U.S. troops from Afghanistan is likely to mark a new chapter in Taliban-IRGC relations by eliminating their mutual need for each other.

It is too early to tell how this will affect the nature of the relationship between the two groups in the future. But whatever the future relationship, it may be difficult for the IRGC to continue its honeymoon with the Taliban in the long term.

Marie Abdi is an Iranian political researcher focusing on the Islamic Republic's domestic and regional strategies.The views expressed in this piece are her own.