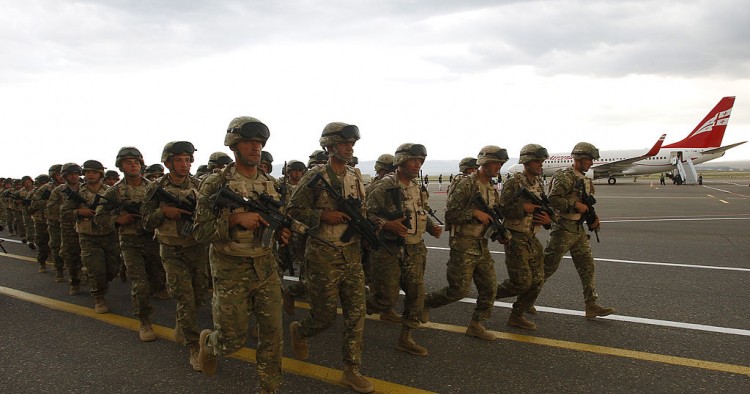 For years, politics and conflicts in the Middle East have spilled over into many other regions of the world. Refugee crises, terrorism, and political instability in the Middle East have impacted foreign and domestic policy and politics in North America and Europe. These parts of the world are thousands of miles away from Baghdad, Jerusalem, Damascus, and other Middle Eastern capitals, but the southern tip of Europe, the Caucasus, is much closer and, therefore, a particularly important case for policymakers in Washington and Brussels. Its proximity to the Middle East as well as the strong economic, and in some cases historical, ties between the two regions, mean it is likely that the Caucasus, in the future, will be both more pertinent to and more affected by Western policy in the Middle East.

Because the South Caucasus is just north of the Middle East, south of Russia, and east of Turkey, it is unavoidable that a changing Middle East will impact it as well. Moreover, the three countries in this region — Azerbaijan, Armenia, and Georgia — have differing positions with regard to the Middle East and the U.S.

Azerbaijan remains close with Turkey and is concerned about the large ethnic Azeri population in Iran. Nonetheless, because it still has some of the largest oil reserves outside of Russia and the Middle East itself, as well as its own concerns about jihadist terror, Azerbaijan has interests and resources that overlap with many Western countries.

Armenia is trying to shake off its previous incarnation as almost a Russian client, something that a smart Western strategy could use to help balance Russia’s growing influence in the Middle East. In recent years, Armenia has begun to welcome refugees from Syria, Iraq, and elsewhere. Although the numbers are still relatively small, they will likely grow in the future as people continue to flee the seemingly endless wars in the Middle East. Thus far, these refugees have not had a significant impact on political life in the region, but that could change.

Georgia, for its part, has long supported Western, specifically American, interests in the Middle East — including by sending troops to fight alongside Americans in Iraq while remaining a staunch ally of Israel as well. Georgia is also the most Western-oriented country in the region. While its stop-and-go struggle to consolidate its democracy is frustrating for many, Georgia still remains much more democratic and free than neighboring countries in the region and in most of the Middle East.

Over the past 20 years, one of the most extraordinary, if underreported, developments in the region is that war, instability, and conflict in the Middle East — in Iraq, Syria, and elsewhere — have not spilled over into the South Caucasus. To a great extent this is the Caucasian dog that did not bark, but to assume that good fortune will remain the case, and to be unprepared for when it changes, would be a mistake.

Georgia’s continued support for Israel and for U.S. foreign policy could easily make it a greater target of Islamist terrorism originating in the Middle East, which would be an unfortunate fate for a country that is largely free of the anti-Semitism that poisons many of its neighbors. Additionally, as Turkish President Recep Tayyip Erdogan’s regime becomes more authoritarian and moves further away from the West, that could also lead to instability that could easily spill over into the Caucasus. Similarly, instability in Iran, or escalation of existing U.S.-Iran tensions, could lead ethnic Azeris in Iran to flee to the north, creating strains on Azerbaijan. There are no guarantees that any of these or numerous other possible scenarios will come to pass, but there are also no guarantees that they will be avoided either.

Assuming that conflicts and tensions in the Middle East will continue to somehow skip over the Caucasus is not a strategy, and reflects a lack of preparation that could easily come back to haunt the West. Accordingly, it is essential to explore how Middle East policy can affect the Caucasus, and to include the countries of the region in policy-making for the Middle East. To some extent this happens already. For example, U.S. military interests in Georgia have always had at least one eye on the country’s proximity to Iran and other parts of the Middle East.

Despite the potential for conflicts in the Middle East to influence politics in the Caucasus, there are also ways the Caucasus can constructively engage in the Middle East. Investments from various Middle Eastern countries, including the Gulf states and Israel, have already helped the economic development of Georgia. Similarly, by maintaining strong ties throughout the region, Georgia has become a place where Arab, Iranian, and Israeli tourists and businesspeople interact and have the opportunity to build relationships. This can be seen and heard, for example, in the Black Sea port city of Batumi, where Arabic, Farsi, and Hebrew are spoken in restaurants, on the boardwalk, and in hotel lobbies.

Lincoln Mitchell is a political analyst, pundit and writer based in New York City and San Francisco. Lincoln works on democracy and governance related issues in the former Soviet Union, Eastern Europe, the Caribbean, the Middle East, Africa, and Asia. Follow Lincoln on Twitter @lincolnmitchell.​​​​ The opinions expressed in this article are his own.

Balance in the Black Sea: The complex dynamic between Turkey, Russia, and NATO