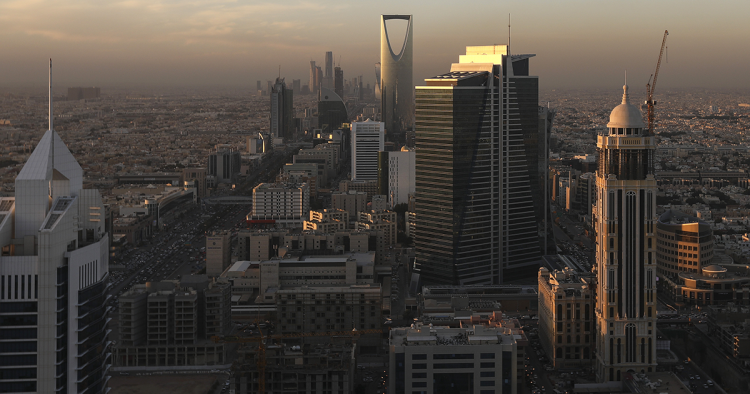 While Western banks saw their valuations drop substantially during the first 18 months of the COVID pandemic — and have yet to recover — the declines among Saudi banks have been smaller and their valuations are now closer to, if not above, their pre-pandemic levels. Identifying the drivers of this seemingly contradictory trend helps us better understand the shifts within the Saudi banking sector and the growing impacts of policies related to Vision 2030, the country’s long-term economic development and diversification program.

In 2020 NCB, Saudi Arabia’s largest bank, had its most profitable year to date, achieving a net operating revenue of SAR21.5 billion ($5.3 billion). This was driven by a 99% increase in the bank’s residential finance portfolio, resulting in a net increase in income of 7% in its retail banking operation. This was surpassed by the bank’s treasury operation, which saw a 20% rise in net income, driven by the issuance of Saudi government sukuks — sharia-compliant bonds. Similar trends can be seen throughout the Saudi banking sector, where the main areas of growth have been residential mortgages, increased corporate lending, and lending to the state, in descending order of importance. Al-Rajhi Bank saw mortgages rise by 90% in 2020, while Saudi Investment Bank emphasized the importance of a reduction in tax from 15% to 5% for retail property buyers to spur housing demand. Numbers from the Saudi Central Bank (SAMA) show that residential mortgage finance (houses, apartments, and land) contracts have increased by a factor of 17 since 2016. This extraordinary growth is fuelled by initiatives from the Ministry of Housing and the Real Estate Development Fund (REDF), which are at the tip of the spear of Crown Prince Mohammed bin Salman’s ambitious goal of ensuring 70% homeownership by 2030.

Next to housing, the kingdom’s banks highlight two other points of focus. The first of these is growing small and medium-sized enterprise (SME) funding opportunities through the Kafalah program, which has expanded rapidly: from 958 projects funded in 2018 to over 3,500 in the first three quarters of 2020. Al-Rajhi’s SME portfolio grew from SAR23 billion in 2019 to SAR29 billion in 2020, a rise of 26%. Across the sector, micro and SME (MSME) financing has almost doubled since 2018. The second area of focus is increasing digitization with the dual purpose of boosting penetration and moving toward a cashless economy. This development relates closely to SME financing, as banks hope to grow SME access through better digital systems. Throughout the sector, around 80% of new accounts are being opened digitally, and 30-50% of transactions have become fully digital.

This move toward digitalization is most clear in the granting of licenses to the two first fully digital banks in Saudi Arabia earlier this year: Saudi Telecom’s STC Pay will be renamed STC Bank with a capital of SAR2.5 billion and Saudi Digital Bank (SDB) will have a capital of SAR1.5 billion. These new licenses embody the kingdom’s desire to become a financial hub and increase the efficiency and penetration of its banking system. The impact of these digital banks is hard to gauge, but it is safe to assume that they will be appealing for the underbanked areas of Saudi Arabia, where established banks have few or no branches. With bank penetration at 72%, but internet penetration forecast to reach 97% in 2025, the digital banks have a clear target audience. Their sector-wide significance will likely come from spurring innovation among the kingdom’s older banks and ensuring Saudi society is at the forefront of advancements within the (digital) financial system. STC Pay and SDB will fall under the same regulatory framework as other Saudi banks, though the governor of SAMA has said there will be additional supervision to combat the risk of terrorist financing and money laundering.

Saudi Arabia has also granted a number of banking licenses to foreign banks over the last decade, among them QNB, Credit Suisse, and ICBC — which will soon be joined by a second Chinese bank, Bank of China (BOC) — while Citibank and Goldman Sachs have capital market licenses. These foreign banks combined hold less than 1% of total assets in the kingdom and will not become competitors of the Saudi banks; instead, they focus on financing megaprojects, custody and clearing, and serving as agents between international companies and Saudi actors. The licensing of foreign banks has been organized to ensure geographical spread and representation among important partners: JPMorgan Chase from the United States, ICBC and BOC from China, National Bank of Pakistan from Pakistan, MUFG from Japan, and Emirates NBD and First Abu Dhabi Bank from the UAE. These banks are important players in the privatization drive, including of pipelines, flour mills, hospitals, and airports.

In addition to arranging and underwriting activities, foreign banks are also strongly encouraged to help train Saudis to increase Saudization, another important goal of Vision 2030. Saudi Aramco, together with a host of banks and accounting companies, including HSBC and Deloitte, launched the Altamayyuz Finance and Accounting Excellence Academy, a first-of-its-kind project that aims to create a highly-skilled pool of Saudi graduates that will help the kingdom succeed in its diversification  programs and ensure that it has the expertise and manpower necessary to make it a regional financial services hub.

The banks’ role in Vision 2030 cannot be overstated: They are central players in attracting foreign direct investment and facilitating economic diversification, they symbolize the more outward-looking policies of the crown prince, and they are at the forefront of changing how citizens, companies, and the state interact with each other. Questions do remain regarding their capacity for independent action, however. Saudi banks’ notable profitability was founded on government initiatives and spending from the REDF, while the Kafalah program is funded by the Saudi Industrial Development Fund. Encouraging Saudization, MSME growth, and homeownership are all integral to the continued success of Vision 2030, but the sustainability of these projects is uncertain once government funding is reduced. The focus on Riyadh also limits growth in the rest of the country: The capital region receives well over a third of SME funding despite having less than a quarter of the population, and forcing companies to put their headquarters there limits their reach, especially for banks.

Piotr Schulkes is a non-resident scholar at the Middle East Institute. His research concerns the political economy of the Gulf, focusing on the region's financial sectors. The opinions expressed in this piece are his own.