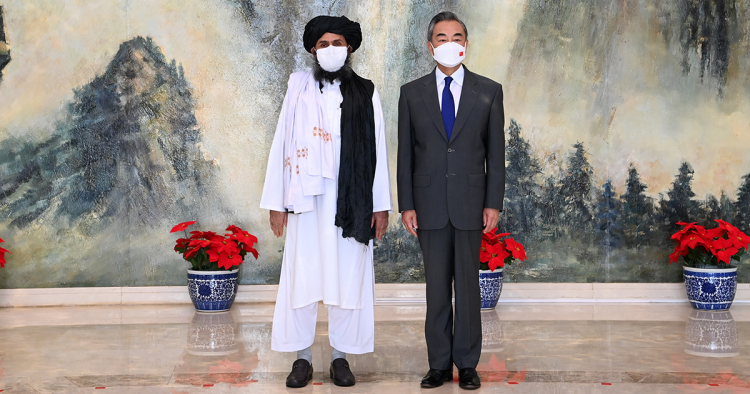 Despite the loss of crucial foreign aid, a deepening food crisis, and a sinking economy, little attention has been given to the effects of Afghanistan’s current political instability on the Taliban’s international relations. The international community has certainly taken an interest in Afghanistan, urging the Taliban to implement reforms, such as political representation for all Afghan ethnicities and respect for women’s rights, particularly when it comes to education and work. For its part, however, China has not let such concerns get in the way of establishing strong ties with the Afghan Taliban.

On March 30-31, China will host the foreign ministers of Afghanistan’s neighboring countries as part of a meeting that will include the participation of a Taliban delegation. The stated aim of the Beijing-hosted dialogue is to discuss the economic and humanitarian crises in Afghanistan. The real motive, however, is to confer greater legitimacy on the Afghan Taliban as Beijing is likely to use this meeting to try to convince foreign ministers to start officially engaging with them. Continuing economic and political engagement with and appeasement of the Taliban have defined the policies of China, as well as its allies Pakistan and Russia, much to the detriment of the Afghan people.

The situation in Afghanistan has become extremely dire, with Afghans in desperate need of food, medical supplies, and cash. In late February, the Biden administration decided to relax the sanctions that had collapsed the Afghan economy. But critics found these measures wanting. China, for one, has been calling on the U.S. to unfreeze Afghan assets and remove all sanctions. Despite disagreements over how to approach Afghanistan, China and the U.S. both voted in favor of the U.N. Security Council’s resolution on March 17 to renew the mandate of the U.N. Assistance Mission in Afghanistan (UNAMA), which is likely to bring much-needed relief.

China has a number of economic, political, and security interests in Afghanistan. On the security front, Beijing faces threats from militant groups it has branded as terrorist organizations that are believed to be operating from Afghan territory. Most prominent among these is the East Turkestan Islamic Movement (ETIM), an extremist Uyghur separatist group which the Taliban claims to have driven out from Afghan-Chinese border regions. As for Beijing’s economic interests, Chinese companies have inked contracts to extract copper from the Mes Aynak mine and oil from fields in the Amu Darya basin of the northern provinces of Faryab and Sari Pul. These projects have both been stalled for over a decade due to political instability. Persistent political uncertainty and the universal non-recognition of the Taliban regime have made things difficult for Beijing. China is keen to incorporate Afghanistan into the Belt and Road Initiative (BRI), its global infrastructure development scheme, a mission that will be made easier if the Taliban is generally seen as legitimate. As far as the Afghan Taliban is concerned, international legitimacy is vital to their attempts to build a viable state, a cohesive political community, and a functioning economy; their current international standing is anathema to them. The Taliban want China to shore up their international legitimacy and provide assistance for the task of national reconstruction in Afghanistan.

In order to secure its myriad interests, China needs a stable Afghanistan. For President Xi Jinping, stability ranks as the supreme political value. President Xi sees stability at home as the key to a third term in office and stability abroad as a means of facilitating Chinese investment. That is why Beijing had begun to scale up its engagement with the Taliban even before the U.S. withdrawal. Chinese Foreign Minister Wang Yi went as far as to host a Taliban delegation led by Mullah Abdul Ghani Baradar in July 2021. Though China has been wary of the Taliban’s success for fear of its demonstration effect on Islamism across the region, it nonetheless believes that only the Taliban can mobilize the resources to command nation-wide legitimacy and eventually assemble something akin to a functioning government. Beijing hopes that an internationally recognized Taliban regime can be persuaded to act as a counter-insurgency force against ISIS, ETIM, and other terrorist groups inimical to Chinese interests. The Taliban already made a commitment — arguably broken — to counterterrorism through the 2020 Doha Accords, which paved the way for the U.S. troop withdrawal. Despite Chinese hopes, ensuring stability and order in Afghanistan is easier said than done. No external intervention has been able to achieve this objective, earning Afghanistan the sobriquet “the graveyard of empires.” But now, in the wake of Russian President Vladimir Putin’s brazen invasion of a neighboring sovereign country, great power competition is only intensifying. As Ukraine bleeds and a second Cold War dawns, the world is set to witness an increasing weaponization of trade and aid — a trend by which Afghanistan is bound to be affected.

China has often portrayed the American failure to stabilize Afghanistan as a debacle for the West’s governing paradigm. Besides economic and security interests, a major Chinese objective is to impose its own model of governance on Afghanistan. If Beijing achieves even a modicum of success in stabilizing Afghanistan and helps the Taliban to manage their economic problems, the communist rulers of China will have scored a huge propaganda victory.

China’s influence is considerable, but mostly transactional. While American influence continues to decline, the Western democratic model will remain attractive despite its bloodied nose. The Afghan people have embarked on some laudable, albeit imperfect, experiments in democratic institution building over the last 20 years. These Afghans look to the West for help in resisting the Taliban’s autocratic impulses and theocratic policies. Beijing, meanwhile, has no genuine interest in promoting the rule of law, participatory forms of decision-making, or sustainable development.

The question of who is able to exert influence in Afghanistan is tied to the larger puzzle of whether the world order will be bipolar or multipolar in nature. China has many allies, Russia chief among them, but Putin’s Russia has demonstrated an uncanny knack for creating trouble and making friends with pariah regimes. Since its Ukrainian gambit, Moscow has been left with exceedingly few allies. Maintaining its newfound influence in Afghanistan is going to be costly, and expanding it even costlier under the weight of Western sanctions.

Increasingly isolated, Russia was the only abstention in the latest U.N. Security Council resolution spelling out the new one-year mandate for UNAMA. Because Moscow obstructed the draft, decrying — like China — its overemphasis on human rights, the resolution was redrafted to account for these concerns. China approved the redrafted version, while Russia did not. Explaining his country’s stand, Russian Ambassador to the U.N. Vassily A. Nebenzia noted that Moscow had no option but to abstain because no attempts were made to secure consent from the “host country” (the Taliban regime) for a U.N. presence. Beijing echoed the Russian narrative, sounding a cautionary note over the range of the international community’s expectations from the Taliban. Chinese Ambassador to the U.N. Zhang Jun expressed “many doubts” regarding the tasks laid out in UNAMA’s mandate and argued for more “flexibility” in dealing with the situation — a euphemism for prioritizing economic recovery over human rights concerns, an approach that suits China’s ideological preferences.

Whatever the outcome of the upcoming foreign ministers’ meeting in Beijing, there should be no doubt that political disagreements will mar China’s discussions with Western countries on the issue of the Taliban’s possible reintegration into the global system. China might not countenance the concessions that the West is likely to demand from the Taliban in exchange for its recognition of the current regime in Afghanistan, but the brutal trampling of Ukraine has pushed the protection of democracy to the forefront of international relations, so the West will hold fast to its demands.