China’s Economic Stabilization Efforts in Afghanistan: A New Party to the Table? 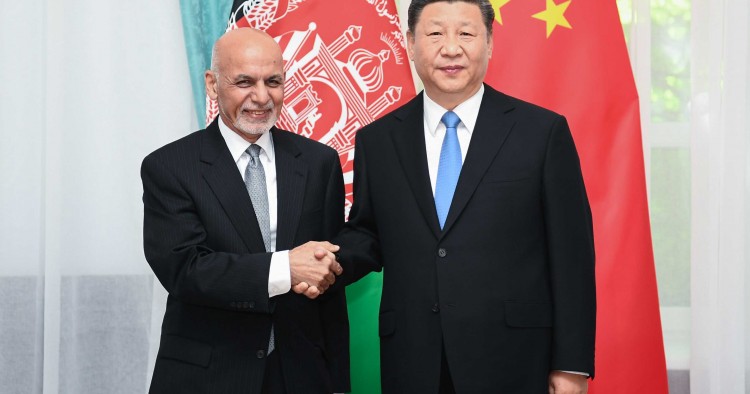 Economic development as a key to a country’s stabilization has been one of the cardinal principles guiding China’s international engagement. In December 2019, during his first public appearance as a Chinese representative for European affairs, Wu Hongbo outlined the Chinese perception of the security-development nexus, stating, ‘‘with local development, the local security situation will improve, gradually.’’[1] He emphasized that once people have opportunities for employment, they have less incentive to engage in crime.

The “development is the key” argument is one of the tenets of the Belt and Road Initiative (BRI) and underpins China’s policy in Afghanistan. The turmoil plaguing Afghanistan has both spurred and impeded Beijing’s efforts to expand its economic involvement in the country. Nevertheless, China has gradually become more active in Afghanistan economically as well as politically.

China has sought to strengthen its economic ties with Afghanistan in an effort to help stabilize the country and thereby mitigate the domestic security risks arising from the continuation of conflict there.[2] Afghanistan has faced persistent economic hardship as a result of decades-long conflict, lack of investment, drought, corruption and the illicit drug trade. In the midst of these problems, generating export-led growth has been a particularly vexing challenge — and one that China has seemed keen to help Afghanistan overcome.

To address this challenge, the Afghan government has launched several initiatives, including the 2018 National Export Strategy.[3] An element of Afghanistan’s plan to realize the country’s full export potential is the China-Afghanistan air corridor, which was launched in November 2018. The air corridor with China aimed at boosting Afghanistan’s pine nut industry, which had incurred substantial financial losses due to smuggling through Pakistan. The air corridor has, as intended, fueled moderate growth of pine nut exports. However, the air corridor is financially unsustainable in the longer term.[4] In fact, the reason why local traders find it currently profitable is due to government subsidies.[5]

While the US Principal Deputy Secretary of State for South and Central Asia Alice Wells has recently criticized China for its lack of economic cooperation with Afghanistan, China had swiftly opposed the accusations by citing the ongoing economic initiatives.[6] Nonetheless, while the country continues to portray itself as an important economic partner for Afghanistan, the reality on the ground is much more complex.

China has so far initiated several major projects in Afghanistan’s three key sectors: mining/extraction, transportation infrastructure and agriculture. However, in some of these instances China’s contribution to Afghanistan’s economic development has fallen short of its initial aims.

In the agricultural sector, the China-Afghanistan air corridor does not really solve underlying problems of the Afghan economy. Even with the air corridor in place, Afghanistan continues to export raw materials while China enjoys most of the profit coming from the value-added processes that are carried out in China. While this limitation could be addressed by the recently-opened pine nut processing factory in Kabul, the future of this project remains unclear as months after its official opening, the factory remains inactive.[7]

Some of Afghanistan’s systemic problems could be addressed by investing in the country’s mining sector, given the job creation and revenue potential. In fact, China has tried to move in this direction. The most notable example is the Chinese investment in the Mes Aynak copper mine, for which Chinese state-owned companies won a 30-year lease for exploration. However, the project has stalled since 2008, due not only to security problems, but mainly because of the challenges related to supply chains and the infeasibility of the coal-fired power plant in Ishpushta.[8] While this project could add real value to the Afghan economy, the renegotiation of the deal has so far led nowhere.[9] In December 2019, President Ashraf Ghani cancelled two gold copper mining contracts citing as the main reason the inability of the companies to meet financial commitments.[10] Another problem is the lack of a legislative framework, which makes it difficult for many mines to operate legally, resulting in a substantial loss of revenue for the government. In addition, areas controlled by the Taliban remain without any governmental oversight. In 2019, for example, following a landslide in a Badakhshan’s gold mine located in territory under Taliban control, the government was unable to undertake rescue efforts, and a number of workers lost their lives.[11] Many of Badakhshan’s lapis lazuli mines, it should be mentioned, are used to fund the Taliban, with a new deposit falling into the insurgents’ hands in July 2019.[12]

The extension of China’s Belt and Road Initiative (BRI) to Afghanistan could conceivably make a significant contribution to the country’s economic progress. The cornerstone of the BRI is infrastructure development that fosters connectivity. Memorandum of Understanding (MoU) signed between China and Afghanistan in 2016 represented a commitment to jointly promote cooperation under the BRI. [13]

The implementation of some of the railway corridor envisioned in the Afghanistan National Railway Plan (ANRP) would improve the country’s regional connectivity would improve and enhance its integration into the BRI.[14] The ANRP seeks to establish the country as a regional transportation hub. China and northern Afghanistan are linked through the Sino-Afghan Special Railway Transportation Project (SARTP), the proposed Five Nations Railway Corridor, and a possible connection to the China-Pakistan Economic Corridor (CPEC). The Hairatan-Nantong freight service was inaugurated in September 2016 — an important milestone in the execution of the SARTP.[15] But on its maiden trip, service was disrupted due to security problems, resulting in the train returning empty to China.[16] The train was subsequently relaunched, this time with service in both directions.

Forging a rail link to CPEC has been challenging, given the troubled relationship between Afghanistan and Pakistan, as well as differences over whether India’s inclusion. Even were these political obstacles overcome, implementing the project would require routing rail lines through Helmand and Kandahar provinces, the primary stronghold of the Taliban and the country’s leading opium-producing region.

The BRI’s digital dimension is a second area where China could make a difference. In fact, ZTE and Huawei have been operating in Afghanistan since the early 2000s. Beginning in 2017, both companies have been working on Afghanistan’s 3G rollout, supplying GSM, 3G network equipment and CDMA for Afghan Telecom Corporation. In 2017, under the BRI framework, new deals for laying fiber optic network were also signed. The Silk Road Cable Project is a potentially promising avenue for collaboration between China and Afghanistan, though it has yet to materialize. By investing in the development and expansion of Afghanistan’s fiber optic networks, China could help provide considerable benefits to internet users there and in neighboring countries.[17]

A recent World Bank study estimates that Afghanistan will require between $6-8 billion in international grants to fund basic services so as to ‘‘sustain any potential reduction in violence.’’[18] It is therefore in the interest of all stakeholders, including China, to help Afghanistan attract foreign investment.

Yet, as previously shown, persistent violence, corruption  in Afghanistan has thwarted some of China’s major efforts to foster the country’s development. Meanwhile, China’s exposure to Afghanistan’s continuing insecurity has, if anything, increased. In December 2019, for example, new evidence emerged of Turkistan Islamic Party (TIP) training camps operating in northern Afghanistan[19] — posing a direct threat to China. It is therefore not surprising that China has taken a more assertive diplomatic role in the Afghan conflict, maintaining open channels of communication with both the Taliban and the central government as well as seeking to mediate.[20]

China’s increasing engagement in Afghanistan might also include modifying its security posture in Afghanistan in the event that its economic strategy and efforts to advance peace and reconciliation falter and as US forces are withdrawn. China’s security role has already evolved, albeit gradually. It encompasses patrols at the Tajik border as well as efforts to assist Afghanistan in strengthening counterterrorism capacity building through bilateral channels, the Shanghai Cooperation Organization (SCO), and the China-Afghanistan-Pakistan-Tajikistan Quadrilateral Cooperation and Coordination Mechanism.[21] Whether China is prepared to adopt a more proactive, direct security role remains to be seen.

What is manifestly clear, however, is that Afghanistan presents a formidable test of the theoretical underpinnings of China’s Belt and Road Initiative (BRI), in that efforts to enhance connectivity and thereby spur development continue to be hampered by the very conditions of domestic instability and regional rivalry they are intended to help mitigate.

[5] Interview with a local businessman in Kabul involved in pine nut trade.