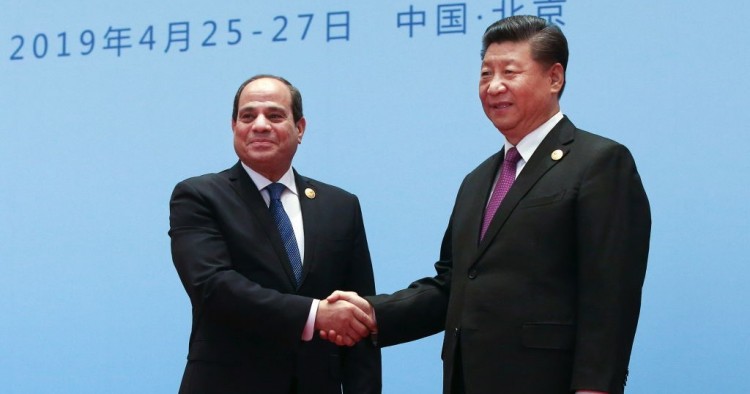 While the world is engaged in an ongoing discussion about the ramifications of the trade war between Washington and Beijing, the economies of the Middle East are shifting away from their longstanding ties with the U.S. toward economically powerful China — a move that may have long-term implications for the economic and political dynamics of the region.

There is no doubt that the relationship between the countries of the Middle East and North Africa (MENA) and China has taken a significant turn in the 21st century. China’s rapid economic growth necessitated an aggressive approach in pursuit of much-needed natural resources. The MENA region was largely excluded from China’s pivot toward Asia and Africa, and it was not until the Arab Spring in 2011 that China adopted a more engaged policy toward the key countries in the region. It was during this period, for example, that China embarked on the evacuation of its 40,000 citizens trapped in the civil conflict in Libya. This action was symbolic of the more active Chinese presence that followed in the region.

For their part, many MENA countries, now faced with the ramifications of the Arab Spring — such as political and economic instability — as well as slow growth due to falling oil prices, combined with a policy of disengagement by the U.S. from the region, welcomed China and its financing models with open arms.

China’s new approach toward the MENA region can be attributed to the following factors:

This more engaged involvement was reciprocated by similar high-level visits by leaders from the region to China. Many Middle Eastern leaders have visited Beijing more than once over the past five years. Egyptian President Abdel-Fattah el-Sisi has visited at least six times since taking office in 2014. Each visit involved the signing of a number of economic agreements, many of them large in scale, as the leaders attempted to solidify the political relationship in order to expand their economic ties.

In addition, many countries in the region have aligned their sustainable development strategies with China’s BRI in order to get better access to financing for their clean energy projects. Sustainability promises to be one of the big economic drivers — as well as a political necessity, given the health and other consequences involved — for the region, especially as countries seek alternative sources of energy to oil. China, and not the U.S., is emerging as a leader in this field, and is actively seeking to promote green development in the MENA area.

As a result of this increased engagement, China has become the largest investor in the region, and the most sought after. In 2018, China committed $20 billion in loans for reconstruction in the Arab world, as well as $3 billion in loans for the banking sector. Furthermore, and through a wide range of financing vehicles, China has provided a mixture of concessional, preferred, and commercial loans, as well as currency swaps, to support central banks and fund infrastructure mega-projects that use Chinese companies (mainly state-owned) and Chinese labor. These mechanisms do not entail any political requirements, but often involve strict conditions on the use of Chinese materials and labor.

There has also been a boom in trade between the two sides, which has multiplied to reach almost $245 billion. In addition, the MENA region is witnessing a growing presence from Chinese private sector companies, especially technology firms. For example, five of the top 10 e-commerce companies in the region are from China. They are drawn by the growing size of the MENA e-commerce market, which is expected to reach $49 billion by 2021.

We can only expect this trend of strengthening China-MENA relations to continue, especially as the BRI expands in the region. China has much of what the region needs, whether through its private sector in technology-related fields, state-owned conglomerates in infrastructure and construction, or state-sponsored financing vehicles such as the Export-Import Bank of China, the Silk Road Fund, and its banks.

This formula provides an easy fix for many of the region’s developmental challenges, but it does not come without attendant potential conundrums for China. It remains to be seen how the U.S. will be able to balance the increasing influence of China in the region, and how China will leverage its growing presence to advance its interests vis-à-vis the U.S. and the West. As China’s presence grows, it will become increasingly difficult to avoid being dragged into the political dilemmas of the region.