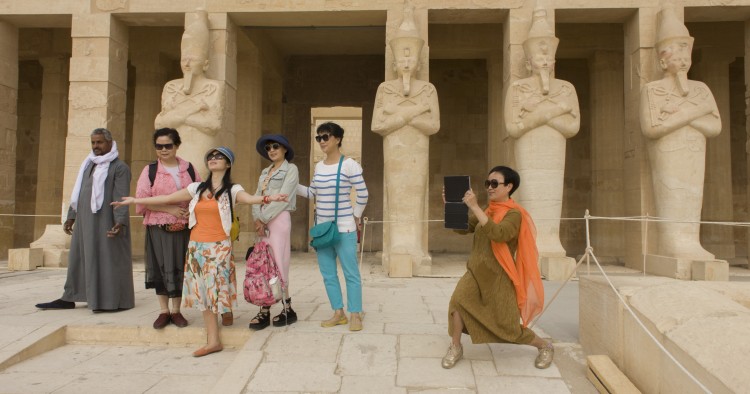 Over the past two decades, China has gradually incorporated the use of soft power into its foreign policy. China’s efforts to ramp up its soft power in the Middle East is part of a wider offensive to bolster trade and national security. This article discusses China’s use of tourism as an instrument of soft power in the region.

Tourism as a Soft Power Tool

Joseph Nye, Jr. introduced the concept “soft power” in Bound to Lead (1990) and further developed it in a series of books and articles.[1] According to Nye, soft power is “the ability to get what you want through attraction rather than through coercion.”[2] Promoting a country’s culture and political ideals on the world stage can yield significant economic and strategic advantages.

Nation states have a variety of ways to deploy soft power in an effort to shape others’ attitudes and preferences. Outbound tourism is one of them. However, International Relations (IR) scholars have been relatively slow in exploring the linkages between tourism, foreign policy, and soft power.[3] This is in contrast to scholars of tourism studies, who have recognized the potential of tourism and nation branding to convey and cast in a positive light a country’s culture and values, and thus help boost its influence.

Over the past two decades, soft power theory has gained currency among Chinese scholars[4] and the application of soft power has become an important element of China’s foreign policy approach.[5] China has sought to draw upon various sources of soft power to gain international status and influence, notably the country’s successful economic development model as well as national unity, regime legitimacy, science and technology, deft diplomacy, and respectable behavior in the international arena.[6]

The Belt and Road Initiative (BRI) is one of China’s key vehicles for soft power projection.[7] Assisting other nations through development, economic growth and connectivity is a way of wielding soft power in the interest of advancing China’s global standing. Beijing has also sought to capitalize on the popularity of Chinese culture abroad.[8] As recent studies have suggested, the Chinese government uses tourism as a form of soft diplomacy in its dealings with other countries. Such power is exerted by the “development of outbound tourism,” that is, by linking tourism with a political agenda.[9]

China is quickly becoming the most popular tourist destination for most countries measured by the number of trips and [10] Importantly, Beijing has also been the fastest-growing source of tourists in recent years, and the world’s top spender in international tourism since 2012. Tourism expenditure from China surged from $13 billion in 2000 to $55 billion in 2010, and to a staggering $258 billion in 2017.[11] According to the China Tourism Aacdemy, Chinese tourists spent $130 billion in 2018.[12] It is therefore not surprising that Beijing has sought to use outbound tourism as a policy tool to enhance its influence and image in the international affairs.

The projection of soft power has become a prominent feature of China’s foreign policy in the Middle East. Chinese policymakers realize that even though stimulating cooperation is not a simple process, the use of soft power could contribute to deeper political and economic links.

Outbound tourism has become an important soft power tool in China’s engagement  with the Middle East.[13] As the numbers of Chinese workers, tourists, students, and businessmen overseas increase, interaction with local populations plays a considerable role in shaping China’s regional positive image and promoting understanding to its partners. Beijing's large tourist population, with their appetite for shopping combined with their purchasing power, is recognized and welcomed by most Middle Eastern countries, as it is certain to have a huge impact on a destination country’s tourism economy.

No Middle East country currently ranks among the list of the top ten most popular destinations for Chinese travelers. However, the number of Chinese visitors to the region has risen in recent years. The number of Chinese travelers to the Gulf Cooperation Council (GCC) countries is expected to increase 21% by 2021 to 2.5 million visitors annually.[14] In 2018, 875,000 of the 15.95 million visitors to Dubai were from China.[15] That same year, about 400,000 Chinese tourists visited Turkey, up more than 60% year-on-year.[16] Nearly half a million Chinese tourists visited Egypt in 2018 compared with only 300,000 in 2017, and that number is expected to exceed 500,000 in 2019.[17] More important, China’s BRI, which cuts through the Middle East, has the potential to put the regional countries on the map for travel-savvy Chinese.

Although the growth of Chinese tourism can provide a valuable cash injection into Middle Eastern economies, it may also pose a substantial risk given that Beijing has a track record in its immediate neighborhood of using tourism as a means of promoting its foreign policy goals.[18] In recent years, China has used tourism as a means of exerting political pressure through restricting or threatening to restrict Chinese tourists’ access to Taiwan, South Korea, Japan, Malaysia, Philippines, and Vietnam.[19]

Beijing has also used its tight control over outbound tourism to promote its political agenda and to defend its interests in the Middle East. In 2000, for example, China was trying to bring a derelict Soviet vessel through the Bosporus to use as a basis on which to build its first aircraft carrier, but Turkey blocked the ship’s progress for 16 months. China used its soft power to persuade Turkey to allow the ship passage — promising to build two power plants and agreeing to place the country on a list of approved Chinese tourist destinations.[20]

Beijing has continued to employ outbound tourism as an instrument of soft power in its relationship with Turkey. The number of Chinese tourists to Turkey grew more than three-fold between 2011 and 2015, fueled by the launch of the BRI. But in July 2015, during anti-Chinese protests in Istanbul over Beijing’s treatment of the Uyghurs in which Chinese tourists were attacked and harassed, the Chinese embassy in Turkey issued a travel warning that caused a sharp decline in tourist flows.[21] The number again plummeted in 2016 amid security concerns and other negative events. During the first five months of this year, only 81,000 Chinese tourists visited Turkey.[22] The travel advisory was intended to protect the Chinese citizens traveling in Turkey, but at the same time conveyed a message of anger and frustration at Ankara’s blatant interference in China’s internal affairs.

China’s use of travel advisories as a soft power tool was also evident in the aftermath of the transfer of the US Embassy from Tel Aviv to Jerusalem and the recognition of Jerusalem as Israel’s capital in December 2017. Two days after US President Donald Trump announced the US decision, the Chinese Foreign Ministry immediately issued a travel advisory to Chinese tourists going to Israel. Prospective visitors were warned to “stay vigilant, keep watch and be cautious when traveling to conflicted areas in Israel and Palestine, including the Old City of Jerusalem and its neighboring areas.”[23]

Again, ostensibly, the travel advisory was intended to warn the Chinese tourists in Israel about the expected tension and violence, but at the same time it conveyed a message of dissatisfaction with the US decision that might harm its interests and jeopardize the Chinese citizens traveling in the region. The travel advisory, valid until January 2018, led to the cancellation of several Chinese business delegation visits to Israel, and a sharp decline in tourist arrivals Chinese.[24]

Following the Chinese travel warning, the number of Chinese tourist arrivals in Israel in the first half of 2018 dropped sharply. From January to August 2018, just 65,500 tourists from China visited Israel. Only after intense lobbying by Israel’s Foreign Ministry and embassy in Beijing did the Chinese Foreign Ministry cancel the travel advisory.[25]

Outbound tourism has emerged as an instrument of China’s soft-power strategy in the Middle East. The number of Chinese workers, tourists, students, and businessmen overseas are increasing, and interaction with local populations plays a considerable role in shaping China’s image to the outside world and promoting understanding among its counterparts in the region. As China aims to strengthen its partnerships with Middle East countries, undoubtedly the use of soft-power capabilities, among them outbound tourism, will continue to complement its growing political and economic interactions. However, recent instances of Beijing’s employment of outbound tourism — through the use of travel advisories — as a soft power instrument might give pause to Middle East countries, causing them to take a more cautious approach to the Chinese tourist market.

[3] Keith Hollinshead and Hou Chun Xiao, “The seductions of ‘soft power’: Multifronted Research into the Articulative Reach of Tourism in China,” Journal of China Tourism Research 8, 3 (2012): 227-247.