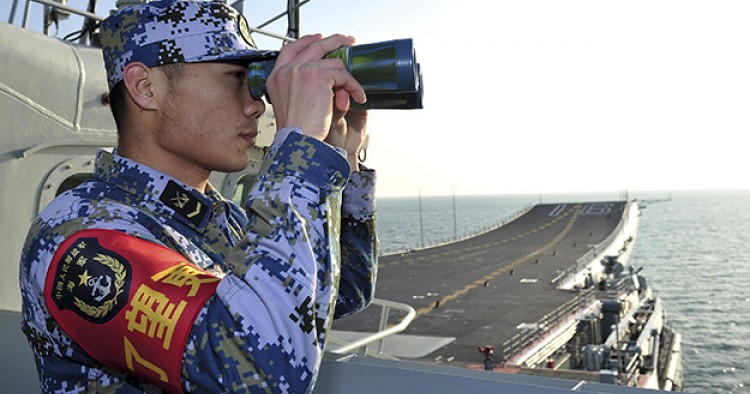 As a result of the growth of its comprehensive power, China today has two frontiers. One is the natural frontier of its sovereign territory; the other is an artificial frontier created by its overseas interests. By deploying a “soft” military presence overseas, specifically in the Middle East, China can protect its commercial interests while also providing public goods for the international community and minimizing the risk of damage to multilateral relations.

The deployment, reception, and onward movement (DROM) of foreign military powers into the global commons, mandated territory, or the territories of other countries usually proceeds according to either a “hard” or a “soft” military strategy. The hard approach includes several key elements. First, semi-permanent military bases are built within the borders of other countries, and the foreign power reserves the right to conduct specific military activities in those countries. Second, the foreign nation has the right to access and use the bases freely while enjoying extraterritorial rights and privileges. Third, these bases mainly support military efforts—as opposed to civilian missions—including combat, command, surveillance, and intelligence-collecting operations. While military bases enhance the overall deterrence capability of the host nations in which they are located, they can also create friction between the foreign and host nations, as well as incur high economic costs.

A softer military presence differs from the more permanent presence of a military base in a few fundamental ways. First, the foreign country does not have extraterritorial privileges since no military base means no “state within a state” or “special military zone.” Second, the foreign country does not seek to institutionalize its military arrangements with the host country. Third, foreign military forces conduct both military and civilian missions, especially in the areas of humanitarian relief; search and rescue; protecting, evacuating, and escorting nationals; peacekeeping; and conflict prevention—all of which fall under the category of “soft use of hard power.” Fourth, the soft approach to overseas military activity is mission-oriented and characterized by temporary deployment, which boasts greater flexibility and a lower economic cost. It seeks to resolve problems through short-term assignments. Broadcast relay, optical fiber cable terminals, communications equipment, satellite navigation ground stations, and aerospace launch and ground receiving stations are also important parts of a soft military presence.

Although Chinese diplomatic principles reject the “spheres of influence” mentality, they do not forbid temporary military deployment when Chinese interests are threatened.

In recent years, under a banner of peace and development, the non-military functions of the Chinese navy have expanded. Naval diplomacy, the combating of piracy, disaster relief, and ocean rescue have all become crucial functions of the navy.

Military exchanges have also increased between China and Thailand, Myanmar, Cambodia, Pakistan, the Maldives, Sudan, the Seychelles, Saudi Arabia, and others. These exchanges have laid a foundation for further military cooperation in the western Indian Ocean and the Persian Gulf.

Furthermore, since elements of the Chinese navy were dispatched to Somali waters in 2008, China has launched joint anti-piracy exercises and naval visits to neighboring countries and regions in an effort to exercise military diplomacy. It has also built interim technical service stops in Djibouti, Oman, Saudi Arabia, and Sudan. These interactions have created ideal conditions for developing the Chinese military presence overseas.

The further expansion of China’s soft military presence overseas is necessary to protect its growing foreign commercial investments and other interests, not to mention the safety of Chinese expatriate workers. Such an expansion is politically feasible due to Beijing’s strong record of adherence to the principles of non-alignment, respect for international boundaries, and non-interference in other countries’ internal affairs.

The expansion of China’s soft military presence overseas is also technically feasible. With the acceleration of its military modernization, China is now able to project its power overseas. Particularly important has been the deployment of China’s first aircraft carrier, the Liaoning, which has enabled the military to extend its reach into the South China Sea, the western Pacific, and the Indian Ocean. The carrier also provides technical support for Chinese forces needing to dock temporarily between domestic bases and overseas stations.

At present, the United States has deployed approximately 50,000 personnel and established military bases in the six Gulf Cooperation Council (GCC) countries, Turkey, Djibouti, and Afghanistan. Its military influence is unparalleled. Britain and France have built military bases and deployed about 3,000 personnel in Cyprus, the UAE, and Djibouti. Their military presence ranks second to that of the United States. Russia and Japan constitute a third tier, having deployed about 200 personnel to Syria and Djibouti, respectively, and each having one military base. In contrast, China, India, and South Korea have not established military bases in the Middle East, though they do have convoy fleets and peacekeeping forces in the region and in the waters off Somalia.

When examining the West’s strategic position in the Middle East, scholars should start from a geopolitical point of view. The Western definition of a national interest is usually anchored in concerns about threats to national security (e.g., terrorism, proliferation of weapons of mass destruction, and the possibility of other great powers seeking political and military dominance in the Middle East). Usually, traditional powers are concerned more about the military balance and their relative position in the region than safeguarding their economic, trade, and energy interests, which are perceived as secondary.

In contrast, China, India, and South Korea have made it their primary objective to address domestic problems, caused primarily by overpopulation and resource scarcity. In the international sphere, these countries therefore focus on economic competition and so-called “soft control.” The implementation of this geoeconomic strategy relies mainly on the Chinese government’s ability to expand its overseas investment and foster energy and trade cooperation. By increasing the well-being of the Chinese people and developing the domestic economy, China seeks to maintain stability and reshape the world economic order.

During the post-Cold War era, China’s overseas trade lines have never been threatened directly. Although China’s sea power is facing a challenge in the western Pacific, it has not stopped China from rising peacefully. Geoeconomic strategy has remained the cornerstone of China’s diplomacy. In 2013, President Xi Jinping launched the 21st Century Maritime Silk Road project—an initiative calling for China to collaborate in developing maritime infrastructure (especially ports) across the historic Silk Road trade route linking East and West.[1] In his keynote address at the sixth ministerial conference of the China-Arab States Cooperation Forum (CASCF) in June 2014, President Xi outlined his “1+2+3 strategy”—a comprehensive strategy aimed at upgrading Sino-Arab economic ties in the areas of energy, trade, and investment, as well as in three new sectors (nuclear power, aerospace technology, and new energy).[2] Both the 21st Century Maritime Silk Road initiative and the 1+2+3 strategy stem primarily from geoeconomic—not geopolitical—considerations.

First, China will continue to use its military in the service of its geoeconomic strategy. China will strengthen economic and trade exchanges with the Middle East, complementing them with a soft military presence that is located around the relatively concentrated areas of China’s overseas interests. In Saudi Arabia, 70 Chinese-funded enterprises currently employ 16,000 Chinese workers. In Dubai, the China-Middle East Investment and Trade Promotion Center covers an area of 150,000 square meters.[5] There are 3,000 Chinese enterprises and representative offices and a total of 200,000 Chinese expatriates in Dubai, making it the largest expatriate Chinese community.[6] By continuing to protect and develop its economic interests in the Middle East, China will increase its wealth and achieve a peaceful, gradual transfer of global power.

Second, the Chinese convoy fleet in the Gulf of Aden and Somali waters will play a “bridgehead” role in case of a natural disaster or other emergency requiring relief or evacuation. It maintains up to 5,000 km of maritime trade and safeguards transport lines and investment projects from the South China Sea to the Persian Gulf. Trade routes connecting China with the Middle East are important to China in their own right, and the region also represents the “middle ground” connecting European and African trade with China.

Third, China’s soft military presence in the Middle East will continue to follow traditional Chinese diplomatic principles that reject overseas military deployments, hegemony, and power politics. In the twenty-first century, the United States, Europe, and Japan have formed the “traditional core area,” while China, India, and Brazil have forged a “new core area.”[7] These two core regions have a higher degree of globalization and human development. In contrast, the Middle East, Central Asia, and Africa are marginalized. In their struggle with poverty, chronic disease, inter-communal conflicts, and other challenges, these relatively poor areas can pose a direct or indirect threat to the core areas and therefore represent key areas of global governance. The United States, Britain, and France rely primarily on military bases to protect their geopolitical interests in the Middle East. China, India, and South Korea rely on temporary military exchanges to protect geoeconomic interests. The Western and Eastern powers have thus created complementary power structures in the region, providing an opportunity for increasing strategic coordination. A growing soft military presence in the region will enable China not only to protect its own interests but also to participate in regional governance and develop a new model for great power relations.