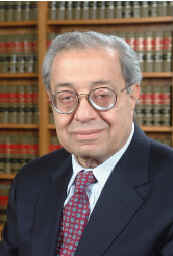 Clovis Maksoud, a diplomat, writer, intellectual, professor, and a familiar figure in Washington since the 1970s, has passed away at the age of 90.

At earlier periods in his career he had served as a writer and editor, and continued to write newspaper columns and articles for many years, as well as books. In recent years he served as Director of the Center for the Global South at American University in Washington.

Ambassador Maksoud and his late wife Hala were prominent figures around the Washington diplomatic, Arab, and Lebanese communities for decades. He was always friendly, accessible, and outspoken, a highly visible voice for Lebanon, for Palestine, and for the Arab World as a whole.