A Coalition of Uncertainty 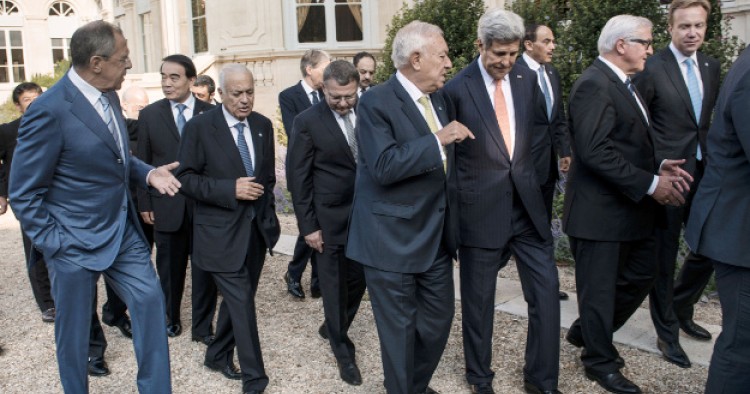 One way to grasp the immense difficulty facing President Obama as he tries to forge an effective international coalition to oppose the Islamic State is to examine the difference between this effort and the last time the United States led a diverse group of countries to take on a conflict in the Middle East: Operation Desert Storm, in 1991.

After Iraq invaded Kuwait in the summer of 1990 and declared it to be Iraq’s 19th province, President George H.W. Bush and his secretary of state, James A. Baker, worked for months to organize a “coalition of the willing” to retake Kuwait and evict the Iraqis.

It was a challenging diplomatic feat even though they had the advantage of U.N. Security Council resolutions endorsing such a campaign. The objective was clear-cut and finite. All of Iraq’s neighbors supported it. Everyone accepted the legitimacy of Kuwait’s government. And the countries that were asked to sign on could see that the United States was fully committed to do the heavy lifting: there were half a million American troops in Saudi Arabia, awaiting the signal to begin operations.

As a result, 39 countries participated in the war, including such unlikely partners as Syria, Bangladesh, Afghanistan, and Honduras. They shared a common objective: restoration of the sovereignty of a member state of the United Nations that had been invaded by another, in an unquestionable violation of international law and world order.

The situation confronting Obama and Secretary of State John F. Kerry is considerably murkier, to say the least. The United States is not just herding cats, it is herding wolves, rabbits, chameleons, and maybe a few sheep.

Obama and Kerry are asking other countries to join the United States in an effort to destroy a group of armed rebels who are not invaders, but mostly indigenous to Iraq and Syria. The mission is open-ended. The United States is not prepared to send any ground troops, let alone half a million. The legitimacy of Syria’s government is long gone, in the view of the United States and Saudi Arabia, and Iraq’s new government is still struggling to establish itself. The only relevant Security Council resolution, 2170, condemned ISIS for human rights violations that “might constitute crimes against humanity” and called for the “perpetrators to be brought to justice,” but it did not authorize military action. And even the limited number of countries that are willing to participate mistrust each other, have different motivations, and seek differing outcomes.

Moreover, there is no hiding the fact that a military campaign against ISIS is welcome to Syria, to the Lebanese Shiite militia Hezbollah, and possibly even to Iran. To the extent that the United States and its partners inflict damage on ISIS, they will inevitably be carrying water for the Iranians, for Hezbollah, and for the government of Syrian president Bashar al-Assad.  It was difficult for Syrian Deputy Foreign Minister Faisal Mekdad to keep the satisfaction out of his voice while he was telling NBC News in an interview that that Syria would welcome U.S. airstrikes on its territory because his country is a “natural ally” in this campaign.

“In theory,” the prominent Saudi journalist Jamal Khashoggi wrote in Al-Hayat, “it is in the interest of Saudi Arabia, Iran, and the rest of the countries in the region to unite against the Islamic State in Iraq and Syria, with the support of the United States and the international community. However, in reality they have divergent interests and conflicting priorities.  They do not even trust each other. Therefore, all of them are facing tough choices that will hamper and delay decision-making when they meet to set up strategies to eliminate ISIS.”

Kerry got an early taste of this on the day after Obama’s address to the nation when he met in Jeddah with the foreign ministers of Egypt, Iraq, Jordan, Turkey, Lebanon, and the six monarchies of the Gulf Cooperation Council. Saudi Arabia, Bahrain, and the United Arab Emirates put aside their longstanding and unresolved differences with Qatar to sign a joint communiqué in which they and the other Arab states at the meeting pledged to “do their share in the comprehensive fight” against ISIS, by helping refugees, “repudiating hateful ideology,” cutting off the flow of foreign fighters to the insurgents and “as appropriate, joining in the many aspects of a coordinated military campaign.”

In a sign of the difficulty the U.S. faces, Turkey declined to sign the communiqué and let it be known that it will not permit U.S. Air Force planes based at Incirlik to participate in any operations against ISIS other than humanitarian. This is the same NATO ally that refused to allow U.S. troops to cross its territory to fight Iraq in 2003. The Saudi foreign minister, Prince Saud al-Faisal, said after the Jeddah meeting that “there was no difference at all between Turkey and any member of this meeting…I have not heard from any party to this meeting today, they have not expressed any reservation with regard to the role required from them.” It was hard to square that with Turkey’s refusal to sign the communiqué, and he offered no elaboration. Turkey is known to be concerned about the fate of 49 of its citizens, including diplomats, whom ISIS captured when it overran the city of Mosul in June—which it did after Iraqi forces trained and equipped by the United States broke and ran away.

After Jeddah, the peripatetic Kerry was in Paris, where representatives of some 30 countries, including Russia, pledged to support the anti-ISIS campaign “by any means necessary, including appropriate military assistance.” Everyone said supportive things, but other than France and Australia no one pledged to take any specific action at any specific time. It remained unclear who was willing to do what, and for how long. U.S. officials said several Arab countries are willing to participate in the air campaign against ISIS; they did not say which ones, but the United Arab Emirates and possibly Saudi Arabia are likely candidates.

For the Gulf states, it was a measure of the anxiety about ISIS that pervades the region that Qatar, which supported the Muslim Brotherhood government in Egypt, and Egypt,  now run by the generals who overthrew the Brotherhood and outlawed it, signed the Jeddah cooperation pledge. The same could be said about Saudi Arabia, which wanted nothing to do with the previous Iraqi government headed by Nouri al-Maliki, a Shiite who excluded Sunnis and Kurds from power. Now that Maliki is gone, Saudi Arabia joined Iraq in signing the Jeddah document, in which “the participants hailed the formation of the new, inclusive Iraqi government and expressed their support for the immediate steps it has pledged to take to advance the interests of all Iraq’s citizens.”

Cooperating with the United States against ISIS carries some political risk for the Gulf states because except in Bahrain most of their people are Sunni Muslims, and thus they are fighting their co-religionists in a cause supported by Shiite Iran. Saudi Arabia’s fear of ISIS is so great that the kingdom will allow the United States to use a base there for the training of Syrian rebels fighting both ISIS and the Assad regime, even though the presence of any U.S. military personnel on Saudi soil is an incitement to the kingdom’s home-grown extremists. It was the presence of those half million troops in Saudi Arabia before Desert Storm that outraged al-Qaeda and Osama bin Laden.

Iraq’s Kurds, who have been carrying most of the burden in fighting ISIS in northern Iraq, were not part of the Jeddah gathering or the Paris conferece because they are not an independent country, and one of Turkey’s concerns is that they not become an independent country lest that encourage Turkey’s own substantial Kurdish minority to emulate them. The Kurds had accused Maliki of short-changing them politically and economically, but now their participation in the fight against ISIS is crucial to the survival of the Baghdad government.  Assistant Secretary of State Tom Malinowski told Congress the other day that “the cooperation between Baghdad and Irbil [the Kurdish capital] is at historic levels and we hope to continue to build on that.” Whether that hope is fulfilled may depend on whom Prime Minister Haider al-Abadi appoints as Defense Minister.

If the target of the proposed alliance were a country, participants in an alliance against it who did not wish to commit military forces could take non-military steps such as the imposition of economic sanctions, withdrawal of visas, and cancellation of diplomatic relations. By its nature, ISIS is impervious to such tactics.

The multiple uncertainties surrounding this venture are compounded by the fact that the United States and its Security Council partners are bearing down on a Nov. 24 deadline to reach a nuclear agreement with Iran. A clear-cut outcome to those talks, either way, could affect Iran’s behavior all across the region, where its ability to stir up trouble is undiminished.

Beyond that is the question of whether the U.S. strategy itself is viable. Obama said ISIS is a “terrorist organization” that the purpose of the planned alliance was to fight “these terrorists.” But analysts such as James Coyle of Chapman University in California argue that ISIS is an armed insurgency more than it is a terrorist organization, and that what is needed is a counter-insurgency strategy, which is not the same thing as a fight against terrorism.

Obama said the purpose of Kerry’s trip to the region was “to enlist more partners in this fight, especially Arab nations who can help mobilize Sunni communities in Iraq and Syria to drive these terrorists from their land.” But if driven out of Iraq and Syria, where would they go? They are unlikely to return quietly to their homes, or to surrender. Does that mean, then, that they must die? Perhaps so, but if that is the case someone—the Free Syrian Army, the Kurdish Pesh Merga, the Iraqi army—is going to have to kill them. It is a daunting task.