The Consequences of Inaction: US and NATO Syria Policy 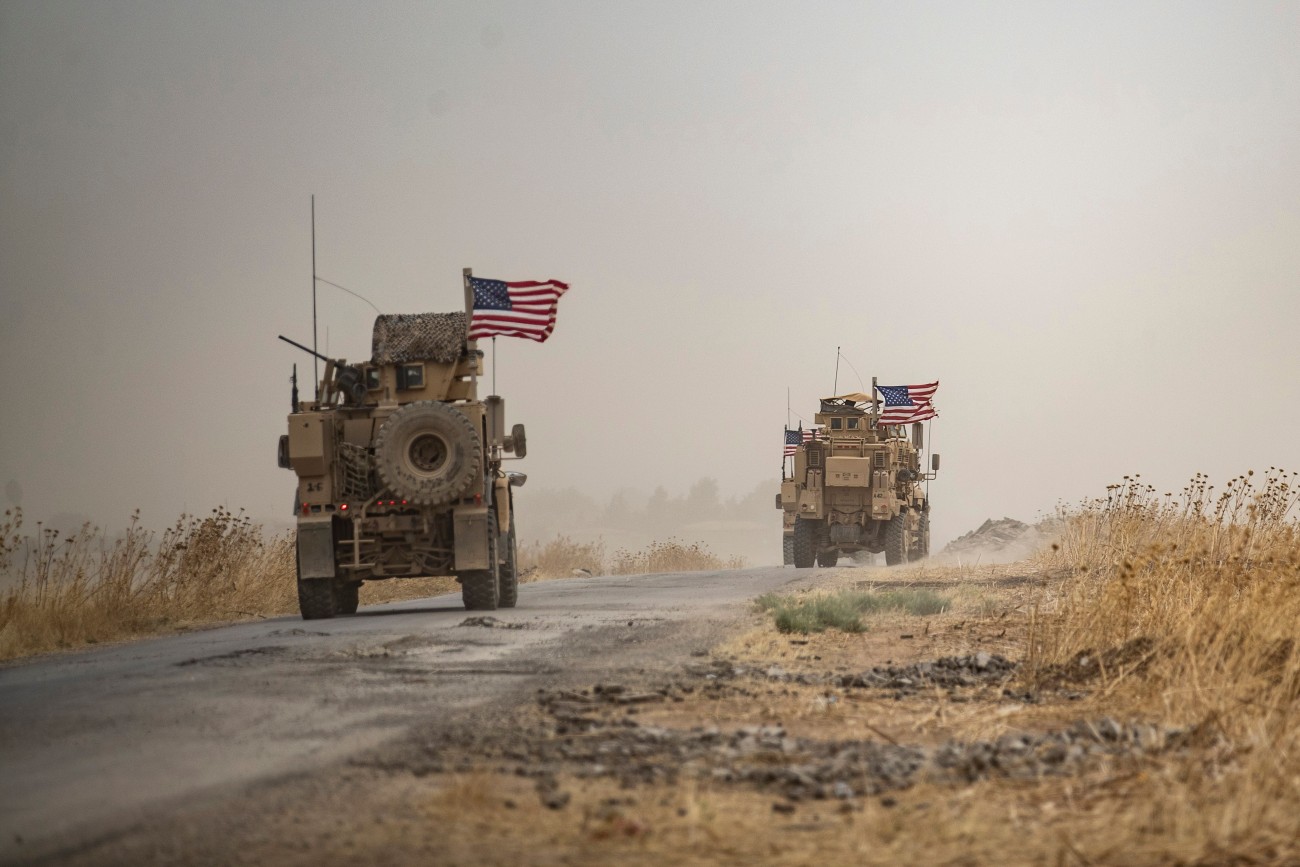 In recent years of the Syrian crisis, the reluctance of NATO states to take decisive action to secure their interests and protect Syrian lives has had drastic repercussions in both Syria and the wider region. Where NATO members have shown indecisiveness and a refusal to engage, their geopolitical rivals, Iran and Russia, have seized the moment and cemented their influence. Tehran and Moscow have not only resuscitated the Assad regime but have also bolstered their ability to further their interests across the Middle East. Russian-recruited Syrian mercenaries now fight in Libya, Moscow has courted U.S. allies in the Middle East and NATO members in Europe, and Iranian-backed militias have entrenched themselves within striking distance of Israel. However, a new U.S. administration has an opportunity to reverse this trend. As the regime is challenged by a crippling economic crisis, it is essential for the U.S. to capitalize on these circumstances and cohere NATO allies around a collective approach in Syria that will secure their interests and bolster regional security. 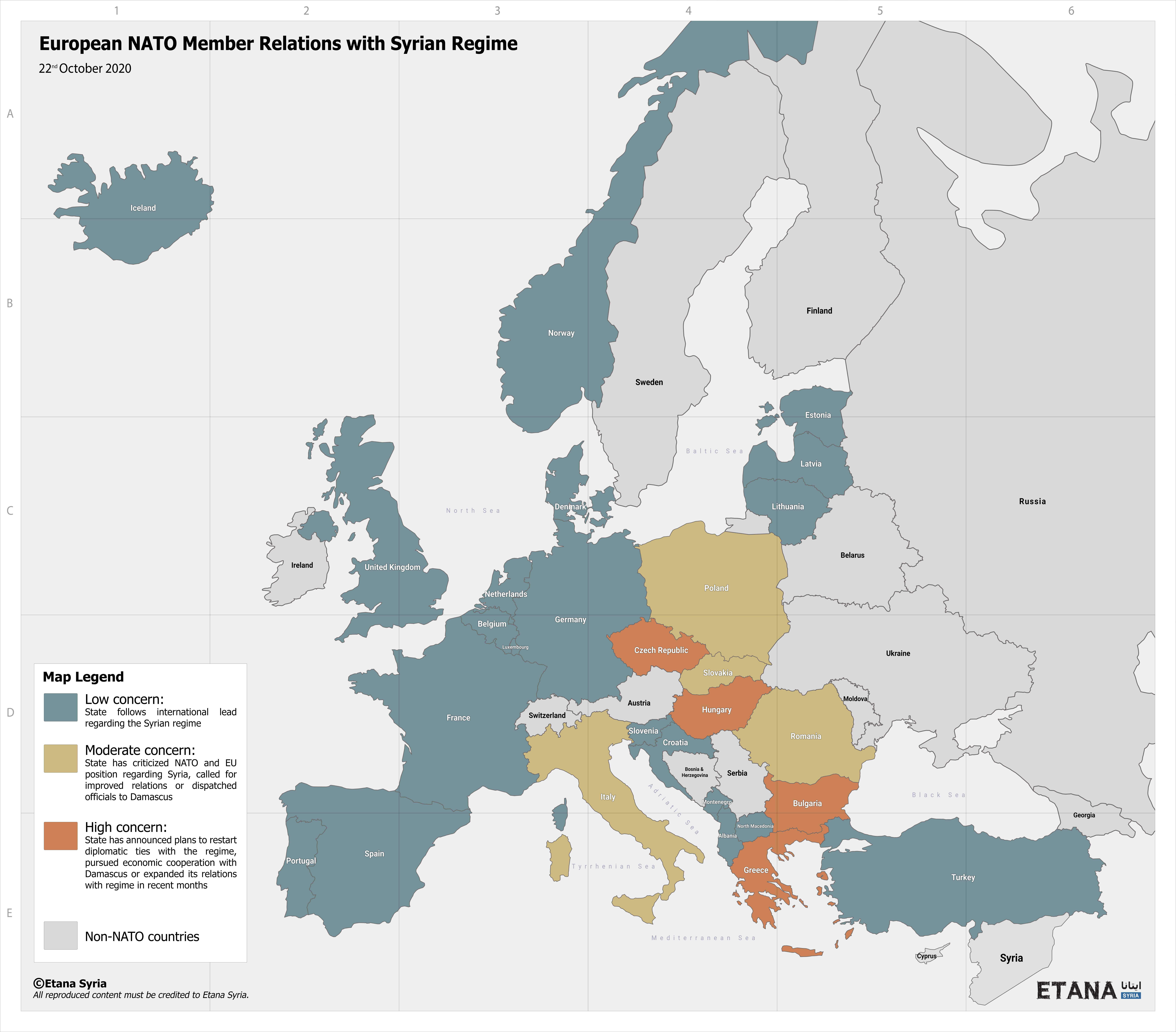 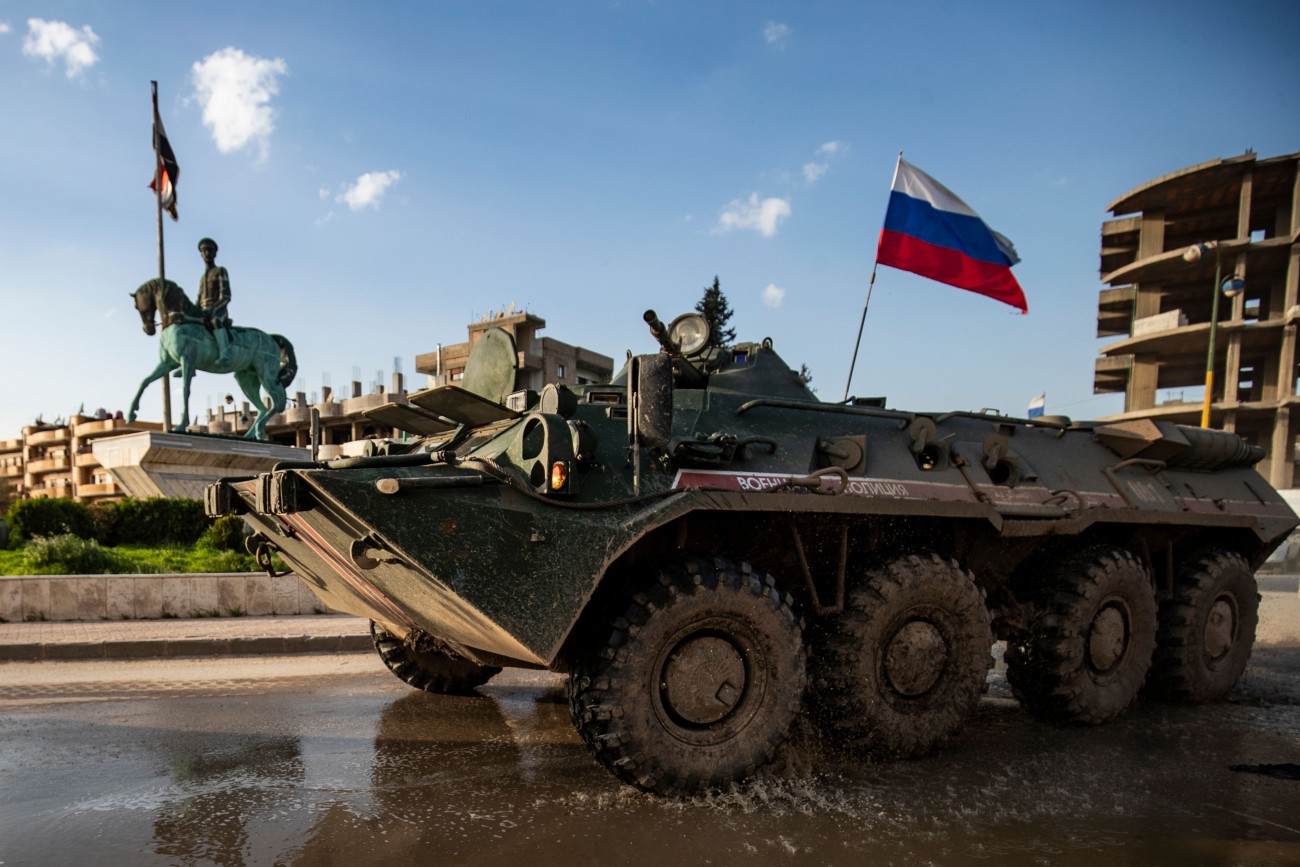 "Leading NATO members’ passivity vis-à-vis the Syrian regime has created conditions that allowed regional security to deteriorate and has left a vacant space for other willing actors — such as Russia and Iran — to decisively extend their influence into the Middle East."

The regime in Damascus is rapidly exhausting its resources and finances after nearly a decade of conflict. Aggressive U.S. and EU sanctions against the regime’s inner circle continue to expose the regime’s inadequacy and reliance on foreign allies for economic survival. As the situation in Syria becomes more complex, Syria requires likeminded allies to share a collective policy approach, as was the case in the first years of the Syrian crisis. A cohesive approach with a coalition of likeminded NATO states means that that Syria policy can be more than the sum of its parts. This is essential in the face of international fatigue toward the Syrian crisis and the trend of regional normalization.

Inaction in Syria, when weighed against other available options, is a political act in and of itself, and the last decade of violence in Syria demonstrates its cost. Leading NATO members’ passivity vis-à-vis the Syrian regime has created conditions that allowed regional security to deteriorate and has left a vacant space for other willing actors — such as Russia and Iran — to decisively extend their influence into the Middle East. Any effective policy pressure on the Assad regime requires consistency and follow through by NATO members in regards to their objectives and ultimatums. Inaction upon the regime’s ambivalence toward “red lines” has emboldened the regime to continue waging acts of violence against the Syrian people, including chemical weapons attacks and other atrocities. As the international community faces a new U.S. administration under President-elect Joe Biden, it is essential to reflect on the consequences of previous Syria policy and the cost of inaction to inform future policy decisions.

The U.S.’s disengagement from Syria has fostered increased instability both for Syrians and their regional neighbors, with a series of policy developments demonstrating the grave toll of inaction. A rapid drawdown of U.S. military positions in north-east Syria greatly de-stabilized the area — not just leading to fighting between the Turkish-backed forces and U.S. partner forces in the Syrian Democratic Forces (SDF), but also impairing the ability of international organizations to conduct critical humanitarian and stabilization programing. Compared with less than a year ago, the situation is striking — where once the U.S., its partner forces, and a coalition of European and Arab allies worked cohesively to secure the enduring defeat of ISIS, the radical group is now showing signs of a resurgence.

Similarly, until as late as 2018, the U.S. and U.K. helped counter instability in south Syria via a series of support mechanisms to the armed opposition, civil society, and local power brokers. On the political front, the U.S. and its allies lost their influence within the political process. Peace talks shifted to Astana rather than Geneva, with Iran, Turkey, and Russia negotiating a system of de-escalation zones that resulted in ineffective and poorly enforced cease-fires that enabled the regime to capture territory. By January 2019, three of the four designated de-escalation zones had been recaptured by the regime after more than a year of devastating aerial bombardment and ground offensives across the country. Meanwhile, Russia has steered the political process into a dead end with the constitutional committee, allowing the regime to focus on consolidating its military gains. However, rather than standing united, NATO allies were spooked by Russian aggression and its assistance to the regime’s military campaign on the south and withdrew virtually all stabilization and humanitarian initiatives, with grave consequences for Syrians’ lives across south Syria that are still felt to this day.

Iran’s presence and activities have a highly destabilizing impact across Syria and the wider region. This trend should be of high shared concern to NATO members since it threatens NATO allies and destabilizes the region in general. Yet, as the U.S. and its NATO allies have withdrawn, Iran has swept in to take their place. An area that should be of acute concern for NATO allies is Iran’s covert role in south Syria, where through local Syrian Hezbollah it has expanded a network of illicit drugs, arms smuggling, and recruitment of new fighters to support its local militias deployed adjacent to the Israeli border. Iran’s presence in southern and eastern Syria continues to exploit the porous border zone with Iraq and Jordan, injecting illegal arms and narcotics into Jordanian territory and creating a massive cross-border smuggling infrastructure to and from Iraq. These activities have destabilized border communities and have effectively eroded the Syrian-Iraqi border in particular. 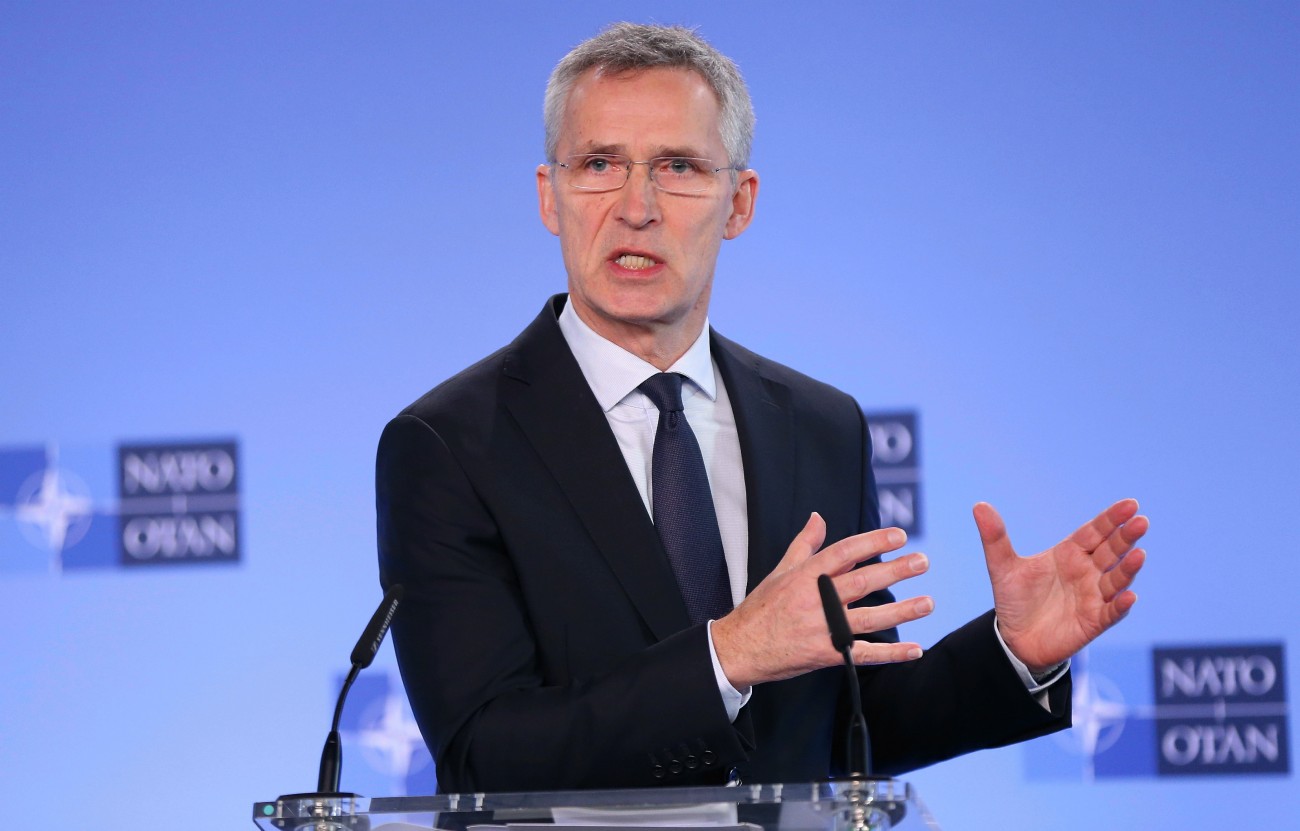 "In the absence of ... decisive U.S. leadership, NATO allies’ cohesion has regressed, leading at points to the gravitation of several Arab states closer to Russia despite previous opposition support."

A symptom of years of limited and disjointed action has been the disintegration of the U.S. and NATO’s strategic partners in both Syria and the surrounding region. At the height of U.S. support for the Syrian opposition, it was working with a wide coalition of allies: Jordan, the UAE, Saudi Arabia, Qatar, France, the U.K., and others. All actively supported activities against the Assad regime. In the absence of this decisive U.S. leadership, NATO allies’ cohesion has regressed, leading at points to the gravitation of several Arab states closer to Russia despite previous opposition support. For example, the UAE — a former opposition and SDF backer — re-opened its embassy in Damascus and re-engaged with the Syrian regime in late 2018, roughly coinciding with the state visit of Vladimir Putin to Abu Dhabi to pen a $1.3 billion business agreement with the Emirati government. Even within NATO itself, this warming between Russia and stalwart pro-opposition allies is clear. Turkey continues to gravitate closer to Russia, with Ankara expanding its military relationship with Russia at the direct expense of its relationship with the U.S.

On May 5, 2020, Greece’s Ministry of Foreign Affairs appointed a new special envoy to Syria for the first time since 2012. Tasia Athanasiou, former Greek ambassador to Syria from 2009-12 and briefly ambassador to Russia in spring 2019, is set to be the first Athens-appointed official to conduct diplomatic relations with Damascus since Greece shuttered its embassy there in 2012. The Greek government stated that the new special envoy’s mandate would include “coordination of actions in view of the efforts towards the reconstruction of Syria.” Days after the Greek announcement, Cypriot Minister of Foreign Affairs Nikos Christodoulides stated in a radio interview with a local press outlet that Nicosia would soon re-open its diplomatic mission in Syria — a move that comes amid the context of ongoing heightened tensions between Greece and Turkey.

Greece and Cyprus join a slew of other central European and Mediterranean states such as Poland, Slovakia, Romania, Bulgaria, Hungary, and Italy that have all signaled in recent months a desire to improve ties with the Assad regime. These calls for improved ties with the regime that break with EU and NATO policy regarding Damascus stem from multiple areas. Many former Soviet states have decades of business and political ties with Syria, while countries such as Greece see Syria’s Greek Orthodox Christians — numbering some 700,000 individuals as of 2010 — of particular interest and concern. Anti-migrant rhetoric following the influx of Syrian refugees into Europe from 2014 onwards is also a popular talking point for the European far-right, who view Assad as a pragmatic solution to a predominantly European problem. No matter how European states justify normalization with the Syrian regime, maintaining cohesion within the EU and NATO is critical to pressure the Assad regime for political concessions. Such cohesion will require additional actions by leaders within NATO to rein in fringe actors seeking to break rank and normalize ties with the regime.

1. U.S. military vehicles drive in the vicinity of an oil field in Rumaylan amid a sandstorm in Syria’s Kurdish-controlled northeastern Hasakeh Province. (Photo by DELIL SOULEIMAN/AFP via Getty Images)

2. A Russian military police armored infantry vehicle returning from a joint patrol with Turkish forces along the Syrian-Turkish border, drives along a roundabout near Qamishli airport. (Photo by DELIL SOULEIMAN/AFP via Getty Images)

3. NATO Secretary-General Jens Stoltenberg makes a speech after extraordinary meeting on Syria at the NATO Headquarters in Brussels on Feb. 28, 2020. (Photo by Dursun Aydemir/Anadolu Agency via Getty Images)

ETANA, a Syrian organization established in Damascus in 2001, is committed to achieving a democratic, inclusive future for all Syrians. Since the onset of the Syrian crisis, ETANA has worked to find a sustainable political solution by building linkages and accountability between local communities, as well as the international community. It focuses on providing accurate reporting and analysis of the situation on the ground in Syria, which has proven vital to achieving coherent Syria policy. Follow ETANA’s work on Twitter @ETANA_Syria.