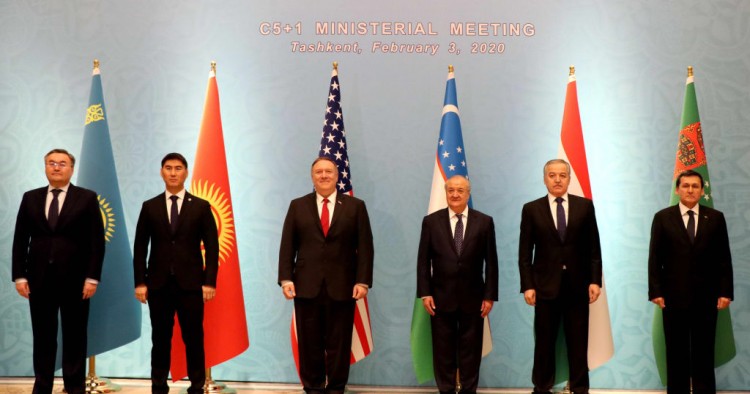 Whereas in the 1990s, U.S. policy focused on state building, economic development, WMD elimination, and democracy promotion, in the 2000s, counterterrorism rose to the forefront of the U.S. agenda. More recently, the U.S. government has become heavily concerned with expanding Chinese and Russian influence in Eurasia. Though some issues can be managed in multinational frameworks, many are best addressed through bilateral engagement due to differences among the countries. The perennial challenges facing U.S. policy encompass decreasing Western resource commitments; Chinese, Russian, and Iranian opposition; weak civil society partners; limited U.S. business engagement beyond the energy sector; and regular prioritization of other regions.

The Central Asian region has periodically attracted high-level U.S. visitors. For instance, in the fall of 2015, John Kerry became the first Secretary of State to visit all five Central Asian countries in one trip in over a decade. This February, Secretary of State Mike Pompeo travelled to Kazakhstan and then Uzbekistan, where he met with the foreign ministers of all five Central Asian governments. Both delegations strived to reassure local, political, economic, and societal leaders of Washington’s concern for Central Asian issues. For example, they insisted the United States would maintain a strong presence in Eurasia notwithstanding the U.S. military drawdown and decreasing U.S. civilian assistance programs.

Similar to Kerry’s visit, no major agreements or blockbuster initiatives were announced during Pompeo’s trip. However, on February 5, the day after Pompeo returned from his trip to the region, the Trump administration released its new 'United States Strategy for Central Asia 2019-2025'. The Strategy makes many of the same points as the previous 2015 Strategy for Central Asia, but U.S. officials have noted that several recent developments working in the U.S. favor, such as the new Uzbek government’s greater commitment to domestic reform and regional cooperation, which has been reciprocated by other Central Asian states.

In the U.S. view, the greater cooperation engenders a more attractive environment for U.S. investment and a better “counterweight” to Beijing and Moscow. Nonetheless, there are also new challenges to realizing Washington’s goals in the form of repatriating and reintegrating former ISIS fighters as well as confronting China’s surging economic presence in the region.

Though emphasis by the Trump administration on Afghanistan’s connectivity to Central Asia represents a novel dimension, earlier administrations had a similar goal. Yet, there were some differences between the Kerry and Pompeo trips. Of note, Pompeo’s occurred when the Taliban-U.S. peace process had achieved greater progress than ever before, which could further reduce the U.S. interest and military presence in Eurasia. Furthermore, whereas Kerry made it a point to visit all five Central Asian countries, Pompeo limited his travels to two countries—Kazakhstan, the state with the largest economy, and Uzbekistan, the most populous state (though he did meet with all five foreign ministers in the latter country).

Although Kerry pressed for human rights improvements throughout Central Asia, Pompeo castigated Chinese policies in this area while prioritizing boosting U.S. investment in Central Asia. Importantly, while Kerry denied that Washington was engaged in a competitive great game with Beijing or Moscow even while encouraging Central Asians to pursue independent policies, Pompeo’s statements were overtly critical of the Russian and especially Chinese governments. Pompeo denounced Beijing’s repression of Muslim minorities and in Kazakhstan even met with Kazakhs whose family members have been detained by the Chinese authorities.

U.S. policy toward the South Caucasus under Trump is comparatively less developed than toward Central Asia. Though senior U.S. officials such as Vice President Mike Pence and National Security Advisor John Bolton have visited all three South Caucasus countries. Vice President Pence visited Georgia in the summer of 2017 and Bolton had multiple engagements with leaders of all three countries. The United States has not issued a similarly comprehensive strategy document for the region or launched major new policy initiatives. In terms of concrete actions, U.S. policy toward the region seems replete with contradictions.

Despite the administration’s intermittent efforts to improve ties with Moscow, the U.S. government has steadfastly supported the territorial integrity of countries under partial Russian occupation and demanded the removal of all Russian troops from territory where the host government does not support their presence. Yet, U.S. diplomacy has not vigorously sought to resolve regional conflicts, such as that over Nagorno-Karabakh, even though their resolution could weaken Russian leverage as well as better protect friendly countries. The administration has also been cautious in dealing with the new government in Armenia, whose leader is making democratic reforms and less oriented to Moscow than his predecessors. Despite the proximity of all three countries with Iran, it is unclear how the administration is applying its “maximum pressure” against Tehran as far as this region is concerned.

Though paying lip service to further NATO membership enlargement, the Trump administration is not opposed to the European position that offering alliance membership to South Caucasus is presently impossible. However, it has gone further than previous U.S. administrations in building ties with Georgia, selling defensive lethal weapons, denouncing unilateral Russian border changes in that country, providing additional security assistance against cyber and other non-lethal threats, and considering signing a bilateral Free Trade Agreement. The administration has also encouraged Georgia and Azerbaijan to ship Caspian Basin oil and gas to Europe independent of Russian-controlled pipelines.

Attaining the ambitious U.S. economic and security objectives for both regions will require overcoming major challenges. Central Asia and the South Caucasus are simultaneously a buffer zone and a transit area regarding neighboring regions: Russia and Eurasia, the Middle East, and South and East Asia. Geography, history, and economics substantially favor China and Russia in any contest with the United States for influence in these crossroads. The Kremlin stands determined to keep Moscow a leading player in these regions through a combination of bilateral and multilateral initiatives, including arms sales, while China has become an important economic partner for all these countries.

Due to limited Western business interest in their markets, Central Asian countries have strived to attract investment by joining the Beijing-controlled Belt and Road Initiative (BRI) the Moscow-led Eurasian Economic Union, or other Chinese and Russian structures. The relationship with these blocs invariably makes these countries more beholden to China and Russia for commerce and capital, which compromises their economic autonomy. A State Department official shaping U.S. policy to Central Asia acknowledged that, “we’re not in a position to compete with China in terms of… offering the kind of infrastructure investment that China offers.” Since neither the Obama nor the Trump administration has been prepared to devote considerable resources to Central Asia, they both have appropriately emphasized the quality, rather than the quantity, of U.S. economic ties. They also have relied on private U.S. corporations, targeted government security assistance, and programs that exploit U.S. skills in education, renewable energy, management training, and other niche fields.

Due to perennial doubts about U.S. staying power, U.S. officials have found it challenging to reassure these nations of continued support. By impeding international travel, the COVID-19 virus will make it even harder for the United States to maintain a high profile in Eurasia by regularly engaging local leaders. Diplomacy and exchange programs must rely more on Internet-mediated exchanges. The COVID-19 virus likewise requires changes in U.S. military engagement, such as joint exercises, military exchanges, training and education programs, terrorism task forces, and other Pentagon-led regional security cooperation. Advances in information technology should allow for more significant distance learning, and computer-based exercises and simulations.

It is further challenging for U.S. officials to call for more support for U.S. policies regarding Afghanistan without given the impression that Washington remains fixated on an Afghan-focused prism. An additional tension exists between, on the one hand, encouraging countries to enhance border barriers against transnational terrorism, illicit trafficking of weapons and narcotics, and infectious diseases and, on the other hand, pressing them to relax impediments to transborder trade, cultural contacts, and other regional cooperation. In particular, many Eurasian states perceive connectivity with Afghanistan more as a security problem than a commercial opportunity.

Moreover, the United States has lacked strong and reliable foreign partners in the region. China, Russia, and Iran are overtly hostile to U.S. policies, while Europe, Pakistan, and Turkey have rarely pursued regional objectives in sustained close harmony with Washington. The United States and its most reliable international partners (India, Japan, South Korea, and the European Union) must enhance their collective leverage by better aligning their regional policies.

Photo by Zafar Khalilov/Xinhua via Getty