Coronavirus underscores Iran's internal struggle over its relationship with the world 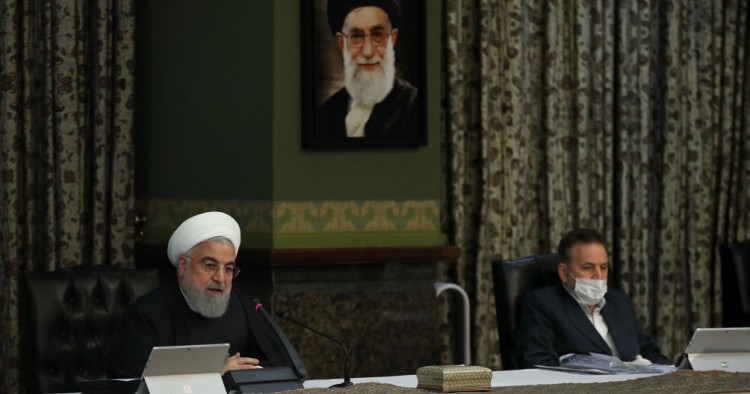 Iranian President Hassan Rouhani claims that Tehran has, all things considered, outperformed Western states in its handling of the coronavirus crisis. No one can deny that panic has set in across Europe and the U.S. as the virus has spread. But instead of gloating — for which there is no justification as Iran remains the third-most-badly-hit country in the world with some 1,300 people dead and another 19,000 infected — Rouhani ought to keep his eyes on some far more troubling signs closer to home as revealed by reactions to the crisis.

In need of crisis management in Tehran

Above all, there is the question of why officials in Tehran for weeks deliberately covered up the fact that the virus had arrived in Iran from China sometime in early January. This proclivity by Tehran to at first deny the existence of a crisis, and then act in a disorganized fashion when it finally does respond, speaks to two separate truths.

First, that a deep deficit in popular legitimacy seemingly obliges the regime to constantly misinform the public in order to keep the population placated. In an admission of this reality of deeply broken public trust in the authorities, Rouhani this week released a nearly one-hour-long clip of the cabinet’s meeting on the crisis. In the video, Rouhani tries to project the image of a crisis manager who is in complete control of the situation, quizzing each of his ministers about issues relating to containing the coronavirus and the availability of hospital beds. This PR stunt came after heavy criticism that Rouhani had failed to lead the nation in its hour of crisis.

Second, and more consequential, the coronavirus crisis is the latest reminder that political factions in the Islamic Republic continue to struggle over what kind of relationship the country should have with the rest of the world. The intra-regime factional rivalry is not so much about immediate crisis management as such, as has been reported by the Western media, which has focused on Rouhani’s petty competition against the Revolutionary Guards for the mantle of crisis “leadership” and scoring PR points. When push comes to shove, Rouhani and the Guards will coordinate through the Office of the Supreme Leader Ayatollah Ali Khamenei. Khamenei does not want the leadership role himself because nothing good will come out of handling the virus crisis, but he will also not allow it to become a full-blown regime crisis about jockeying for leadership.

That said, the different responses by various factions within the regime have a profound message about Tehran’s ability in the long term to return to the global mainstream. As Foreign Minister Javad Zarif has set out to lobby for international support for Tehran to secure a $5 billion emergency loan from the International Monetary Fund (IMF), voices on the extreme right in Iran are busy portraying any interaction with international institutions such as the IMF or the World Health Organization (WHO) as bowing to Western interests and selling out the regime’s militant Islamist ideals.

This reality of having to engage in a tug of war about what kind of relationship to have with international organizations has become almost the norm in Iran. For example, it is no different than the major fight in recent years in Tehran about whether or not the country should abide by the standards of the Financial Action Task Force (FATF). In February, after three years and six rounds of deadlines for Tehran to meet the anti-terrorism criteria of the FATF, Iran was added to the organization’s blacklist.

For the Rouhani government, abiding by the FATF’s standards was a no-brainer: unless Iran did so, its international banking and trade ties would be undermined since foreign partners would be far less willing to deal with Iranian entities. Even Russia and China, hardly supporters of U.S. sanctions on Iran, urged Tehran to stay off the FATF blacklist. But, as has been made clear yet again, President Rouhani is not the ultimate deciding voice in the Islamic Republic.

That role belongs to Supreme Leader Ayatollah Khamenei, and he and the hardline camp around him opted to ignore FATF’s ultimatums. If Rouhani was emphasizing the need to protect foreign trade ties, Khamenei and his ilk were far more worried about scrutiny from the FATF and what abiding by its standards would mean for Tehran’s ability to continue to send money to militant Islamist groups such as Hezbollah in Lebanon.

This tug of war in Tehran is nothing new and it will surely also be a factor as Iran deals with the impact of the coronavirus crisis. As an example, while Foreign Minister Zarif blames U.S. sanctions for Iran’s diminished ability to deal with the crisis, which might well be true, the more discernable reality is that the pushback against the Rouhani government’s request for a $5 billion IMF loan has so far mostly not been from Washington, but from hardliners in Tehran.

The same hardliners who sabotaged Iran’s efforts to stay off FATF’s blacklist are now calling the request for an IMF loan another desperate effort by Rouhani’s “Western-obsessed” government. Iran is not the only country that has struggled with this unprecedented health crisis. What stands out about its response though, more than anything else, is that it showcases the ongoing fight in Tehran about what kind of relationship the country should have with the outside world.

To become a member in good standing of international organizations, such as the FATF or the IMF, is a two-way process that requires both give and take. Tehran has every right to receive financial support from the IMF or assistance from the WHO, like any other country impacted by the coronavirus and attempting to deal with its consequences. If nothing else, hopefully this crisis will push the Islamic Republic toward a less schizophrenic approach to the outside world. After all, the notion that the Islamic Republic can be both a “normal” state and a “militant revolutionary” one at the same time has already been debunked.

Alex Vatanka is a Senior Fellow and the Director of MEI's Iran Program. The views expressed in this article are his own.

Photo by Presidency of Iran/Handout/Anadolu Agency via Getty Images