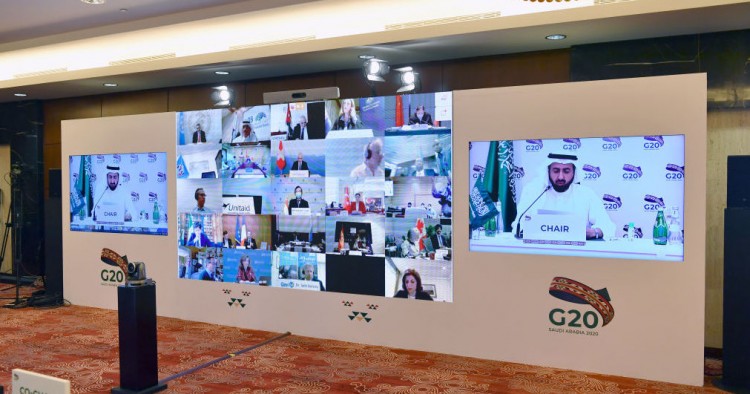 While COVID-19 and historically low oil prices are disrupting the Gulf’s political economy, the pandemic has demonstrated the region’s tech resilience. Since the 2010s, the Gulf has witnessed an upward trend of data outflow and historically high rates of social media and smartphone penetration. Simultaneously, the Gulf Cooperation Council (GCC) governments — particularly those of the United Arab Emirates (UAE), Bahrain, and Saudi Arabia — have been directing vast resources toward the digitalization of their infrastructure by creating the needed institutions, amending legislation, partnering with “Big Tech,” and building local human capital. The COVID-19 pandemic has certainly been the biggest test of the Gulf’s digital infrastructure to date, but the region has proved to have formidable digital resilience.

The pandemic caught the world by surprise and caused significant disruption, especially during the transition to remote work. The UAE reaped the benefits of its long-term plans such as the National Innovation Strategy, the Artificial Intelligence Strategy 2031, and the Blockchain Strategy 2021, all of which laid the groundwork for the country’s COVID-19 digital response. The transition to remote work, school, and business was recognizably swift, efficient, and resilient.

For instance, Dubai’s Paperless Strategy created a digital national identity for 300,000 registered users — including citizens, residents, and visitors — and gave each an account from which they could access 5,000 nationwide government and private services. The system also enabled the use of digital signatures for documents and transactions, as well as the ability to request and share data with service providers digitally.

Technology played a more significant role in the health response. The UAE’s Department of Health developed the TraceCovid app to trace individuals who came into close contact with people later diagnosed with COVID-19. Additionally, Dubai police have a state-of-the-art monitoring system called Oyoon (“eyes” in Arabic), which watches the emirate’s 3.3 million residents. With a huge network of cameras in the city, Oyoon uses facial, voice, and license plate recognition to gather data, and feeds the collected information into a shared government database for cross-referencing. To counter the pandemic, this database and network is being used to enforce lockdown rules.

The UAE is known for its data sovereignty doctrine, most notably applied in 2013 when the government blocked access to voice over internet protocol (VoIP) services, including Skype. To counter the economic fallout from COVID-19 and help businesses transition to remote working, the country has lifted its ban on VoIP services, as well as that on the popular video conference apps Teams and Zoom. However, there are serious doubts as to whether the UAE will continue to allow VoIP services after the expected return to the pre-COVID-19 work environment. Unquestionably though, the country will emerge from the crisis more confident in its digital systems and its ability to withstand a global pandemic.

With its continued institutional investment in technology infrastructure and legal frameworks, Bahrain — despite its small size and population — has steadily grown into a technology hub. To compete with other regional tech hubs like the UAE, Bahrain offers 30-40 percent lower operating costs, in addition to a central location in the Gulf and a tech-savvy population. However, the kingdom gained its position as a sought-after hub for global tech giants because of its regulatory environment, which was the product of decades of reforms: the data protection laws, the bankruptcy law, and the allowance of full foreign ownership in most industries and sectors.

Bahrain is a regional leader in digital infrastructure, as well as one of the first nations to introduce a nationwide 5G network. As a direct outcome of Manama’s efforts, Amazon Web Services launched its first cloud center in the Middle East in Bahrain in 2019, adding to the growing list of cloud choices for enterprises in the region.

When the COVID-19 pandemic forced both the government and private sector to shift to remote work, Bahrain’s digital infrastructure ensured a swift and resilient transition. The kingdom also brought its digital capabilities to bear on tracing COVID-19 cases. Bahrain’s eGovernment launched a contact tracing app called BeAware, which involves infected individuals wearing GPS-tracked bracelets that report to government monitoring stations any movement outside of designated areas. The Ministry of Health may randomly request pictures from self-isolating individuals, who must send back a photo proving they are wearing the bracelet.

The private sector is using Bahrain’s strong infrastructure to play a major part in countering the pandemic’s economic fallout as well. For instance, MVC Global and Cox Logistics will use blockchain and artificial intelligence to aid in the efficient distribution of food and medicines in the kingdom and the rest of the GCC market. Bahrain’s long-term reforms and investments created digital resilience for the government to oversee the transition to remote work, while the private sector had the space to test and deploy its solutions.

Saudi Arabia’s investments in technology have paid off in its fight against the pandemic. The kingdom has both the biggest economy in the Middle East and the biggest population on the Arabian Peninsula, but it used to lag behind its Gulf peers in technological development. With Vision 2030, Saudi Arabia initiated a national transformation strategy to shift from an oil-dependent economy to a digitally empowered one. It introduced legislation and frameworks, created institutions, and formed international partnerships. The kingdom also focused on introducing digital solutions in priority sectors — justice, health, electricity, culture, and tourism — with a clear goal of becoming the region’s tech leader.

The Saudi prioritization of digital transformation resulted in the gradual deployment of commercial 5G networks in 2019 in more than 20 cities. The launch of 5G also helped to boost the kingdom’s tech credentials among investors who are keen to invest in industries that would benefit from 5G capabilities, such as tech, finance, education, and the public sector. In addition, the government has introduced a host of smart tools that have proved effective and gained the public’s trust. For instance, the Ministry of Health updated its app, Mawid, which guides users on self-isolation and hospital visits, while the Ministry of Education utilizes the National Education Portal to provide educational materials and digital tools for students at home.

The pandemic coincided with the Saudi presidency of the G20 forum in 2020. This offered Riyadh an opportunity to lead by example by implementing an early lockdown, suspending the hajj and umrah pilgrimages, and using its position as the chair to coordinate the global response to COVID-19 on various fronts, especially in the digital sector. The kingdom advocated for digital response and recovery, and promoted collaboration with international organizations and the private sector, marking a shift in Saudi priorities. Vision 2030 laid the groundwork for the digital infrastructure that increased the kingdom’s digital resilience in the face of the pandemic, and thanks to its G20 leadership Saudi Arabia is now positioning itself as a tech leader in the region.

While the GCC states have not yet transformed from oil-powered economies to fully diversified ones, the reforms carried out and the institutional investments made across the Gulf in the 2010s paved the way for the region’s strong digital response to the pandemic and its fallout.

The UAE not only solidified its position as a regional tech hub but also proved that the country is a global digital pioneer. Bahrain, despite being the smallest nation in the Gulf, has emerged as one of its most digitally savvy governments with strong support from local and international tech companies. Saudi Arabia, which lagged digitally behind its Gulf peers despite its vast economy, has benefited from Vision 2030 by creating a resilient digital infrastructure that has withstood the crisis. Additionally, the kingdom’s G20 presidency is positioning Riyadh as a strong advocate for the role of technology in countering the pandemic.

Other countries in the Middle East would do well to learn from the Gulf’s digital investments when preparing for the future.

Photo by G20 Saudi Arabia/Handout to Xinhua via Getty Images