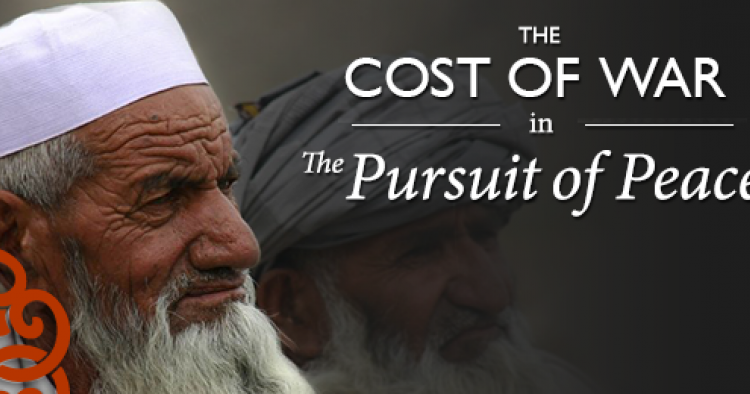 Since the overthrow of King Mohammad Zahir Shah in 1973, Afghanistan has been plagued by war — either war waged among ideologues (Marxists v. nationalists) or war marked by foreign invasion and occupation. The Soviet occupation of Afghanistan, which began in 1979, lasted a full decade. The post-9/11 U.S.-led occupation, now in its 11th year, is expected grind to an end in 2014, as stipulated in the Strategic Partnership Agreement signed by President Barack Obama and President Hamid Karzai on May 1, 2012, which outlines cooperation between their countries after the withdrawal of American-led international forces in 2014.

The Cost of War and the Pursuit of Peace

Despite the long period of internal strife and foreign invasion and occupation during which thousands of villages have been destroyed and millions of casualties suffered, the Afghan people have not succumbed. The staying power of Afghan resistance fighters, in particular, in the face of the awesome military might of the former Soviet Union and the United States is surely remarkable —and might also seem puzzling. After all, both superpowers employed their most advanced military technologies, with the exception of atomic weapons, in Afghanistan.

The Soviet and U.S.-led occupations exacted a heavy price. Moscow’s gambit rendered the Soviet system bankrupt and contributed to the demise of its empire. Since 2001, over 2,000 U.S. soldiers have died, some 20,000 have been wounded, and the country has spent approximately $264 billion ($2 billion per month for 132 months).

Yet, it is important to recognize the enormous toll on Afghanistan that these conflicts have taken. The monetary loss alone sustained by Afghanistan as a result of the Soviet war totaled about $620 billion. Since the U.S.-led occupation began, Afghanistan has suffered further misery, including 396,000 dead, 792,000 injured, and 65,000 civilian casualties plus the destruction of some 12,000 villages.

In recent months, the U.S. Administration has sought to engage the Taliban in negotiations in Qatar aimed at ending the war and, through the formation of a coalition government, ending the tribal and ethnic violence in the country as well. In light of the horrific costs of the war and the futility of continuing to fight it, this U.S. move is indeed a wise one.

What could advance the prospects for a negotiated settlement with the Taliban? Perhaps a deeper understanding of what lies behind the Taliban’s determination and resilience in the face of overwhelmingly superior military forces could shed light on this question.

1. Pashtun Perceptions of History—Moral Force: The Taliban, who are the backbone of the resistance against U.S.-led occupation of Afghanistan, are Pashtun tribesmen residing in Afghanistan and Pakistan. It is worth mentioning that the Pashtun — the largest single tribe in the world (numbering approximately 30 million) — conquered India seven times and experienced invasion by Alexander the Great, the Mongols, Great Britain (four times), the Soviet Union, and the United States. It is axiomatic that the way a nation/people perceives its history has a strong influence on whether its society can resist foreign domination. Taliban believe that history is on their side. This strong conviction has been an invaluable moral asset in resisting a desperate war against an “invader” possessing massive advantage in mobility, fire power, wealth, and political cohesion.

2. Upholding Family Honor: Family is the most important unit of social organization. It is an impermeable and self-contained unit, extending to clan and tribe. The system is egalitarian, democratic, and individualistic. Despite varied ethnic and linguistic groups, their value system is congruent in matters affecting their freedom, dignity, and religion. Any system that attacks the integrity and honor of the Afghan family–clan–tribe is bound to face severe retaliation. Those members of the family–clan–tribe who are killed in the act of resisting foreign invasion or occupation are viewed as martyrs; their surviving family members are expected to pursue resistance to the end.

3. The Value of Fairness: The Taliban are not fanatical about ideologies or political causes. They do not share the Islamic fanaticism of some Pakistanis and Arabs. They are traditional Muslims who have a strong belief in the concept of fairness. They reject invasion by foreign forces as unfair and will resist at any cost. Although one of the most prized values in Afghan culture is bravery in combat, Afghans do have a propensity to settle differences with enemies if they regard such a settlement as being fair. Generally superb bargainers, they are, at times, stubborn and inflexible — adhering to a position, even if unreasonable, to the bitter end.

Historically, Afghans have employed guerrilla warfare and displayed a stoic acceptance of death in the face of vastly superior firepower. Indeed, the Taliban’s hit-and-run tactics — used so effectively against U.S. and coalition forces — are reminiscent of those used by Afghans against Soviet forces and against the British before them. So, too, are the qualities of courage and physical toughness of the Afghans. However, these tactics and qualities are rooted in deeply held Pashtun perceptions of their own history, the transcendent importance of family honor, and the premium placed on the value of fairness.

The United States has encouraged peace negotiations between the central government and the Taliban. However, the prospective peace negotiations with the Taliban could suffer from communication and structural dissonance if the cultural imperatives are not appropriately considered. For a successful outcome, the negotiators must be treated with dignity and respect, keeping in mind that the political culture of Afghans rejects external authority and emphasizes freedom and independence. It is unlikely that the Taliban would acquiesce to a coalition government headed by President Hamid Karzai. On the other hand, if the Taliban have any role in government, they would almost certainly oppose the current malaise of corruption, drug production, warlordism, and drug-related criminality.

At the May 2012 NATO Summit in Chicago, the U.S. and its Alliance partners, along with Afghanistan and interested parties, determined to scale back the Afghan war, continue to pull out foreign troops beginning in 2012 and 2013, and to withdraw most of 130,000 American troops in 2014. Ostensibly, all parties were in agreement except Pakistan, which has blocked the movement of supplies and equipment reaching Afghanistan through Pakistan and thus interfered with the process of withdrawal. Nevertheless, the U.S. and others are ready to move beyond these issues.

The warring parties have sustained enormous damage in blood and wealth. The U.S. leadership’s decision to proceed with a phased military withdrawal is wise and humanistic. However, the idea of providing more military aid to the central government is counterproductive; it will inevitably lead to Afghans killing Afghans. Furthermore, a national army of 322,000 soldiers is not financially sustainable. Approximately 100,000 should be sufficient, particularly if Afghanistan reinstates conscription and thereby maintains a force whose ethnic composition reflects that of the population.

Indeed, more military aid may not be what Afghans need to quell the insurgency and move forward. But job creation is. The current unemployment rate is estimated at over 40%. If the rate can be reduced to below 10%, the insurgency will surely dissipate. Afghans must determine to build up their country by exploiting their natural resources, developing agro-business, creating tourism, and maintaining friendly relations with neighbors and the rest of the world. It would be prudent for the U.S. and other members of the international community to direct their resources to support such efforts.