Details of Khamenei’s Meeting with I.R.G.C. Commanders after Syria Strikes 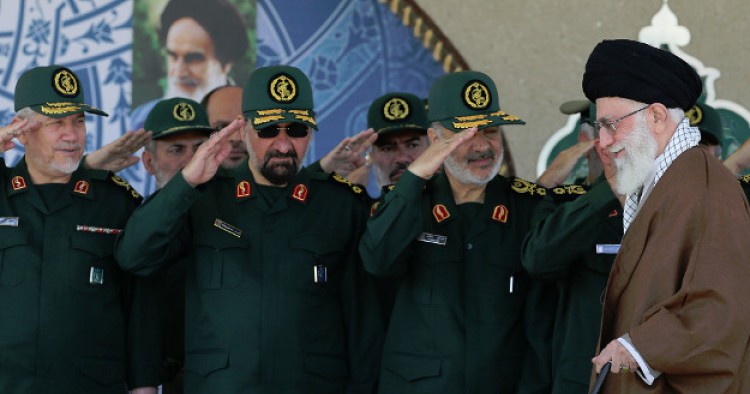 The official website of Supreme Leader Ali Khamenei has released some details about his meeting with top Islamic Revolution Guards Corps commanders within hours after the I.R.G.C. launched missile strikes against Islamic State positions in Syria more than two weeks ago. In a short video posted on the Supreme Leader’s website, Khamenei hails the I.R.G.C.’s “excellent” work as an “act of worship” and encourages the commanders to put further emphasis on developing the country’s missile program. “Keep working on missile as much as you can. Notice how sensitive the enemy is about missile so you should understand how important your work is,” he tells the gathering. “The enemy should be slapped in the face,” he adds. I.R.G.C. commanders present at the meeting also present details of the Syria strikes to the Supreme Leader.

Comment: On June 18, the I.R.G.C. said it had launched several against Islamic State targets in Syria in retaliation for the June 7 attacks in Tehran claimed by the terrorist group. An I.R.G.C. statement confirmed that it fired medium-range missiles from bases in the western Iranian provinces of Kermanshah and Kurdistan and killed a "large number" of Islamic State terrorists in Syria’s Deir Ezzour Province. “The message of this revolutionary and retaliatory action is very clear: The Islamic Revolution Guards Corps warns Takfiri terrorists and their regional and international sponsors that if evil actions against the Iranian nation are repeated, the revolutionary wrath and flames of revenge by the Revolutionary Guards will engulf the perpetrators and their supporters,” said the statement posted on the I.R.G.C.’s official website. It added that the I.R.G.C. had made it clear that it would not “let the spilling of any pure blood go unanswered.”

Soon after the operation, Iranian leaders made it clear that the strikes were not intended to send a message to the Islamic State alone. The I.R.G.C. had extensive military assets - including thousands of militia forces - to retaliate against the Islamic State. By launching the missile strikes, however, the I.R.G.C. wanted to project power at home and abroad at a time when its credibility was at stake. “The Saudis and Americans are especially receivers of this message,” I.R.G.C. Spokesman Ramazan Sharif was quoted by the Iranian media as saying. “Obviously and clearly, some reactionary countries of the region, especially Saudi Arabia, had announced that they are trying to bring insecurity into Iran."

Iranian leaders also emphasized that the country would defy U.S. pressure and further upgrade its missile program. The Iranian Parliament said in a statement that the missile strikes showed U.S. sanctions against Iran have been meaningless. Iran’s missile activity has been a constant source of tension between Washington and Tehran in recent years.