Egypt, Hamas Continue Flirtation, but to What End? 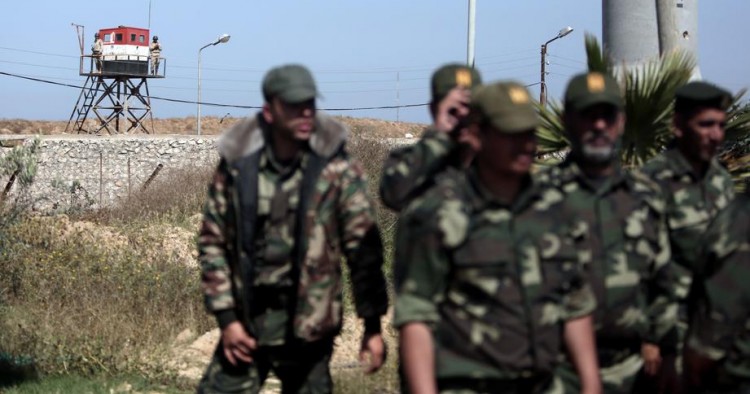 Egypt and Hamas continue to explore potential cooperation against a common threat in the Islamic State in the Sinai, as well as on the domestic Palestinian scene. Egypt's Public Intelligence Chief, Khaled Fawzy, hosted the Vice President of Hamas’s political bureau, Ismail Haniya, and his associates Rawhi Mushtaha and Moussa Abu Marzouk for several days of consultations in late January.

Sources familiar with the talks say Fawzy and the Hamas team reportedly spent hours at the el-Qobbah intelligence HQ going over files on ISIS personnel and armaments now threatening both parties. The Sisi government knows it needs to restructure its arrangement with Hamas if it is to effectively cope with the rise of ISIS and other Salafist groups.

The recent attacks on Coptic Christians in el-Arish and the launching of rockets at the Israeli Red Sea town of Eilat show that Palestinian Gaza and Egyptian Sinai have emerged as key operational and recruitment centers for the Islamic State.

While Hamas remains firmly in control of Gaza City, more men are wearing ‘Pakistani’ waistcoats and increasing numbers of women are enveloped in full burqas. Salafi strongholds have taken root in Jabaliya and Rafah, both strategically located at either end of the strip.

“Egypt’s conclusion that it needed to work with Hamas coincided with the suppression of the Salafis,” said Mukhaimer Abu Saada, a political scientist at Al-Azhar University in Gaza. “Hundreds were rounded up, put into jails and treated very badly.”

Leaders of that controlling force showed up again in Cairo early this month to follow up on the situation in the Sinai and the state of play on the Gaza-Egypt border.

Talks with Hamas leaders also point to Egypt’s attempt to influence internal Palestinian politics. Egyptian relations with Abbas have taken a downhill turn in the past 12 months. Egypt’s security establishment has determined that Palestinian President Mahmoud Abbas is incapable of delivering a peace deal with the Israelis, or re-securing the Fatah movement’s dominance over Palestinian politics.

“Abu Mazen has nothing to offer to the Palestinian cause,” Safty tells Dahlan on a tape broadcast by the Muslim Brotherhood-affiliated Makamilin TV channel beamed into Egypt via satellite from Turkey.

The most significant political outcome of the engagement was Hamas’s agreement for Egypt to host a large conference of Dahlan’s Democratic Reformist Current on February 15-16 at an army run hotel in Nasser City.

Both Egyptian security and Hamas intelligence signed off a list of attendees that included disaffected Fatah members from Gaza.

Dahlan has been encouraged by Cairo to insert himself as a third force between the two established Palestinian groups. The rhetoric at the conference was stridently anti-Abbas and anti-Israel—music to Hamas’s ears.

But Hamas’s subsequent choice of Yehya Sinwar, the 54-year-old al-Qassam Brigades commander, to replace Ismail Haniyeh as chief leader in Gaza exemplifies the risks as well as the opportunities inherent in the dialogue.

On the one hand, Sinwar has directed tunnel building and organized arms smuggling. On the other hand, he has helped direct the crackdown on the Islamic State’s allies inside Gaza. Sinwar also has ties to Iran and it was his men who were intercepted by the Egyptians two years ago en route to a naval commando training course in Iran. Hamas badly needs Cairo to ease up on civilian travel and trade above ground to relieve the despair in Gaza.

After the meetings in late January, Hamas political bureau member Mahmoud al-Zahar told several Arabic language media outlets that a deal was imminent for Hamas to extend its crackdown on ISIS-affiliated jihadists in exchange for a breakthrough arrangement with Cairo allowing foodstuffs and construction materials into Gaza.

“We think we could reach $7 billion in yearly trade with Egypt if the crossing point was normalized,” Zahar said in January.

The arrival in early February of truckloads of fish—a rare commodity in Gaza because of Israeli naval restrictions—was celebrated as a successful lobbying achievement by Dahlan and the Hamas politicians.

Israeli security concerns about the dangers of unsupervised imports of dual military/civilian use construction and agricultural materials are balanced with the hope that increasing Gaza’s dependence on Egypt would reduce Hamas’s inclination to enter into military conflict with Israel.

Those prospects notwithstanding, Egypt is well aware of Israeli reservations over the normalization process with Hamas, and the zero tolerance policy for continued tunneling demonstrates the limits of this reconciliation.

After the Egyptian army detonated another tunnel under the Rafah border on February 25, Hamas condemned Cairo's "dangerous ways of dealing with people in Gaza Strip," and the new leader Sinwar delivered a veiled threat to the Egyptians, declaring “the blood of our people will not be spilled for free.”

The default mode for Egyptian security would be to slam shut the gates at the Rafah crossing until Hamas stops digging under the border. But the desire to re-insert Dahlan as a major figure inside Palestine is likely to modulate Egypt’s handling of any renewed tensions.

Over the past four years, close ties between Sisi’s Egypt and Israel distanced Cairo from both Hamas and Fatah. The emergence of Turkey and Qatar in regional politics also reduced Egypt’s position as the indispensable broker on the Arab-Israeli scene.

The Sinai insurgency and economic challenges have driven Egypt to play more cards in the region’s shifting geostrategic reality, and Cairo will continue to promote Dahlan as part of an anti-Abbas agenda that also suits Hamas’s aspirations.