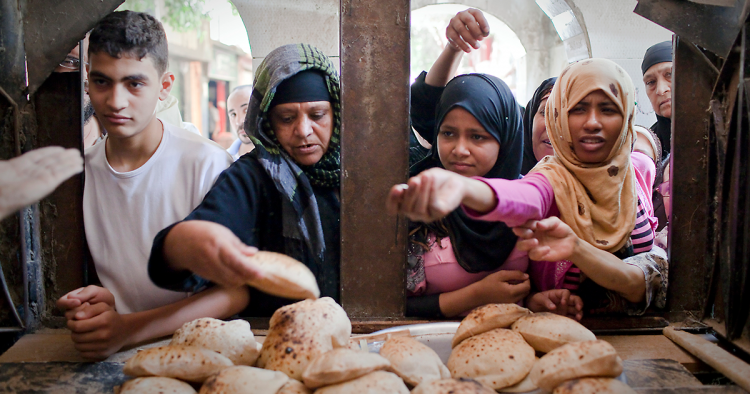 Speaking at a public event earlier this month, Egyptian President Abdel-Fattah el-Sisi made the surprise announcement that the next step in the country’s economic reform agenda will include the removal of bread subsidies. He becomes the latest in a long line of presidents to target the bread subsidies that provide cheap sustenance to a country of (now) over 100 million people at a huge cost to the state, although none of his predecessors ever successfully managed to remove or significantly reduce them.

When bread subsidies are discussed in Egypt, the main reference point remains the 1977 bread riots that occurred under the leadership of President Anwar Sadat, who introduced a short-lived policy lifting subsidies on rice, flour, and cooking oil, among other decisions. Riots subsequently erupted among the most vulnerable communities who would be hardest hit. While they only lasted a few days, the state immediately walked back the decision and reinstated the food subsidies, which have endured to this day.

With inflation and a rapidly increasing population, the subsidy program places a heavy burden on the state. It is estimated that approximately two-thirds of the population, or some 70 million people, benefit from bread subsidies. First set in 1988, the price of a loaf of bread remains at EGP0.05 (5 piasters), even though the actual cost is now around EGP0.65 (65 piasters). Over the years, the standard weight of a loaf has decreased, however, from 150 grams in the 1980s to 90 grams today. The bread subsidy scheme currently costs the government around EGP48 billion ($3 billion) per year.

The decision to remove bread subsidies is not a surprising one, when considering that this president has tasked himself with eradicating or reducing a number of historical economic burdens, nor does it come as a complete surprise. In 2015, President Sisi announced the shifting of the subsidy from flour to loaves of bread, aiming to curb growing waste and corruption among beneficiaries. The “smart card” scheme that was introduced to put this system into effect — a program initially floated under former President Mohamed Morsi, but never implemented — was hailed as a success.

With the signing of the $12 billion IMF loan agreement in 2016, Egypt enacted a four-year program to slowly lift fuel and electricity subsidies. Under President Sisi, parliament has also introduced legislation that limits rice farming (2018) — aimed primarily at tackling the water insecurity crisis the country faces — and recent legislation seeks to reduce water consumption, introduces penalties for water wastage, and would impose fees for irrigation.

The legislative system in Egypt is by and large heavily skewed toward the agenda of the executive, although that is a well-established norm and not a recent innovation. Through questionable elections, organized and run by the intelligence apparatus, pliant parliaments have been successively installed since 2015. Legislation introduced to parliament is either created within the government or the presidency or originates from within the security apparatus. While the parliamentary process (through relevant committee stages) offers the opportunity for public engagement and consultation, this has been sporadic at best. At times of heightened political tension civil society has been invited to engage with parliament, although this is viewed by engaged actors as mere optics and remains limited to consultations over the NGO law and other related legislation. There have been other moments where public mobilization has engaged the government and successfully changed the state’s approach, such as the anti-coal lobby, but these remain very rare.

Over the years, however, there has been little engagement with the public, and in some cases little to no warning over the introduction of impending changes to the subsidy program. It is notable that President Sisi chose to make this announcement about bread subsidies before any material changes were introduced. Previous legislation or executive decisions, therefore, have resulted in little to no public buy-in, with the public expected to silently absorb the continued increase in the cost of living, and those most vulnerable largely left without the support of adequate social safety nets. Sporadic protests — albeit short lived — have been seen at various times when these ad-hoc decisions are suddenly made, such as a large increase in transport fees and fuel price hikes. Even the IMF deal in 2016 came with little warning, as citizens awoke to find the local currency had been devalued by almost 50%, while fuel hikes were introduced simultaneously.

While this model of decision-making is entrenched in Egypt’s governance style, its impact has been arguably felt more acutely over the last eight years, as President Sisi makes fundamental changes to Egypt’s economy and has chosen to tackle some of the state’s heaviest financial burdens. By all accounts economists agree that these measures are necessary, but the way in which they are enacted is not conducive to a positive and inclusive governance approach. Recent rice farming laws, for example, have left tens of thousands of farmers with no options to recoup lost income or effectively use their land, while restrictions on water consumption and imposed water pricing have had knock-on effects on consumer prices, affecting purchasing power.

Just this month, central bank figures released show that annual core inflation has risen to its highest levels since mid-2019, while headline inflation was also up in July to 6.1%, the highest figure recorded since January 2020. Projections for the rest of the year suggest that prices will continue to rise, with increasing inflation. Although these trends have not alarmed emerging market specialists or local economists, they continue to increase the economic pressure on the public. By and large, Egyptians have not fully absorbed the massive impact of the 2016 subsidy reform plan, as the middle class has been squeezed to its limits, and more and more citizens fall into poverty.

With the COVID-19 pandemic creating additional economic stress, some 30% of the population is now in poverty (although the official statistics agency, CAPMAS, sets the poverty line at around $1.45/day and the extreme poverty line at less than a dollar a day, starkly lower than the World Bank). Egypt’s social programs to support the poorest are mostly hailed by the international community, but the country's development indicators suggest they fall far short of what’s needed to help the millions who require state aid. Moreover, the middle class is excluded from accessing social safety nets, even as reform plans take a growing economic toll.

President Sisi’s attempts to tackle a subsidy regime that places such a significant burden on the state budget is commendable. Indeed, the announcement has been welcomed by many within the country, including parts of the current government, although notable officials have raised concerns that lifting the bread subsidy in its entirety would unnecessarily harm the Egyptians most in need. While alternatives such as a sliding scale of subsidy removal have been suggested, this president is one who sells much of his political power on his statements and commitments. Whether President Sisi will face significant pushback over the announcement is likely to have little impact on his desire to move forward.

To date, save for major reforms to the public sector (in an early attempt to reduce the wage bill) in 2016, the president has not seen any material opposition to these kinds of reform decisions, despite the significant economic pain some of them have entailed. While there is little opposition among elite circles and economists to the idea of reducing or removing the bread subsidy, the most vulnerable members of society that will bear the brunt are unable to access the legislative process or engage with those involved. With no public discourse on the issue, they have become almost invisible, lacking political standing or representatives to support them and their advocates.

The need for public consultation

Civil society should be allowed a vocal and public role in consultations with those crafting the law, including parliament and relevant ministries. The business elite and economists should be engaged by government, including the Ministry of Finance and the central bank, as they create these policies and adequate communication plans, which can be emphasized by engagement with the international community, including international financial institutions such as the IMF and World Bank that have invested heavily in Egypt over the last decade.

Meanwhile, citizen access to lawmakers should also be expanded, to allow those most vulnerable to engage with their representatives, while the media — although highly politicized and lacking independence — can be a powerful tool to create political pressure to provide an inclusive process. With little to no oversight over executive authority and a pliant parliament that rarely challenges the president or security apparatus, public pressure is arguably the only avenue to advocate for a consultative approach.

In pledging to remove the bread subsidy completely with no substantive consultation across institutions or with the public, President Sisi is reinforcing his model of governance that denies the people a role. In effect, he is making as much of a statement about his hold on power as he is a commitment to reforming Egypt’s economy. By targeting arguably the most political and enduring of Egypt’s subsidies, President Sisi could upend almost a century of food subsidy policy. It is a monumental moment, worthy of a more inclusive and consultative approach. It is imperative to acknowledge and engage citizens and non-governmental stakeholders to implement meaningful reforms that can not only fundamentally change the country, but aim to end the vicious cycle of poor governance and political shocks that has prevented the enacting of such reform for so long.