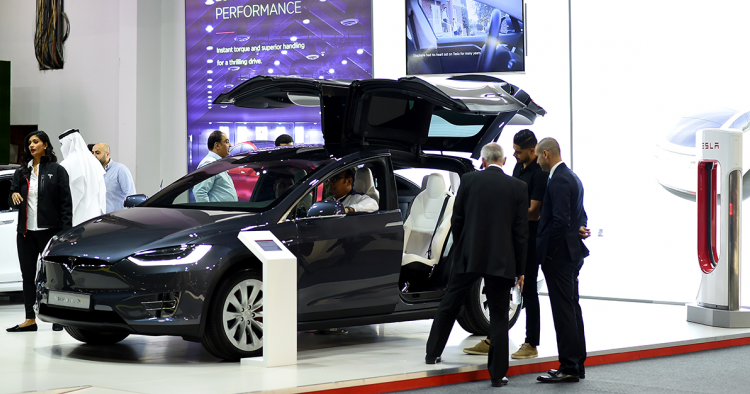 “Get an electric vehicle!” This might be the first idea that comes to mind when considering how to reduce carbon dioxide (CO2) emissions from transportation at the community level. Fossil fuels are widely recognized as a significant source of emissions due to the large amount of CO2 they produce when burned, but what about the emissions associated with electric vehicles (EVs)?

Globally, people have shifted toward electric cars in an effort to “go green” and support the universal goal of net-zero emissions by 2050, and to limit global warming to no more than 1.5°C, as called for in the United Nations’ Paris Agreement. Additionally, the World Bank Group has advocated for the decarbonization of the energy and transport sectors by halting investments in upstream oil and gas (2019), and pledging to invest 50% of climate finance in the Middle East and North Africa (MENA) region in interventions that help to build resilience, guided by regional and country-specific demand.

In line with these goals, governments in the MENA region have been motivated to encourage their populations to purchase EVs instead of conventional ones that run on gasoline. The UAE, for instance, has launched a regulatory policy for EV charging infrastructure and established the “EV Green Charger Initiative,” a free network of charging stations across the country. As a result, the popularity of EVs in Dubai has risen over the last seven years, with the total number in operation increasing from just 71 to 5,107. The Kingdom of Saudi Arabia has seen similar growth and is currently ranked in the top 50 countries worldwide according to the AlixPartners Automotive Electrification index, indicating 36% growth in the sale of EVs.

If the increasing popularity and demand for EVs is driven by a consumer and state-level desire to reduce CO2 emissions, it’s important to understand that they store and consume electricity that was generated from other sources, including fossil fuels and natural gas.

The MENA region is actively working on an energy transition plan that shifts away from fossil fuels, oil, and natural gas, all of which still account for the majority of energy generation portfolios for countries across the region. For example, until 2020, renewable energy and low-carbon sources accounted for less than 1% of total energy generation in Saudi Arabia, meaning EVs in the country likely relied overwhelmingly on fossil fuel-generated electricity. This is also the case in Morocco, often regarded as the region’s climate leader, even though renewables account for just two-fifths of the nation’s electricity capacity. So, the question becomes: Are EVs really as “green” and as environmentally friendly as their reputation suggests?

Regional governments are undertaking extensive efforts to shift energy production toward environmentally cleaner technologies for the benefit of both the climate and public health, but how quickly is that initiative progressing? What is a realistic timeline for green and renewable technologies (e.g., wind and solar) to become the dominant source of energy generation? And in the meantime, how should the international community view their environmental credentials?

The “green” reputation of EVs seemingly disregards the environmental impact of producing them, and especially the key component that enables them to store electricity: their batteries. These batteries are manufactured from various metals that must be mined. For instance, lithium-ion batteries (Li-ion), considered the top of the line for EVs and used by Tesla, require a number of metals besides lithium, such as cobalt, nickel, manganese, and copper.

The mining of these components comes with environmental concerns. In the long term, does the earth hold enough of these minerals and materials to support a full global shift to EVs? In the short term, the rapid increase in demand for batteries has created a new challenge of ensuring an adequate supply of natural resources. Some of these materials are already in short supply, due to supply chain issues associated with the global pandemic and the Russia-Ukraine conflict. This creates an artificial shortage and gives rise to opportunistic price gouging, whereby car dealerships are selling EVs at double their list price while manufacturers are heavily reducing their production.

Putting the price and supply dynamics aside, manufacturing these vehicles creates a tremendous environmental burden, as the process requires digging up and processing around 500,000 pounds of the earth’s crust to produce one battery.

While there is a broad range of lithium extraction methods available, the primary ones —including hard-rock mining and extraction of lithium from brine water — require large amounts of energy. These processes disturb the natural water table, local biodiversity, and the ecosystem of nearby communities. For example, nickel mining and refining practices have already resulted in documented damage to freshwater and marine ecosystems in Australia, the Philippines, Indonesia, Papua New Guinea, and New Caledonia.

Pollution from these operations not only impacts oceans and ecosystems, but also induces environmental hazards throughout the battery lifecycle from mining materials for their production to disposing of old batteries at landfills, creating health risks for workers and affecting nearby communities due to the toxicity of heavy metals such as lithium.

Taking these issues into consideration, just how much do EVs really limit overall emissions? And are they a path to net-zero emissions for the MENA region? Considering the environmental costs of EV production and usage, it might be more prudent for regional governments to first prioritize and achieve sustainable energy transitions before fully advocating for the use of EVs.

Athra Khamis is a Non-Resident Scholar with the Climate and Water Program at the Middle East Institute. Her areas of expertise include climate change scenarios, atmospheric composition, water resource analysis, environmental ecosystems, and sustainability.