In the face of Russian aggression, the West needs to strengthen European security and Black Sea partnerships 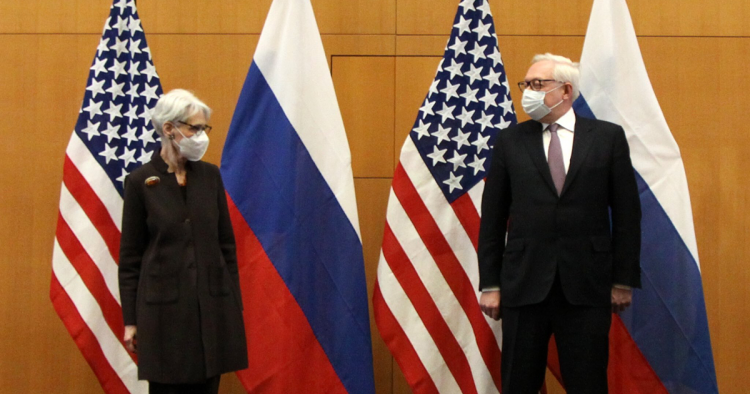 For months, Ukraine has been a central focus for Western foreign policy as Russia has continued its military buildup on the border, reaching 100,000 troops. Moscow has threatened to carry out a military attack and has now issued an ultimatum for the United States to bless a Russian sphere of influence over sovereign democratic countries such as Ukraine. But as consultations between the U.S. and Russia take place throughout the week, the West should bear in mind that Ukraine is only one part of the broader Russian problem. It is about all independent former Soviet states and essentially about the entire European security architecture. The U.S. and NATO cannot go over the heads of independent states and give into Russian demands; instead, they should buy time and invest in long-term European security, while refraining from rhetoric and ultimatums.

Russia is a revisionist power. President Vladimir Putin and his staff have confirmed that in the “ultimatum” drafts sent to Washington in two ways. First, by excluding European powers from participating in negotiations on the future of European security. Russia wants to negotiate exclusively with the U.S., in a format of conflict and resolution reminiscent of the Cold War. Second, by proposing what is in essence a revision of the outcome of the Cold War and the Soviet Union’s loss. With the two ultimatums for “security guarantees” Russia demanded a sphere of influence over Eastern Europe. The problem is that this sphere of influence is over independent sovereign democracies, such as Ukraine, Georgia, and the Baltic States. Russia is thus asking the United States not only to withdraw its own influence from them, but also to aid in the violation of independent countries’ sovereign rights.

This request is totally unacceptable. Accompanied by an ultimatum and a military threat against the United States and its allies (whether NATO members or not), the demand serves as an additional formal instrument of pressure to aid in something Russia has been working on for many years. Russia directly violated the sovereignty, territorial integrity, and independence of Black Sea countries through the creation of frozen conflicts in the early 1990s. Influence operations, economic blackmail, cyberattacks, and other hybrid forms of aggression from Moscow against the Baltic countries, Georgia, Ukraine, and many others, escalated in 2008, when Russia invaded Georgia. The illegal annexation of Crimea, war in Donbas, hybrid attacks against Georgia, military buildup in Crimea as a threat against allied territory, obstruction of maritime traffic in the Black and Azov seas, weaponization of energy, political and election interference, and disinformation campaigns are just some of the most well-known instruments Russia has employed across Eastern Europe. In recent years, more and more of these hybrid forms of aggression have targeted Western European states and even the United States. It is clear that what happens in the Black Sea does not stay in the Black Sea.

There are two arguments why today the West does not have much choice other than to buy time to prevent conflict in Eastern Europe. For one, the United States cannot decide over the heads of its strategic partners Georgia and Ukraine, which are independent and sovereign countries that want to join the West. Washington cannot go over the heads of the 74% of the Georgian population that wants NATO membership and paid the cost of Russian occupation of 20% of their territory. The other reason why the United States cannot give into Russia’s “security guarantee” ultimatums is because Russia not only conducts hybrid warfare against Georgia and Ukraine, but against most, if not all, NATO members, including the United States. This is not just about Ukraine and Georgia. Their security is vital to broader European security, and European security has been in the national interest of the United States for far longer than the Russian Federation has existed.

Given these two insurmountable obstacles, the West can only respond to Russia by repeating all of the hybrid forms of aggression and violations of sovereignty, territorial integrity, and independence Moscow has committed in places like Georgia ­— and across Eastern Europe — for decades. This new round of Russian ultimatums to violate NATO commitments to admit both Georgia and Ukraine will not be the last. The Black Sea region and Georgia and Ukraine in particular are where Russian aggression is at its most dangerous, but these two countries also serve as examples to the West for the steadfastness of their commitment to Western values — and of the extent to which those same values are under Russian attack. So this week, when the U.S. meets with Russia, it can only reiterate Moscow’s past aggressions and warn it that another invasion would not be in its interests.

Beyond that, the West should boost its investment in the security of its strategic partners like Georgia and Ukraine. For the moment NATO membership is politically almost impossible, but left without support, Georgia and Ukraine do not stand a chance in the face of Russian aggression. Overwhelming popular support does not buy defensive weapons. The United States has sent both countries defensive lethal weapons as part of the vital military aid it has provided, and the West has imposed serious sanctions on Russia since 2014. But more needs to be done to support Ukraine, which is facing an immediate military threat, but also Georgia, which since the 2020 Nagorno-Karabakh conflict is almost totally surrounded by permanently stationed Russian troops.

To address the military conflicts and security concerns, the West should also elevate the valuable partnerships it has with Georgia and Ukraine, which have served as a bulwark against Russian aggression. To better manage their security concerns and invest in the partnerships, the West should enable ad hoc NATO consultations with the two countries. Such an ad hoc mechanism would enable the coordination of policies and effective implementation of joint response measures against Russian aggression. This would also serve to elevate these key partners’ security concerns to a proportional level. The West cannot give into Russian demands for a sphere of influence. Instead, it should invest in its partnerships that serve as bulwark against Russian aggression.

lulia Sabina-Joja is a senior fellow with MEI’s Frontier Europe Initiative, the director of the Afghanistan Watch project, and an adjunct professor at Georgetown University. The views expressed in this piece are her own.